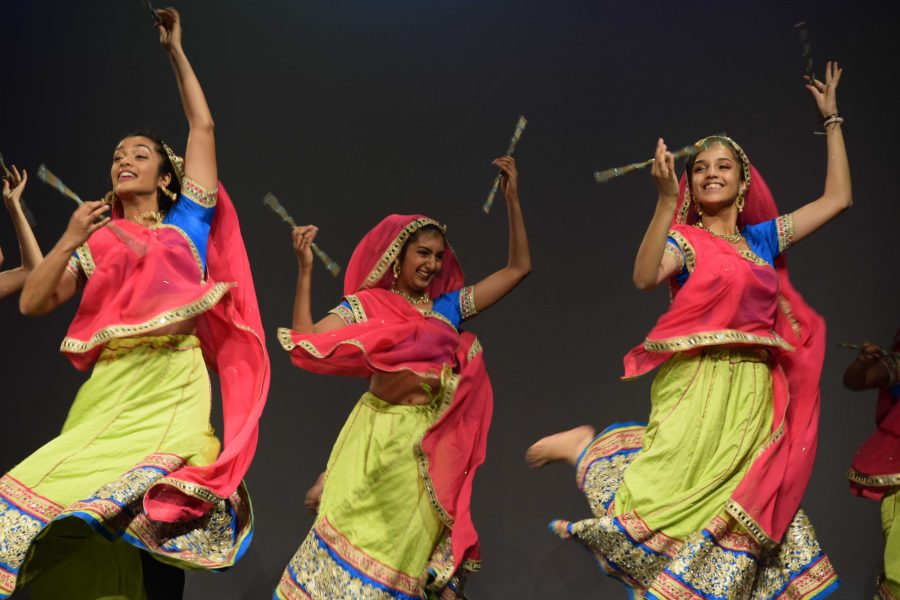 Michelle Wong
n a school where the student body is 83 percent Asian, influences from different Asian cultures are especially prominent. One such way for South Asian students to express their cultural heritage is through the numerous forms of Indian dance, whether it be on one of the MVHS dance teams or outside of school. From Bhangra to Raas — teams which recently became official MVHS clubs again — to Bollywood and classical forms of Indian dance, each style is unique in its own ways.

Junior Anjali Thontakudi has practiced Kuchipudi, a style of Indian classical dance that originated in the Indian state of Andhra Pradesh, when her parents introduced it to her at an early age.

“They would take me to different temples, let me watch the dance performances there and see how long I was interested in them,” Thontakudi said. “I watched a few of them and they were okay, but when I saw the Kuchipudi dance, I was entranced.”

Kuchipudi differs from other classical Indian dances in that different body movements and expressions are emphasized within it.

“Kuchipudi and Bharatanatyam are both pretty similar [because of] a lot of their feet positions and hand positions,” Thontakudi said. “But Kuchipudi is more about moving the torso with a focus on grace and expression.”

Thontakudi practices every Saturday morning at 8 a.m., but when she has major performances coming up, she has additional practices on weekdays from 8 p.m. to midnight. While she sometimes dislikes the time commitment, she still believes her decision to dance is worth it.

“It helps me forget about any stresses I have or anything I’m worrying about,” Thontakudi said. “When you’re on stage, you feel like a very confident, completely new person.”

her in classes at a studio.

“As a kid, [my mother] danced [Bharatanatyam] but then she wasn’t able to keep it up,” Suresh said. “When I was little, she enrolled me in dance classes as well, and as I grew older, I began to like dance more and more.”

Like Kuchipudi and other forms of classical Indian dance, Bharatanatyam has special features that separate it from other styles. The dance originated in the south Indian state of Tamil Nadu and is characterized by a squatting position in which a dancer stands on tiptoes with his or her knees moved apart.

Despite these minor difficulties, Suresh still believes Bharatanatyam is a unique and worthwhile experience.

In addition to Bharatanatyam, sophomore Divya Suresh also participates in the MVHS Raas team. When she joined freshman year, she did not have any particular reason to join Raas.

“As an eighth grader, I remember talking to [my friend] and she was like, ‘Hey, let’s try out for Raas next year,’” Suresh said. “I actually didn’t know what Raas was until I asked her later on. But it just was one of those decisions. It could have been anything.”

According to Suresh, Raas differs from other contemporary Indian dance styles in its costumes and props.

“Raas uses dandiyas,” Suresh said. “We wear skirts and dress up in blouses, and we do different types of footwork [that have a greater emphasis on the ball of the foot] than other types of dance.”

MVHS’ Raas team has practices every Friday after school for two hours, from 3:30 to 5:30. Suresh likes to see how the numerous practices translate into her dancing.

“I like how after how you repetitively practice a piece, it becomes so different,” Suresh said. “It’s cleaned up, your moves are more precise and it looks better when you dance.”

One memory from Andaaz that senior Dhruv Parikh looks back on fondly is when the music cut off during a performance at Cupertino HS his freshman year. Parikh remembers laughing as his team had to start singing the song while dancing to compensate for the lack of music.

“It was really awkward, but it was also really funny and we realized the hard way [to] expect the unexpected,” Parikh said.

From freshman year as an inexperienced dancer to senior year as the co-president of the team, senior Dhruv Parikh has progressed a lot during his time on Andaaz. While he wasn’t much of a dancer entering high school, a family friend who was captain of the team convinced Parikh to attend tryouts and workshops.

Although the team was initially called Bollywood, the name was changed to Andaaz after the team decided to also incorporate hip-hop and fusion with American songs. According to Parikh, Andaaz mainly resembles the Bollywood dancing seen in Indian movies with an upbeat tempo.

“It’s not just an Indian team where you just dance during Indian dances,” Parikh said. “It’s also more than just [a team] — it’s like a family.”

Although he had no dancing experience before joining Bhangra, freshman Krish Kumar is very passionate about the family he has found through the recently re-established Bhangra  club.

“Bhangra is a unique kind of dance that makes it special for other people to join in because it makes you feel a lot happier and more joyful with others you know and you make a lot of friends,” Kumar said.

According to senior captain Swati Chayapathi, Bhangra had disbanded in 2015 due to not meeting all of the club policy requirements, but has once again become an official MVHS club this year.

Bhangra, being from the northern side of India, is related to Punjabi folk dance. They also use saaps, which are X-shaped stick instruments.

Kumar described one of his favorite moments in Bhangra to be when he performs in front of a crowd and hears their cheers and sees their happy faces.  He emphasized that an element that makes Bhangra fun and unique is the family he found in the club.

“When you go into an audition and you make it, then it becomes a family to you because they’re always with you and you can act always normal with them,” Kumar said.