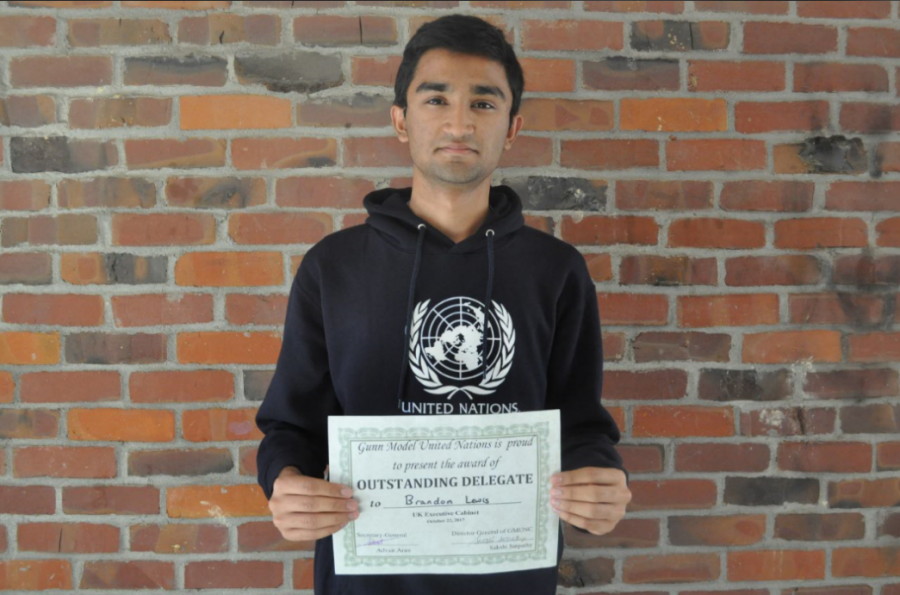 Chandramouly stands with his award. At the MUN conference at Gunn HS Chandramouly received an outstanding delegate award. Photo by Maggie McCormick.

uring the MUN conference on October 22 held at Gunn HS, junior Amit Chandramouly received the outstanding delegate award, a prestigious award that is only given out to a maximum of three delegates per committee. In MUN, there are four awards a delegate can potentially receive. Best delegate is the top award and is only given out to one delegate in each committee. Following best is outstanding, the award Chandramouly received, followed by honorable mention  and lastly a research award for delegates who wrote an exceptional position paper before the conference. Chandramouly explained that he received the award for meeting and exceeding the chair’s expectations of a delegate when he represented Brandon Lewis, the UK minister for immigration.

Though there is no set rubric for the awards, committee chairs look for delegates who demonstrate leadership, the ability to collaborate well in large groups, and who try to change the course of discussion in committee in their favor. Additionally, delegates who receive these awards have an understanding of how to speak according to their country’s policy and how the UN is structured.

“I’ve been doing [MUN] for a few years now,” Chandramouly said. “[So] whenever I go into a conference I have the mindset to end up in the top three.”

Even though Chandramouly sets out to receive awards at all the conferences he attends, he thinks that there is more to MUN than just a certificate. Learning how to speak in front of people effectively, how to understand and support a policy you’re representing and how relations between the UN members works is really the main purpose of being in MUN and not just getting the highest number of awards.

“I think that the distinction between the awards is everything you’ve learned from the conference, by preparation, and the committee during it,” Chandramouly said. “Each time you do [MUN] you experience something different. […] The main take-away is basically your outlook.”