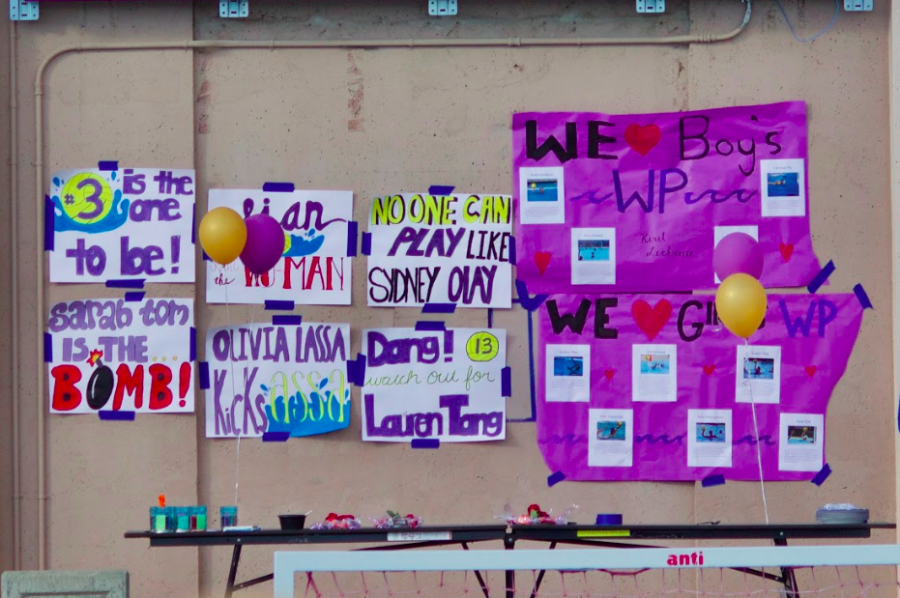 ith an array of posters lined up against the pool deck, and loud music blaring in the background, the MVHS girls water polo team got ready to celebrate their senior night against Fremont HS. The cheers for MVHS could be heard from the parking lot even before the game had started.

Before the game started, the players left the pool and clustered at the pool deck; the underclassmen went to a table on the side as they approached with candy necklaces and roses. The seniors lined up, laughing as their team tried to figure out the order of their speeches. Many seniors were holding back tears as they looked around the pool deck, seeing streamers spelling out “seniors” on the gates of the deck and a wall full of posters on the other side.

“The time I spent with them, I won’t get it somewhere else and I’m going to miss it,” senior Sian Yongyuth said.

Senior Lauren Tang shed tears as junior Jackie Loretto gave her speech, calling Tang a sister instead of a friend and thanking her for their friendship. At the end of it all, the two exchanged a hug as Lauren told Loretto how thankful she was. Wiping her tears away, Lauren flashed a bright smile as she looked at her sister, sophomore Emily Tang, as she put a necklace around her neck.

“I’m very sad because I play with my sister [and] I’m not gonna have my sister with me anymore,” Tang said.

Similarly, senior Sarah Tom smiled at junior Anika Cheerla as she described how if Tom was dissected, every part of her would have a special meaning. Cheerla ended her speech reminding everyone that this was not a permanent farewell and that they would see each other in a bit.

Each senior got their own speech from another player, along with roses and a candy garland around their necks. Though each speech highlighted a different attribute about each of the seniors, it created an atmosphere of love that was reflective of the team’s bond with each other. After all the speeches were delivered, MVHS got ready to play.

Jumping into the MVHS pool for the last time, the seniors hyped the team up more than usual. Just like any other game, the girls shouted their cheer into the gutter of the pool, but this time, it was louder than usual.

In the beginning, MVHS focused on their defense throughout the game as goalie junior Ashna Maheshwary repeatedly blocked FHS’ goals. Both coaches quickly became vocal, calling out players and enforcing plays. As both teams juggled possession of the ball, the first quarter ended with a score of 1-2, FHS in the lead.

As the second quarter started, FHS scored a third goal. However, two minutes in, the referee called time because of an apparent clock malfunction. FHS’ coach became more passionate, yelling at the referee, until a few more minutes were added because of the fact that no goals were scored in those two minutes. The game continued, and the quarter ended with MVHS lagging by two points.

By the end of the third quarter, FHS had scored two more goals. But MVHS bounced back in the last quarter, scoring two goals. The fourth quarter was spent with FHS trying to maintain their lead and MVHS repeatedly making shots but getting blocked everytime, even when the buzzer rang. MVHS’ final home game ended with a loss of 4-6, but the team didn’t let the loss dampen their spirits.

“Part of me wanted a senior game where it was easy to win so that every senior could showcase their skills,” senior Olivia Lassa said. “But at the same time, I’m glad we had the chance to play a difficult game because it shows that we’ve advanced far enough that our games are between teams we’re evenly matched with. That to me is a very fulfilling experience.”

Although most of the seniors had played water polo for four years, senior Sydney Olay along with Yongyuth joined the team this year, making it their first and last season. Both seniors were previously on swimming for three years, a sport they view as more competitive and cutthroat, with less of an emphasis on teamwork. However, time wasn’t going to stop the girls from bonding with the team, making water polo that much more fun and memorable for them. They regret not joining water polo earlier because of the family they’ve found, but are thankful for their experiences and bonds anyway.

“It’s really cool to rely on other people and work as a team,” Olay said. “I’m going to be really sad because I won’t be doing a sport for a while and I’m going to go home and not know what to do with myself.”

Other seniors like Tom brush aside the loss, not focusing on their defeat but rather what it felt like to play their last home game together.

The game against FHS meant more to the seniors than just their last home game. It was their way of looking back at their start and seeing their progress, and coming terms with parting with water polo and their team.

“I used to be the person who used to watch on the bench but now I’m shooting goals,” senior Neha Mylvaganan said. “It’ll take one or two weeks for it to set in that I’m never gonna play with these people again. I found a second family.”