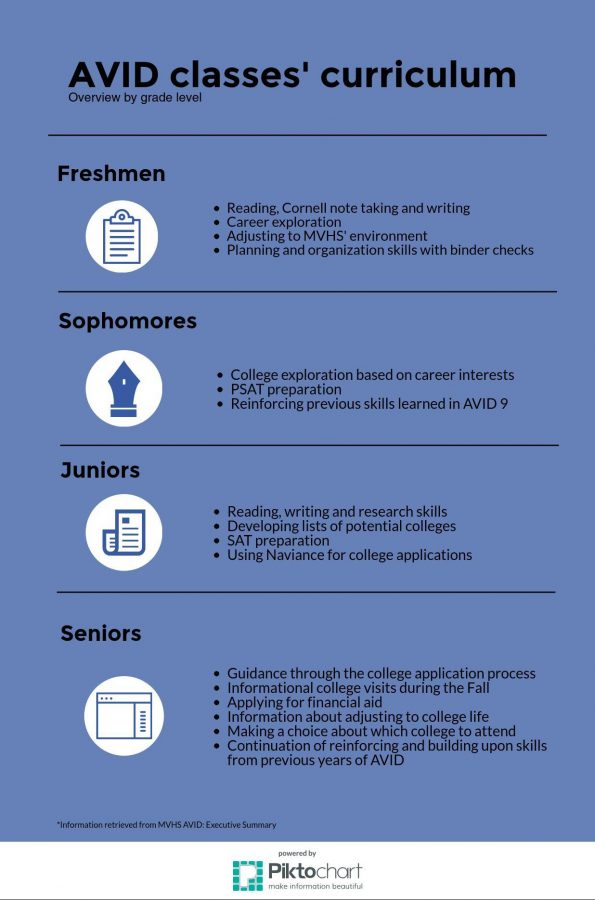 That’s the word senior Noah Soo-Hoo would choose to sum up his four years in AVID. The start of this experience traces back to when Soo-Hoo’s eighth grade teacher recommended him as a candidate for AVID, short for Advancement Via Individual Determination and a class that supports and guides students to succeed. 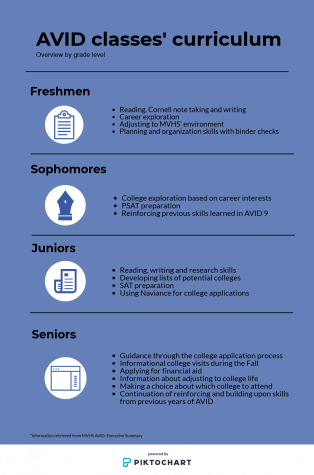 While Soo-Hoo was initially reluctant to take the class in his freshman year, the skills that AVID taught him and the friendships he’s made with his classmates throughout the experience spurred a change in his opinion.

One aspect that largely influenced Soo-Hoo’s opinion was the skills that AVID fosters in its students. For Soo-Hoo, the skills that he’s learned in AVID are applicable throughout his high school career but they aren’t necessarily taught in other classes.

“I learned a lot about organization, work ethic, the effects of sleep and exercise on your life, the effects of positive thinking,” Soo-Hoo said. “I was really happy to have that extra help because there’s not really any other class that would teach you organization here.”

Like Soo-Hoo, senior Apoorva Sirigineedi views AVID as a helpful tool in her academic life. Since as she moved to the United States during middle school, AVID helped her adjust to MVHS.

“I wasn’t really familiar with the whole high school process and how colleges here worked and such,” Sirigineedi said. “My counselors thought it was a good idea to put me in a class that would help me with college admissions and college readiness.”

Senior Olivia Lassa also sees similar merits in taking AVID, especially as she works through the college application process. She notes that the structure provided by AVID, which focused on college applications throughout junior and senior year, helped her be more proactive and prepared.

Besides AVID’s impact on her school life, Lassa also believes that the skills she’s learned in the class have an overarching application, as they can be carried over to other aspects of life as well. Lassa notes that AVID fosters essential qualities such as drive and initiative and equips students with the tools necessary for success in the future.

Sirigineedi’s experience reflects Lassa’s opinion, noting that AVID provided her with the initiative to build habits that facilitate success.

“It really helps me in academics because those are some good habits that I know I should have, but the class, at least initially, pushed me to create those habits in the first place,” Sirigineedi said. “Having some sort of incentive to start those habits was helpful and now the class doesn’t need to incentivize me. It just helps me create good academics habits.”

Even with the numerous positive benefits of taking AVID, Lassa and Soo-Hoo both comment on the stigma around those who are taking the class. For them, it’s not an uncommon experience to hear others make remarks about students who are in AVID, especially with assumptions about their intelligence.

“A lot of people treat it like, ‘Oh, this kid doesn’t know what he’s doing. He needs special help,’ but that’s not what it is,” Soo-Hoo said. “It doesn’t feel great to be labeled as something like that — [as] someone who can’t handle themselves.”

Lassa also believes that though this is the assumption many hold about AVID students, she completely disagrees with it. In her experience, AVID students show determination and have the capabilities for success but certain aspects, such as a lack of organization, may be holding them back from their full potential. According to Lassa, AVID provides the structure and an opportunity to unlock that potential in students, unlike the misconceptions others have about the class. However, Lassa notes that she has witnessed a gradual change in other students’ perspectives.

“The longer that I’ve been in AVID, the longer that people in my class have been aware of what AVID entails — it’s gained a different reputation,” Lassa said. “It’s definitely been spun in a more positive light and I really enjoy that.”

Despite any initial stigma around AVID, Soo-Hoo still values his AVID experience. Soo-Hoo notes that it is unlike any of his other classes, especially since staying with the same classmates for all four years of high school fosters a family-like environment.

For Sirigineedi, the relationships between classmates not only result in a close environment but also encourage collaboration and problem solving in the class.

“Every week, we meet a couple of times with our AVID classmates and we work on subjects that we’re having a tough time with,” Sirigineedi said. “It’s really helpful for students, especially if you’re too uncomfortable talking to the teacher or sometimes you just need a peer. Working with other people and figuring out the answer yourself — it creates good academic habits.”

Like Soo-Hoo and Sirigineedi, the tight knit and collaborative community is also one aspect that is particularly notable for Lassa.

“We could be doing a Kahoot, college research in groups, study sessions in groups, our tutorials that we hold within our AVID class,” Lassa said. “It’s just the memories of coming together for that group work and the feeling of not being alone for that, whether through just doing a game or through the academic group study sessions, is definitely such a powerful experience that I don’t feel very often with classmates in my other class.”