Not ‘It’: Russian Burger King accuses the movie ‘It’ of being an ad for McDonald’s 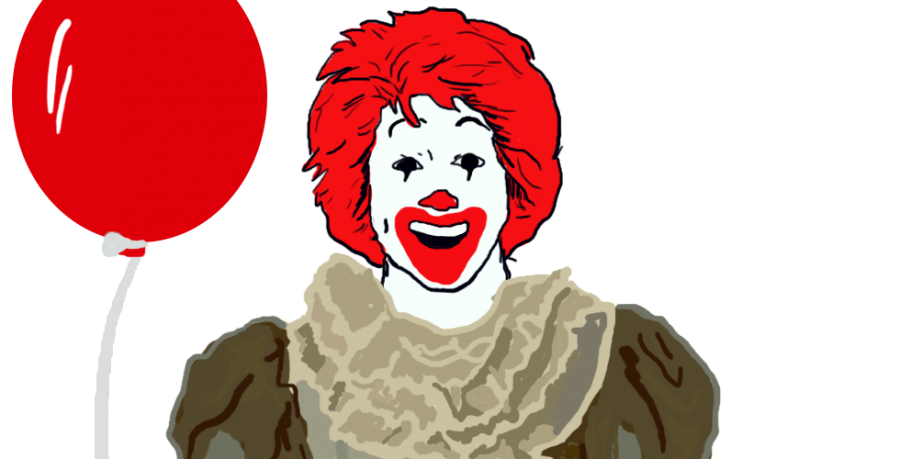 like many other people, scrambled to see the horror film “It” during its (no pun intended) opening weekend. I have always been a big fan of horror movies, usually catching the most popular ones in theaters with my friends, and this was not an exception.

Stephen King’s “It” has remained in the news much after its (I swear this isn’t intentional) release, breaking records and maintaining the number one spot in the box office for two weeks. So it was pretty normal when, weeks later, I saw a VICE news story about the film pop up on my phone while I was waiting for my ride after school … or at least that’s what I thought.

Reading the article, I learned that the Russian branch of Burger King has been trying to get “It” banned from theaters in Russia. Why, you might ask? According to Burger King, the popular movie is a giant advertisement for its largest competitor — McDonald’s.
They’re arguing that Pennywise, the dancing clown from “It,” is virtually “identical” to Ronald McDonald, citing his “color scheme” and “the [balloons] with which the clown lures children” as examples — and yes, before you ask, this is real. I could barely believe it myself.
Now personally I wouldn’t think that watching a clown who eats children would make someone want to give their money to another clown that’s trying to sell you fast food, but hey, to each their own.

But wait, it gets better.

In response to “It” being so successful, Burger King released a promotional ad featuring the horror movie on October 5. Alongside the Burger King logo, the company displayed its interpretation of the film in several theaters in Russia: “The moral is: never trust a clown.” In all fairness, that’s a pretty smart marketing move and sure got a laugh out of moviegoers, but it also makes things really confusing.

They even went as far as to call the horror film “Burger King’s longest ad ever” which is pretty ironic considering that just a month earlier they were taking legal action because they thought it was promoting McDonald’s. Kind of like myself, Burger King doesn’t seem to know if it hates Pennywise or loves him.

I think it’s clear that this may not be the most solid connection, but the Russian Anti-Trust Federation still told The Reporter that they were investigating any potential product placement or advertising in “It.” Not exactly the Russian scoop I expected VICE to be reporting on, but I’m not complaining — it’s rare that the news can make me laugh nowadays.
All joking aside, it’s important for us, as consumers, to be aware of what our favorite businesses are doing. We decide what we do with our money, and consequently, what we are supporting. If our favorite restaurant starts doing things that we don’t agree with, it’s up to us to tell them that’s not okay.
The Burger King example may be an extreme, but it is still representative of modern day competition. We shouldn’t have to be debating the relationship between a killer clown and a fast food mascot because Burger King feels it could help out its competitor. I do understand that Hollywood can be flooded with product placement, and that’s not inherently bad, but when it leads to censoring a movie because it’s featuring a clown, it might be time to take a step back.

Personally, I loved “It.” The movie left me feeling a lot as I walked out of the theater. Excitement. Happiness. Fear. I was taken on a roller coaster of emotions, but that ride definitely did not make a stop at a McDonald’s drive-thru, though I can’t wait to see what Burger King will say about the upcoming sequel.