Behind the scenes: Homecoming 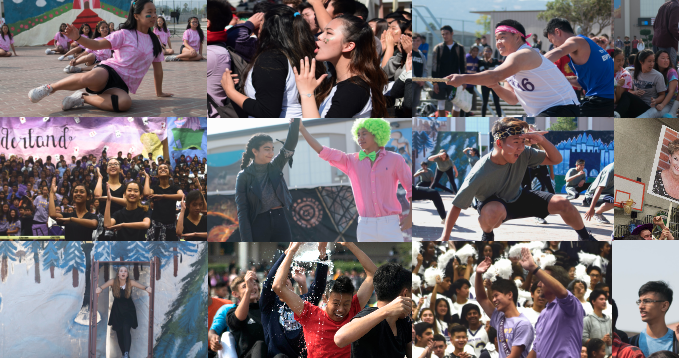 Every weekend over the summer.

That’s how long class officers spent brainstorming ideas, making props and writing the script for the Homecoming skits — and how long dance coaches like juniors Shirley Qi and Chloe Wong devoted to planning and choreographing the boys, girls and co-ed Homecoming skits.

“We had to first decide the music, and picking [and editing] the music for the dances is pretty difficult because it should match the theme but also be pretty upbeat,” Qi said. “We also had to make a choreography that’s easy enough for the entire class to learn but still interesting for the audience to watch, which is [also] pretty difficult.”

In addition to creating the dance, the class coaches work closely with the leadership team and their respective class advisors to get the music and dance moves approved. And once school started, it wasn’t long before coaches began leading at least one weekly practice for each dance during lunch and, occasionally, after school.

“My favorite part is probably the actual teaching process because it’s really exciting to see people with almost no dance experience [performing] the dances really well,” Qi said. “Just seeing everyone get the moves together is really exciting.”

Qi believes the process for selecting music posed considerable difficulty, whether it be overlaps between classes or the extensive amount of time dedicated to creating and coaching the dance. However, she recognizes the importance of having dedicated, skilled coaches for a class, and she enjoyed being able to coach her peers and looks forward to the final product on Homecoming day.

“[Before], with quad decs, … only a few people could be a part of making the actual float,” Qi said. “But for skits, a lot of people can be involved in the voice, the acting or the dancing, so people who are good at different things can join and help.”

Two weeks ago, students received an email regarding Homecoming week, but little did they know that class officers has been preparing for the rally since June. At 10 a.m. on Friday, Oct. 14, the bell rang and most MVHS students walked, or in some cases, ran towards the gym as the rally soon began. The Homecoming rally filled the gym with energy, but behind all of that energy came hours of work on behalf of the leadership class.

For months, MVHS ASB plans for these 30 minutes. ASB President senior Juliane Tsai describes how as homecoming drew closer, they began to spend more and more time prepping for the rally.

“For the props and for rehearsing, class officers need to start in the summer,” ASB Vice president Santosh Sivakumar said. “As the school year starts, we start tackling the stuff that affects more of the students on campus like dress up days and food drives.”

When MVHS ASB leaders were elected last April, they had a conversation about what they’d like to change. ASB President Julianne Tsai describes how class involvement was one of the major differences.

“Some people … don’t like dancing and they don’t like acting,” Tsai said. “You can get involved in quad decs, but some people don’t like art. We’re just thinking of more ways to involve people.”

That’s when they came up with the idea of the homecoming games. Everyday at lunch, there was a game in the rally court where each class competed. From balloon pop to tug of war, there were a variety of ways for the class to become more involved.

“If I wasn’t in leadership and I didn’t know what was going on, I would love to get involved in a quick game,” Tsai said. “There’s less commitment and it’s just a spur of the moment thing and a lot of people like that.”

After being in the leadership class for most of high school, Tsai, Sivakumar, senior Sara Nordby, senior Andrea Chang, senior Samantha Millar and senior Stacy Park are now MVHS ASB Officers. Tsai describes how there is a significant difference between ASB and class officers in that ASB plans for all four classes, whereas class officers plan for their respective class.

“For ASB, [we] have a more bird’s-eye view of homecoming as [a whole],” Tsai said. “It’s more school wide than class officers, [who] are in charge of the really huge skit and the dance and getting their class members involved.”

ASB has been working on different drafts of homecoming for months. They completed a draft, reviewed it with their advisors and then shared it with the leadership class.The draft consists of plans for the spirit days, the newly-implemented homecoming games and the rally itself.

“For ASB, what we do is we just plan in the big picture,” Tsai said. “[Class officers] work with their [class] and for us we’re just thinking school-wide, what would be the best thing to implement for homecoming.”

Although ASB, class officers and student volunteers work almost [three] hours every day to ensure a smooth, entertaining and — in the spirit of competition — victorious Homecoming week, assistant principal and Leadership advisor Mike White works behind the scenes, beginning the previous school year, providing students with the necessary tools, organization and support.

“I start working with the students when they pick their themes,” White said. “My big role after that is to organize supplies. I order everything [from] t-shirts [to] rally supplies. I book the DJ, I get the confetti. I make sure they have everything they need to make it happen.”

To streamline the Homecoming process, White collaborates directly with Leadership co-advisor Jenna Smith, school financial specialist Calvin Wong and office secretary Debbie Mandac. By communicating with students in leadership through email and their respective class Facebook page and informing the rest of MVHS through Loopmail, White also makes sure to keep the rest of MVHS posted about upcoming events, schedule changes and volunteer opportunities.

“It’s a lot of fun, but it’s just a lot of details,” White said. “One year, the [dance] photographer didn’t show up, [even though] they were ordered. People get excited over those things because they don’t realize all this stuff that goes on behind, how long it takes to get things sometimes. It’s just … getting on top of timelines and making sure people are doing the jobs they need to do.”