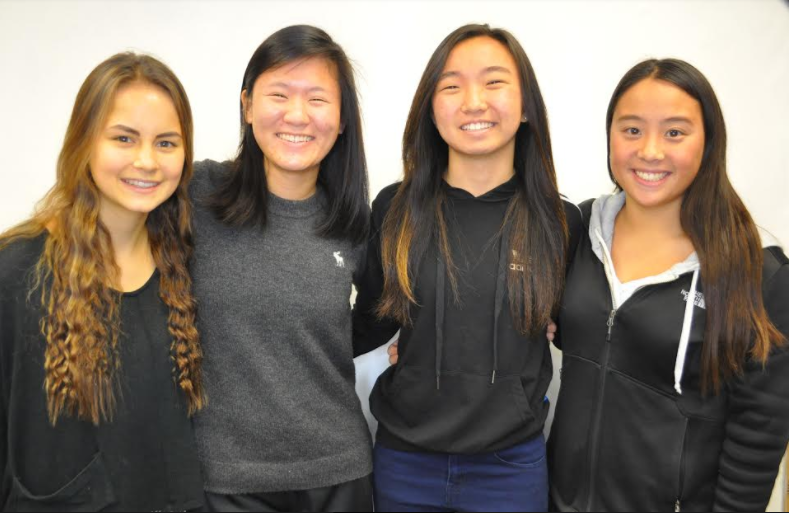 Maggie McCormick
fter struggling to fit their project into the education theme last year, MIT Launch members seniors Hannah Kan and Grace Luo and juniors Karina Wang and Iris Dong are back to make their dream of affordable hydroponic gardening a reality. Hydroponic gardening, the practice of growing plants in water instead of soil, falls perfectly within this year’s MIT Launch topic — environmental sustainability. Overpopulation on Earth is a major problem and causes many issues, such as lack of land for housing farming and the need for mass amounts of food.

Though it is such an important development, many people do not know what hydroponics is. Hydroponics is the study of growing plants in water without soil and has been around since the 10th and 11th centuries. It has evolved with society and has been revamped by scientists to accommodate those who are unable to access open land for farming. Hydroponics is environmentally sustainable because a hydroponic system uses only the water it holds, which contrasts the tons of water lost to the earth in soil farming. However, the main issue with hydroponics is that it’s not very accessible to the general public due to the high price and large size of the systems.

Kan’s group started small and worked with herbs last year to test their design and get an idea of how hydroponic gardening functions at a smaller scale. They plan on growing tomatoes and cabbages this year as their prototype develops and evolves with their work. Since this is the group’s second year working on the project, they were given money by MIT to work on a prototype and get a provisional patent.

For the group, hydroponic gardening is important because of it’s easy to maintain and it has the ability to provide people with a source of fresh, natural food grown right in their homes. Kan explained that produce from a classic soil farm takes up to 11 months to go from farm to grocery store, whereas the hydroponic system her group is working on is conveniently placed right in a consumer’s home. The group’s target audience is people living in small places like dorms or apartments.

The product at this stage is not meant to be a solution to world hunger, but rather for overcrowding. Wang explained that many people who lived in apartments or complexes without big yards to garden in are at a disadvantage to those who live in a more spacious home. The hydroponic system her group is developing is a way to help provide those people a way to get fresh food from their homes when they don’t have the soil to do it.

“[The product is] more for urban societies where the civilization lives close together,” Wang said. “For example, New York because [there are] a lot of apartments and not a lot of houses.”

The main question Wang’s group has to answer this year is how to make an affordable product that is easy to take care of, and then communicate the product to the public. For Kan, being on the design side is challenging, and there is a lot of work that goes into finding the perfect system that is easy to use, cheap to buy and self-sustaining.

“You have to figure out how to manipulate everything,” Kan said. “So that [the hydroponic system] is at it’s maximum output.”

Though there are challenges in creating a cheap and accessible hydroponic system, Kan is looking forward to solving them with her group.

“I personally love every single person that’s working on my team. They’re all extremely capable of what they’re doing,” Kan said. “It all just works out really well.”