“Sunny Side Up:” A Process 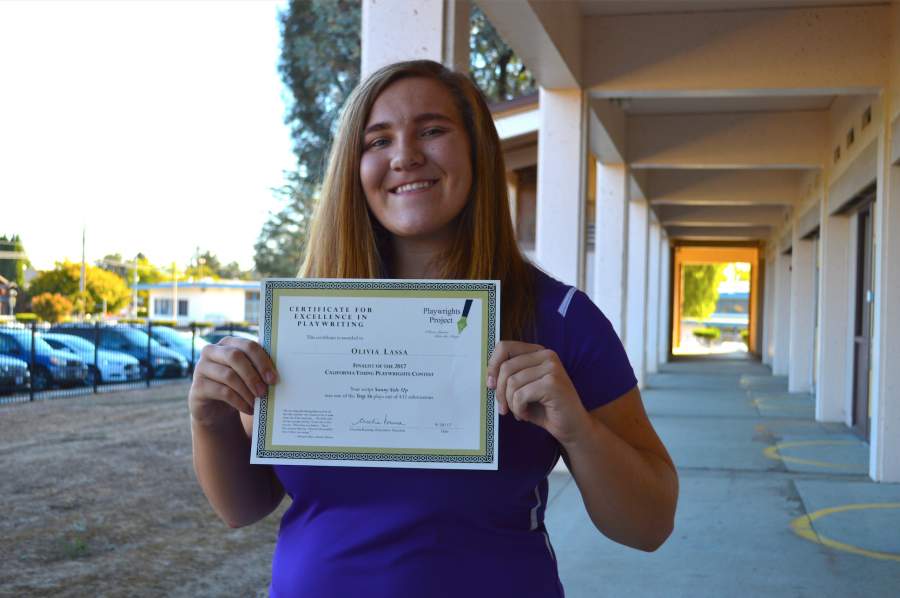 Senior Olivia Lassa holds up her certificate as a finalist in the California Young Playwrights Project. Lassa was one of 17 students recognized by the organization. Photo by Akshara Majjiga.

Akshara Majjiga
t was honestly just a whim. She had been working on her play for a while, finding things she wanted to change, gathering opinions from fellow classmates. She had thought this was a chance to test herself. If she didn’t win, at least she knew she had tried her best. It was also a chance for her, if she won, to travel somewhere outside of the Bay Area.

The next thing senior Olivia Lassa knew, she was flying down to San Diego, on September 29 and 30, sitting in a reception area, alongside 15 other people. She found herself taking photos with them, holding a certificate that labeled her as a finalist out of 432 submissions in the California Playwrights Project.

The California Young Playwrights Project is a competition in which people under the age of 19 can write and submit their own plays in hopes of having it performed in front of a live audience. Lassa says that she had only discovered this project after searching online for how to format her play. She saw a link about the contest and looked at the guidelines out of curiosity. Funnily enough, the day she discovered the competition was in fact that the day it was due.

“The deadline was actually the day I had accessed the web page, so I went and filled out the form, [attaching] my play; I sent it off and was told I would get a response in October,” Lassa said.

I think the biggest impact of this particular experience for me was the fact that I got to express myself creatively in not only a form I enjoy experiencing but that I could share that with others and share that experience and share that laughter.      Senior olivia lassaThe play that Lassa submitted was a piece she had been working on for a long time, called “Sunny Side Up.” The play is about about a grandfather and his granddaughter’s funny antics trying to escape SunnySide Nursing Home. The inspiration for her main character was her own grandfather.

“[I] just thought, my grandfather is so funny, and there’s just some things that he says and [he] does that I found so funny,” Lassa said. “And [I] like writing plays and I [thought] should write a play about him.”

Lassa says that her grandfather has never been in a nursing home, and that there are limited similarities, but overall the main character, Bob, was based off of her thinking about things her grandfather had said and trying to work them into dialogue.

While working on the play itself, Lassa perfected it bit by bit, getting opinions from other people, including her family.

“I would pester my mother for a long time to read my play and I would ask, ‘Hey does this sound like something someone would say or has my grasp of the English language just gone out the window?’” Lassa said. “I feel like the more you’re rereading and thinking about every specific line you think to yourself is that really how people talk? Or are my characters aliens who are trying to pose as humans?”

Through this process of trial and error, Lassa was able to fine tune her own brand of humor, one that placed her among the top young playwrights in the state. Although she appreciated the morale boost and the resume building opportunity she gained through winning, Lassa has always cared more about the actual playwriting itself. More than the award, playwriting allowed Lassa to express herself and spread positive emotions in a unique way.

“I think the biggest impact of this particular experience for me was the fact that I got to express myself creatively in not only a form I enjoy experiencing but that I could share that with others and share that experience and share that laughter,” Lassa said. “Because when it boils down to it, I love making people laugh.”

I think through allowing yourself laughter and like indulging in comedy, that’s something that I can hope to spread to people who read my plays and who interact with me on a daily basis.      Senior olivia lassaThis mission to spread laughter had Lassa concocting unusual situations — for instance, one that shows up in her play involves a rubber band ball, a tin of mustache wax, a picture of Dwayne the Rock Johnson, and a bag of pretzels. Lassa has learned to turn a variety of seemingly random objects into humorous elements in her show and to use dialogue to shape her story. As there is no place in a play to describe the scenery or characters’ emotions, a playwright has to be especially conscious of the words his or her character uses and what that shows the audience.

“Plays are based mostly on dialogue and what people are saying so there isn’t a lot of room to be like, ‘Oh, the hour was 6:15 P.M. Water glistened off this tree,’” Lassa said. “There is room to think about dialogue and how people are interacting with each other and how that in itself can be very comedic.”

As Lassa continues on to college and beyond, she doesn’t think playwriting will ever change. She sees a particular value in her skills as a comedic playwright here at MVHS, which she describes as a “pressure cooker,” and she believes laughter can be especially beneficial.

“I think at the end of the day its very important to be able to deal with stress and also to be able to not let it consume you,” Lassa said. “And I think through allowing yourself laughter and like indulging in comedy, that’s something that I can hope to spread to people who read my plays and who interact with me on a daily basis.”

Lassa has continued with her playwriting since being selected as a California Playwrights Project Finalist. She currently has four plays in the works, including another comedy for her Advanced Drama Honors class which will be performed by the International Thespian Society in December. Lassa summarizes her play in a sentence with her brand of comedy.

“I’ve written a play for that about two old ladies who accidentally end up robbing a laundromat,” Lassa said. “They make off with $5 in quarters and a pair of fuzzy socks.”