How Las Vegas changed us (or didn’t) 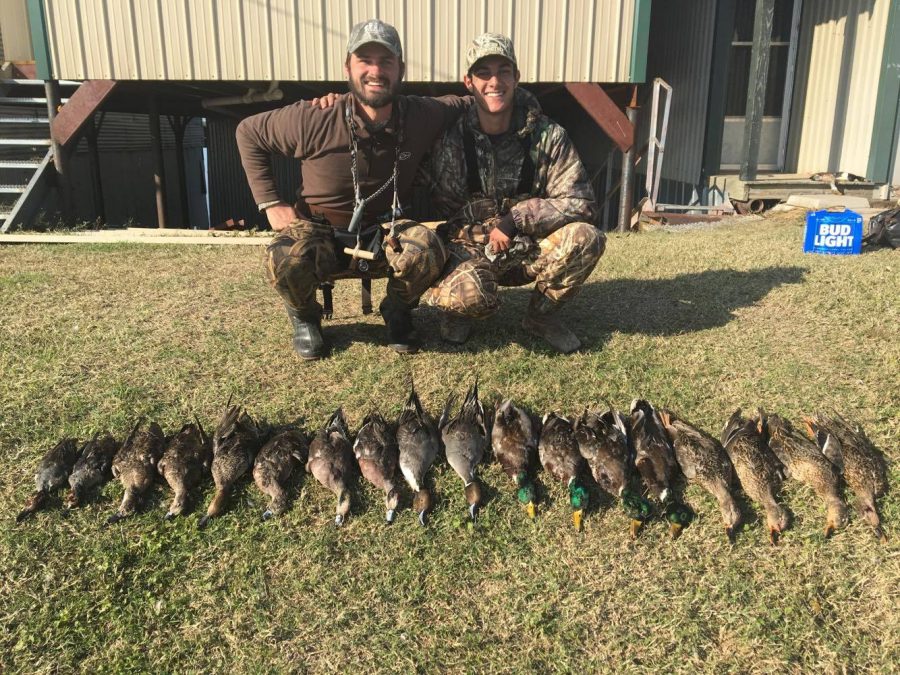 O'Neill poses with his uncle after a successful duck hunting trip in Ville Platte, Louisiana. The pair reached the maximum number of ducks to hunt: 18.

n Oct. 1, 2017, the deadliest mass shooting in the United States took place at the Mandalay Bay Resort and Casino in Las Vegas during a Route 91 country music festival, where 58 people died and 489 were injured. The shooter, Stephen Paddock, was in possession of 47 guns, 12 of which were equipped with bump stocks that essentially act as machine guns.

One MVHS student has relatives who lived close to the site of the Las Vegas shooting. Sophomore Fithe Demlew’s cousins were not far away from the shooting’s location, but fortunately, they were safe. Demlew believes that there should be some type of ban on guns after his experience with the Las Vegas shooting. But the shooting got Demlew and many others thinking about the topic of gun control legislation in the United States.

“I was just thinking ‘What happened to them? Are they okay?’ ” Demlew said. “I tried to call them, but my phone was dead. When I got into the car, my mom was already calling everyone she knows.”

O’Neill poses with his dog in Lafayette, Louisiana during a hunting trip. In Louisiana, outdoor activities like duck hunting are very common. Photo used with permission by Nick O’Neill.

Due to the increasingly alarming rates of mass shootings, many people are pushing for increased gun control. However, this idea clashes with the Second Amendment of the Constitution, a document created in 1787 to establish basic rights for citizens to bear arms, making it the subject of wide controversy and debate.

Senior Nick O’Neill often handles firearms at the gun range or while hunting. His interest in firearms started from videos about how to use them and the purpose behind them and gradually shifted towards the Second Amendment.

“I don’t think gun control should be as strict as people think [it should be] in Cupertino,” O’Neill said. “I think people are losing sight about what the Second Amendment was all about.”

O’Neill believes that at the end of the day, gun control wouldn’t solve as much problems as people think they would. He presumes that decreasing the number of guns would not necessarily decrease the amount of mass shootings. He stated that if a criminal wants to own a gun, they can and nothing will really stop them from getting one. As the National Rifle Association says, “guns don’t kill— people do.”

States which require thorough background checks and limitation of firearms sold have fewer deaths by shooting according to research conducted. In addition, according to The Atlantic, if the number of guns in an American household is reduced by 10 percent, there would be a three percent decline in the amount of homicides.

“It’s almost like we are getting desensitized to it, and I think that’s getting dangerous for us as a society,” Hajjarian said.Biology teacher Pooya Hajjarian is one of those people who supports more restrictions and limitations on the availability of firearms. Although he supports the Second Amendment, he believes that there should be restrictions set for buying guns which some states have, like having a screening process or background check. For him, the idea of gun control does not necessarily violate people’s natural rights, but instead limits the availability of them for national security.

As stated by O’Neill, the purpose of the Second Amendment is for the people to protect themselves when the government no longer protects their own rights due to corruption.

“We need the Second Amendment to protect ourselves from the government,” O’Neill said. “If we don’t have guns to keep our government, who want to control us, then how are we going to stop them at all.”

O’Neill poses with his uncle after a successful duck hunting trip in Ville Platte, Louisiana. The pair reached the maximum number of ducks to hunt: 18. Photo used with permission of Nick O’Neill.

O’Neill compared gun control to Hitler’s Nazi regime, saying that when totalitarianism takes over, certain measurements are taken so citizens will not overthrow the government.

“Generally speaking, I do think that a lot of people who are against wanting gun control, they see it as we want to take everyone’s guns away and I don’t think that’s the case. Like we want people to bear arms if that’s what they want to do, that’s fine,” Hajjarian said. “I just don’t think it should be super easy.”

Demlew, who had a personal connection with the event, found the shooting quite jarring. He says that even if his cousins weren’t at the shooting, his opinions about gun control would not change due to the severity of the issue.

“It was really, really sad that a person could do something like that to other people,” Demlew said. “I was just thinking, maybe guns should just be banned because this is getting out of hand. But you also have the amendments and stuff, so it’s a really complicated situation.”

In response to the shooting, Hajjarian reflects on his own emotions regarding the recurrence of mass shootings happening in the United States. In this year alone, there have been 273 mass shootings.

During his time in Lafayette, Louisiana O’Neill practice shooting skeet. Skeet is a shooting sport which involves a clay target thrown into the air to simulate a flying bird and also to practice aim. Photo used with permission of Nick O’Neill.

Although O’Neill does not fully support gun control, he had a similar response in reaction to the shooting as Hajjarian: sadness. He agrees that there are limits that should be taken into consideration. For him, his use of firearms does not jeopardize the safety of others.

“I first heard about it in the morning and obviously it’s an American city, or anywhere I would be very sad and obviously, I am very heartbroken about the whole situation that took place and I wish it didn’t [happen],” O’Neill said.

After the shooting, MVHS held a moment of silence to honor the victims of the shooting. Still, Hajjarian feels that while the respectful demonstration was important, it’s not enough. He believes that ultimately, having a moment of silence is great but does not affect the country’s security, and holds the people in power responsible for not taking any action.

As a teacher, Hajjarian feels like MVHS should implement some procedures on how to react when hearing gunshots on campus.

O’Neill is pictured, during eighth grade, on a farm shooting an AR-15 in Ville Platte. He first became interested in the use of firearms during sixth grade. Photo used with permission of Nick O’Neill.

“Its got me thinking that as a teacher, if I’m in my classroom and I hear gunshots, what am I going to do?” Hajjarian said.

The argument of gun control is widely debated across the country as shootings are becoming progressively common. There are many aspects about the problem which conflicts with national security and the people’s basic rights.