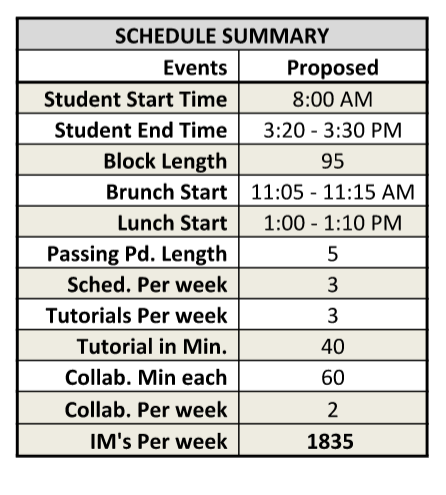 On June 22, students received an email and a letter from principal April Scott announcing a new bell schedule for the 2018-19 school year. The new 2018 schedule was proposed and sent out in an email to teachers on Sept. 25. It starts school no earlier than 8 a.m. and includes options for a week with either two or four block days.

According to assistant principal Andrew Goldenkranz, this new change was primarily driven by evidence regarding the relationship between student performance and start times not only on a national level, but on a local level as well that showed that a later start time would increase student performance in class.

“We want to organize the school around what’s best for the students’ success, and student success is academic but it’s also their health and their happiness and all of their social and emotional success as well,” Goldenkranz said. “That’s enough of a drive [to change the bell schedule], that’s the most important thing, and we need to be better at organizing how we structure the school around what students need.”

In addition to ensuring student wellness and success, math teacher Jon Stark explains the other motivations behind the new schedule change.

“The other goal is to get more commonality across the district, we have five different schedules for five different sites and it makes things awkward, for say, teachers who teach four periods of Japanese here and one period at Cupertino,” Stark said. “It’s very hard to share a teacher across sites if the schedules don’t match because the bell schedules may have conflicts and you have to be at two places at once.”

Junior Sunyoung Park, who gets an average of an hour of sleep per night, agrees that a later start time would help her to get more sleep.

“I doze out in class all the time because I’m so tired,” Park said. “I feel like if I had more time to sleep I’d be more awake by the time I’m at school and more prepared to learn effectively.”

This local evidence, paired with recommendations by the American Public Health Association and the American Psychological Association (APA) to start school at 8:30 a.m. or 9:00 a.m., impacted the district’s decision to change the bell schedule in the first place. However, MVHS was not able to accommodate the APA’s recommendation in the new schedule, primarily due to concerns over conflicts with after-school activities.

Goldenkranz says that while a later start would directly benefit student success, it would also pose a new challenge of navigating traffic during rush hour.

Not only would the later start impact traffic, it would also move the dismissal time later and potentially impact extracurricular activities and the amount of homework each student gets. To overcome this challenge, the MVHS administration would have to collaborate with schools like Lincoln Elementary, Kennedy Middle School and De Anza College that have similar start times to mitigate traffic in the neighborhood.

The later start time of 8 a.m. was based on input from the Wellness Taskforce, whose data originated from a survey of 2,097 students that indicated that 82% of students believed that a later start time would benefit their sleep schedules.

A later start time also means that students would be dismissed from school at about 3:20 or 3:30 p.m., which would potentially cause conflicts with extracurricular activities.

“I lowkey hate both of these schedules because we’re getting out of school later and because [of] extracurriculars plus homework,” sophomore Nicholas Jiang said. “That’s more burden on me just so I will have to wake up later, so that kind of sucks.”

Park agrees, explaining that later dismissal time will conflict with activities she plan on attending.

“That extends my entire day, I’m already sleeping late because I don’t have enough time after school to get my work done,” Park said. “Extending [the school day] by 30 minutes is just going to make me sleep that 30 minutes later.”

Sophomore Katherine Chen agreed with Park, saying that her swim meets would cut into valuable class time, even more so because the meeting times would not change.

On the contrary, Goldenkranz ultimately believes that the new bell schedule is good for encouraging students’ success at MVHS.

“It’s gonna be a challenge, again, logistically, there’s gonna be some getting used to it,” Goldenkranz said. “But on balance, I am confident that this is going to be good for kids.”

Staff and students look at the 2018 new schedule with different perspectives. Some do not agree with the change, while others support the change. Stark addresses this and regards this as one of the main challenges for a schedule change.

“It’s always an issue, getting everybody satisfied, so the Union has a principal to do this. There are people who notice things about the proposal. […] What would happen to traffic? What will the impact be on afterschool sports if we end later in the day?” Stark said. “Lots of little details like that are concerned.”

However, Stark believes that people can overcome this challenge simply through time even though the initial change will be difficult to adapt to.

“Generally, I think it will all be sorted out, and after people have been on the schedule for a year or two, [it will] be okay,” Stark said. “But the transition will always be awkward and change is painful to go through.”