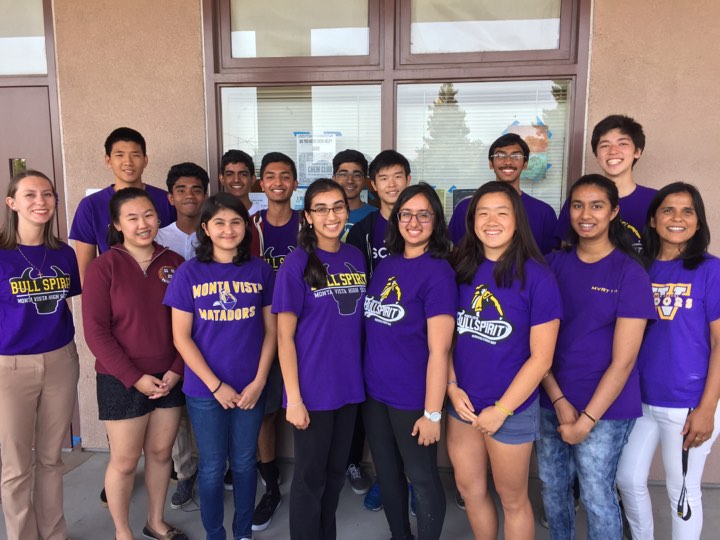 student with cerebral palsy wanders through the crowded halls during a passing period, attempting to navigate his way through without bumping into anyone. He struggles to stay upright and safe as students push past him in order to get to their classes. Finally, someone knocks him aside, putting him into a perilous situation. This is the situation that MVHS’s Lemelson-MIT (LMIT) team played out in front of the Cupertino City Council, and one that they are hoping to fix with a jacket and $10,000.

On Tuesday, Sept. 5, science teachers Kavita Gupta and Emily Fitzgerald presented in front of the Cupertino City Council, along with 14 MVHS students that applied for a $10,000 grant for a motion-sensing jacket. The money would help them in developing and improving the jacket that would greatly assist the elderly and those with ambulatory difficulties.

Senior Bill Cheng, who suffers from cerebral palsy, is one of those with difficulties in movement that many take for granted.

“If Bill gets bumped into by someone, he can fall down very easily, he doesn’t have very good balance,” Fitzgerald said. “He can get hurt, so the idea behind the jacket gives you vision from behind, so he can tell if someone is approaching him.”

In order to assist people with similar disabilities, the team came up with an invention that eventually became one of the finalists in the Lemelson-MIT competition and presented their idea to the city council in the hopes of receiving $10,000 in funding, as team leader and senior Anika Ramachandran explains.
“We really hope to get as much community support as possible because the more the community is behind it, the more impactful the product becomes, and the more people want to see it come to a reality, and support that,” Ramachandran said. “So that was pretty much the goal when we go to the city council, to inform them of what we’re doing and trying to get some support as well.”
According to design and engineering leader and senior Samin Ullah, the details of creating this prototype are complicated. As a 3-D designer, Ullah is in charge of making sure that the motion sensor and the control panels can fit into the jacket comfortably.

During the process of planning and researching, the LMIT team came up with an estimated budget plan that covers not only the cost of creating the prototype, but also the cost of shipping and promotion. For example, $200 have been allocated to printing brochures, and another $100 is set aside for non-wearable promotional materials.

The team takes marketing, setting up and prototyping into consideration as the three main categories that will potentially cost the most money. They buy their own parts and tools, as well as the software they use to program the jacket.

The team hopes to eventually expand on this idea and reach out to potential markets and retailers, as well as the Cupertino community. They plan on making the project more well known in order to garner support. The importance of the prototype to those with mobile disabilities is something that the team emphasized throughout their presentation.

“This would be super impactful because there’s more than seven percent of the world that faces such ambulatory difficulty,”  Ramachandran said. “And it would have [an] impact on people in our community.”

While making an impact on the community is MVHS LMIT’s main goal, their status as finalists in the competition affects the team members emotionally as well, giving them hopes to publicize this product.

“I hope that in a couple of years, it could actually be a real product that we could use,” Ullah said.

The emotional impact of the creation process extends past the students, too. The students’ initiative provided inspiration and motivation for the advisors to work with them further.

“This is one of the [most fun, hardworking and insightful] teams to work with,” Gupta said. “It’s been very rewarding, I hope we get the grant so I get to work with these wonderful kids more.”

“This is one of the [most fun, hardworking and insightful] teams to work with. It’s been very rewarding, I hope we get the grant so I get to work with these wonderful kids more.”-Science teacher Kavita GuptaRamachandran also reflected on how being involved this project and presenting it to the city council has affected her.

“Often times [at MVHS], we get so focused on doing the best for something,”  Ramachandran said. “This is more of a team bonding, which is, you want to make the impact, that’s the goal, it’s not to win anything or do anything else, but really make an impact somewhere there in the world.”

To see the full clip of the MVHS LMIT presentation at the Cupertino City Council, watch below: