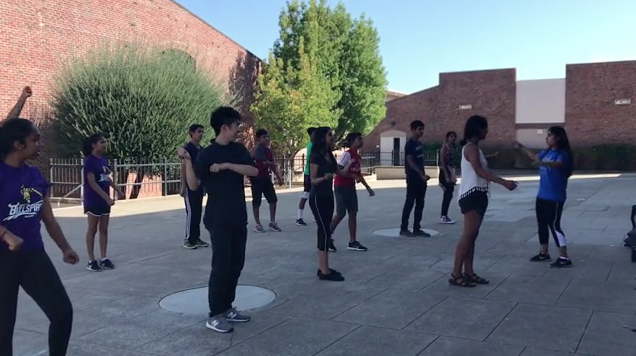 His first Bollywood performance was at Google in his freshman year, with almost 3,000 people gathered for Diwali, the Indian festival of lights. Looking back, he’s sure that he had made many mistakes, but he kept dancing. Now, four years later, senior Dhruv Parikh is co-president of MV Andaaz, a bollywood and hip-hop dance club on campus.

Since Parikh joined the team, there have been many new changes, starting with the name of the team. In his freshmen year, it was called “MV Bollywood,” but the former captains decided to change the name as well as the style of dance from not only bollywood but hip-hop as well. They also hosted their own show, Tashaan, where they invited teams from many different schools to perform at MVHS.

Parikh joined the team because one of his family friends was on the team at the time and had shown him videos of MV Andaaz performing.

“My impression before [I joined] was that it was for mostly girls and only people who can dance really well,” Parikh said. “But after I joined, I realized that dance can be taught to anyone. It’s just based on how willing you are to learn to make it look really clean and […] graceful.”

When Parikh first started his freshman year, he had barely danced before. Three years later, he is helping run the first practice of the year.

“They decided to implement those changes […] because ‘MV Bollywood’ was pretty static,” Parikh said. “It was just a group of friends, but they thought they’d make it an official team by calling it ‘MV Andaaz’ because now we actually do stunts and have more official practices, compared to when they created MVHS Bollywood seven to eight years ago.”

Parikh agrees, describing how the hardest part of being a captain is the time commitment. He explains that the choreography the audience sees on the stage equates to hours of endless work on behalf of the captains and officers perfecting each person’s position and technique.

“[It] is numerous hours of creating decent [choreography], scrapping it completely, changing it completely, making it perfect after that, planning formations — how everyone can get equal amount of time,” Parikh said.

As a captain of the team, not only do they have to figure out what each of the people on the team are doing at every point in the performance, but also a myriad of other tasks.

Despite the immense responsibility, however, Vats continues being a captain to the team and, looking back, is grateful for the perspective that she gained as a result.

“I got to be in control and I got to see everyone grow as dancers. I feel like I wouldn’t have gotten that perspective as just a member,” Vats said. “Now that I’m a captain, I actually watch people dance and I can help them improve and tell them what to do better.”