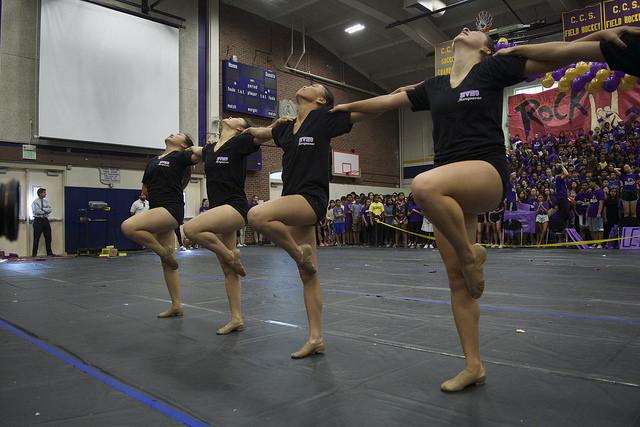 The Marquesas are in full swing, even though it’s only a month into the school year. They’ve already performed at their first football game and rally of the year. Along with football games, new competition routines are also being choreographed. And behind it all are their captains, officers and a new coach — P.E. teacher Dasha Plaza.

As a sophomore, officer Jennifer Huang is in an unusual position since most of the dancers on the team are older than her. She knows that some of those dancers have tried out for officer positions multiple times, and she says they deserve it as well. But in a way, she thinks that her position as an underclassmen officer can serve as an inspiration for younger students on the team.

“I feel bad at some times,” Huang said. “But I feel like it kind of also allows the younger members [to know that] if they’re good enough that you can still be like a part of the leadership team, you can still be a leader, even if you’re not the oldest.”

“I want us to be more positive … and think ‘how can we improve,’ rather than thinking ‘oh well we’re here and we can’t really do anything,’” Huang said.

Personally, she admits that she’s not quite acclimated to her new leadership position. Sometimes when the team becomes noisy during water breaks, she finds it difficult to get the team’s attention. But even so she sums up her feelings for the next year with the word “excited,” even though she knows it’s cliché.

Officer Caitlin Malone and Captains Kirstin Li and Tiffany Liu are all seniors who have been on the team since their freshman year. As officers last year, Liu and Malone said the year of experience leading the team last year has made this year feel a bit less daunting and they’re excited to take on their last year on the team. Listen below to hear what Liu and Malone they’re looking forward to during the next year.

Even though this may be her first year coaching the Marquesas, P.E. teacher Dasha Plaza is no stranger to the team. She first started teaching master classes for the team two years ago and worked with the team on Mondays last year.

Plaza also directs a performing company at a local studio, so she’s experienced the distinction between competitive high school dance and a convention style competition, which is what private studios compete in. She says that the technical aspect of a routine and the cleanliness with which is performed is typically the priority in high school dance teams, while private studios have more stylistic dances.

“We don’t have as much artistry involved but the raw, emotional aspect and connection to the audience, I feel, is lacking in the high school dance, especially when it comes down to the group routines,” Plaza said.

Plaza hopes to merge the two by adding stylistic flair and a more contemporary style in the Marquesas’ routines. But her other long-term goal is to give anyone who loves dance to have the chance to be on the team.

“I would like to have an opportunity for as many dancers on campus to be part of this high school journey,” Plaza said. “And I know a lot of dancers who dance for outside studios have scheduling conflicts and are busy, just life in general, but I would like to make it work for those who are interested with the passion for dance and I want to see more people at the auditions.”