Philosophy club tackles the question: What is the meaning of life? 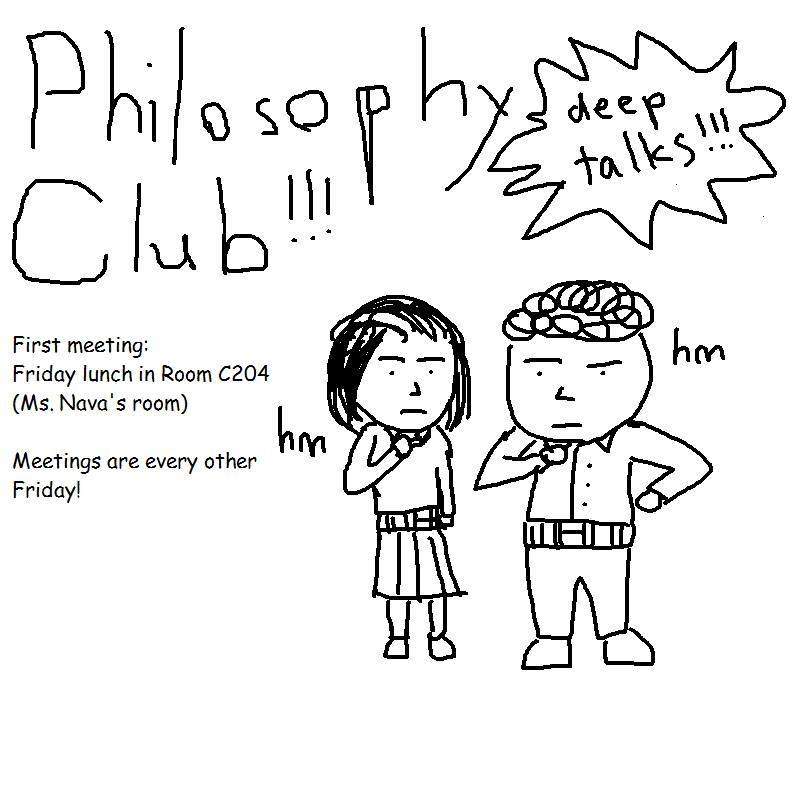 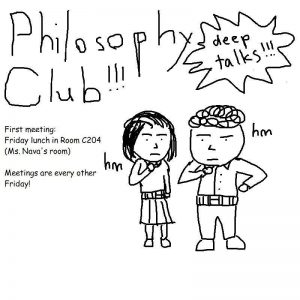 Philosophy club’s promotional photo, rendered by senior and President Nicholas Chen. Officers made this their Facebook profile picture to invite new members to their first meeting. Photo used with permission of Nicholas Chen

What is the meaning of life? Are certain ethical standards universal? How should an ideal society function? Is Comic Sans objectively ugly? Come to Philosophy Club and discuss!

Such string of thoughtful questions attracted a cluster of thinkers to Philosophy club’s first meeting of the year. There was no busy rush of eager freshmen nor monotonous slides on club logistics. Instead, individual students quietly trickled into the warm glow of C204, as senior and President Nicholas Chen cut straight to the topic of existentialism.

This year, Chen serves as the new president of Philosophy club. Its founders — MVHS alumni Sindura Sriram, Shreevika Mitra and Zayan Musa — established a space for enrichment in philosophy and thought-provoking discourse, fueling heated discussions between students for an entire lunch. Chen was once one of the contributors to such debates. Upon their graduation last year, however, Chen is now the only returning officer and curriculum developer.

To ease members’ transition into the abstract world of philosophy, Chen opened up the meeting with existentialism: a rare field of philosophy that ties back to daily life. Flipping through pitch black slides with words lined in white, Chen first defines what drives our actions in life as: a will to _______. People may be driven by a will to pleasure, a hedonistic attitude of maximizing pleasure and minimizing pain. (Under that umbrella, they only act in cases that evoke pleasure.) People also strive toward a will to meaning. Chen gave the example of Holocaust victims, who found meaning in life through their goal of reuniting with their families.

He then posed the question: what if life is meaningless?

“Camus’ answer was that life is absurd and we should just embrace that absurdity… You shouldn’t look for meaning in life. You can create temporary meaning in life, to provide yourself solace,” Chen said. “But you should always have in the back of your mind the knowledge that the meaning you created is largely meaningless…It’s absurd. Camus would tell you to embrace that absurdism.”

After touching on this will to the absurd — an extension of existentialism — Chen ended his lecture for the six pensive members to spill their views. He began with the question: Can the will to meaning drive people to commit bad things?

Immediately, one member brought up dictators.

Chen asked: What motivates a dictator?

The member said that it depends. A good amount of selfishness. The loss of power.

To inject a new perspective, Chen then cited the law of diminishing returns, using apples as utils.

“If I gave you one apple, you’ll be pretty happy. If I gave you ten, hundred apples, you won’t know what to do with them,” Chen said. “You’ll eat one of them, probably. Maybe eat a second. By the third, you’re just eating them because you have a lot of them. By the fourth, if you were eating it, you’ll probably be losing satisfaction rather than gaining it.”

With a hundred apples under their belts, one apple now has little significance. Beyond a certain level of comfort, the level of appreciation diminishes. Chen questioned: Then why do dictators continue to dictate if they can’t really become happy from gaining more power?

The member replied: They’re trying to maintain that happiness. They keep searching for that one apple.

The conversation continued in its free-flowing manner, facilitated by Chen on his stool near the whiteboard. As new members strolled toward their seat of choice, settled members filled the room with an inquisitive air. The discussion morphed into different topics, from the idea of power to the definition of happiness. Senior and officer Victoria Xiao referred to happiness as a fleeting moment, making the pursuit of happiness a foolish goal. Senior Prachi Gupta still recalls a memorable thought experiment: If humans were replaced by robots in their jobs, what would it mean to live in that type of society?

“I think that was really interesting to think about as a student at MVHS, where working hard is so greatly emphasized that it’s hard for people to imagine their lives without mounds of work,” Gupta said.

As members juggled around different ideas, Chen substantiated many with philosophical frameworks and historical instances, while continually posing various, provoking questions under existentialism. Though the final bell dismissed the meeting, Philosophy club’s importance imprinted in the minds of its members.

“I think in Monta Vista, it’s needed for people to feel comfortable expressing their opinions without the judgment of a classroom or online,” Xiao said. “It gives students to discuss topics that may have not come up in classrooms.”

While defending Marx’s philosophical framework, scrutinizing Nietzsche’s existentialism and deliberating over Freud’s psychoanalysis, Chen plans to expand and impart his knowledge on philosophy through their bi-monthly meetings. Including what philosophy really means.

“[Philosophy] is about examining the world around you, whether that means what you wake up in the mornings for, what you do things for, whether or not transcendental truth can be found. It’s the question of what is the destination of history. Is there ever going to be a point in history where development stops and human society just have reached perfection?” Chen said. “All of these questions can be put underneath the umbrella statement of examining the world around you with a critical lens.”