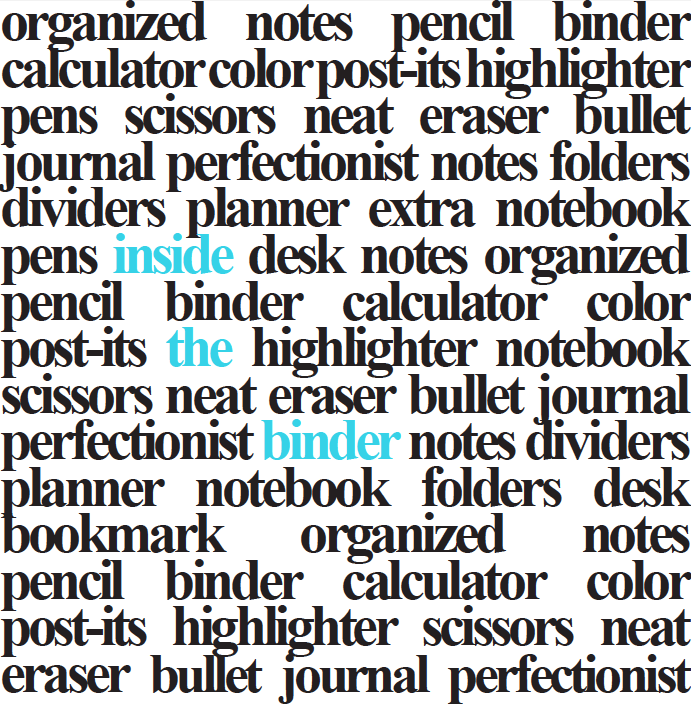 Jennie Chen
s art teacher Brian Chow scrolls through pictures of bullet journals for the first time, his brow furrows in concentration while he zooms in to see the details of the intricate design. He stops to focus on one particular bullet journal spread, which features a color-coded plan for an entire week, tracking everything from water intake to purchases of kitty litter.

“They’d be a really good designer at some point, like a visual designer, because they’re certainly concerned with how things are looking,” Chow said.

Chow sees bullet journals as succinct, clear and laid out to the point where they can feel “designed,” — a feat he considers opposite of illegible, jumbled scrawling on pieces of paper. But while he recognizes that there are more extravagant ways to construct a to-do list, Chow prefers to stick with what he feels is a more practical method of organization.

Chow describes his classroom as organized enough to maintain an ease of workflow, so that students can quickly access materials to avoid wasting class time. Chow’s own daily to-do list is a minimalist notepad with a template for the date, task and time a task should be accomplished.

On the other hand, sophomore Ashley Liu’s current method of notetaking and organization was inspired by the study blog community. The study blog community, coined “studyblr,” are usually Tumblr or Instagram accounts dedicated to posting about academics, whether it be advice on staying motivated or master posts with links to helpful websites. The focal point of these blogs, however, is the color-coding, neatness, organization and overall pleasing aesthetics of their notes and bullet journals. Through these posts, bloggers hope to show off their work while also instilling a sense of motivation towards academics and good habits.

“Chaos means things are just everywhere and not super organized, and just kind of go with the flow. Because that’s how life is.”

After scrolling through some Instagram posts the summer before her freshman year, Liu decided to start taking notes in a more organized fashion. Although it felt strange at first, she quickly became used to her new style.

Though she has received many compliments about her aesthetically pleasing notes, she has also encountered some that see her notes as “extra.” However, she believes that spending additional time to make her notes useful isn’t considered “extra.”

Compared to more aesthetically-focused notetakers like Liu, sophomore Audrey Lai feels she is more practical in her note-taking, by remembering that the point of her notes is to make sure she can understand the content and study the material without stressing out about finding the material.

“I like to color code things because not only does it keep [my notes] organized, but it also looks nice,” Lai said. “It’s just calming sometimes to look at those things and relax while you’re working or stressed out about studying.”

Although Lai knows of the studyblr community, she maintains that her notes are different, because while bloggers’ notes cater more to the enjoyment of their followers, hers are organized in a format that she knows best, not for other people to look at. Accordingly, she likes to maintain a clean workspace by placing all her pens in a special container and folders and binders in a designated drawer.

“I’ve always enjoyed organizing things — when I was little I’d clean my room for fun,” Lai said. “And it’s actually really relaxing [and fun] to organize things and put things away when you’re stressed because it’s not something you really have to think about.”

For Chow, excessive organization and bullet journaling feels like a waste of time. He feels that the time and energy necessary to make notes visually pleasing can be better spent doing other work, like playing sports and fulfilling his bucket list activities.

“I can do [a lot] to make [something] look nicer. And that might be kinda fun, right?” Chow said. “But then I have to go look at ‘Well, how much time do I have? Do I want to spend my energy beautifying that piece or do I want to spend my time doing something else?’”

Still, Liu feels that she focuses equally on aesthetics and practicality. There’s an effort to make her notes look nice, but she also strives to get down the main ideas of the lecture instead of solely focusing on beautifying her work. She advises students aspiring to improve the neatness of their work to look for on Youtube or Instagram, because the plethora of tips would cater to a wide variety of people.

Chow likens students’ different note-taking styles to different learning styles. He surmises that there are people on both sides of the spectrum: ones who like everything to be a certain way, and others who can function just fine in a more chaotic environment.

“Chaos means things are just everywhere and not super organized, and just kind of go with the flow. Because that’s how life is. It changes on a dime, and all things can be planned out. But what do you do when it’s not planned out anymore and it changes?” Chow said. “You might be in [that situation] and function just fine, but at some point, things just have to be a certain way. So for some people maybe it’s their notes.”