The impact of language: How languages can change lives 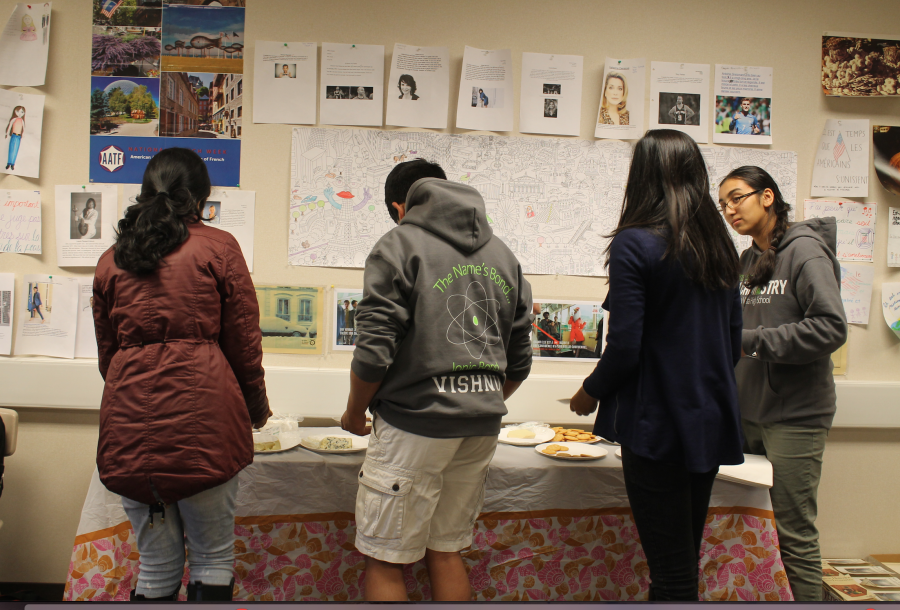 Ramachandran and other emebrs of the French Honor Society sample traditional food while socializing. Photo by Amanda Chen

Senior Anika Ramachandran proudly stands in the midst of her hard work, looking around at the bustling chaos of MVHS’s Culture Night. The rally court is decked in the colors of different countries, from China to France. On one side, students sample food from a myriad of cultures. On another, students exclaim as they play games such as cultural trivia Jeopardy. On a platform, a dazzling display of cultural dances take place, from classical Indian dancing to  K-pop choreography. On a temporary catwalk, students strut down the runway adorned in clothing from every corner of the world. Ramachandran beams at the festival, the final product of countless hours of planning and coordination. Now, this school year, she can’t wait to organize Culture Night again. Along with Culture night, Ramachandran will be shouldering many responsibilities this year as president of MVHS’s French Honor Society (FHS) .

Ramachandran has many hopes for FHS this school year.  She is extremely passionate about the central goal that FHS strives to accomplish: to spread cultural awareness and promote the exchange of culture.

“Our main goal is to share our love for the French language and the culture. The goal is to explore more than you can in the classroom, by trying to create those experiences so you can feel that connection to the culture,” Ramachandran said. “For example, for the fȇte du fromage [the cheese festival], in class, we learn about the importance of cheese, but you don’t get to taste it or experience it. That’s what [FHS] provides. That extra connection with the culture.”

Ramachandran emphasizes how being involved in FHS has helped increase her political and economical awareness. The club often engages in debates and speeches on French events and news, which Ramachandran believes adds a new layer of significance to learning French.

“I really love the culture. The language is beautiful but the culture is very similar, but in certain ways very different to the culture here in the U.S.,” Ramachandran said. “I feel just learning about [global news], especially at this time, when there’s so much going on in France related to global events, it’s really helped me open my eyes.”

Ramachandran explains that when she first began learning French, she struggled with learning the language. Her accent and pronunciation weren’t perfect, but Ramachandran committed fully to learning the language, putting in extra work. She was enthralled when she saw FHS members speaking fluently in French. It made her realize that her knowledge of French could be applied to much more than the classroom.

“I saw the [members of the] French Honor Society, who were doing all these debates, they were doing all these really fun activities,” Ramachandran said. “They were learning more about the culture. I decided to become an officer last year. Then, with all the effort, it just seemed right to expand the club and take responsibility.”

Ramachandran explains that despite all the benefits of the French Honor Society, she appreciates the cultural aspects the most. She believes that the unique opportunity to spread cultural harmony in her society is incredible. Culture Night was one prime example of many different cultures coexisting and merging with one another.

“You could see all the cultures come together, which is something that you won’t always see. That’s something we’re planning to bring back this year as well, hoping that it will be bigger. We’re also trying to make the food free, because that would be great,” Ramachandran said. “The thing is that classrooms don’t always have the time to go that in depth with culture, but [in FHS] you can really push yourselves above and beyond.”