Hear it from the players: Girls volleyball wins first game 3-0 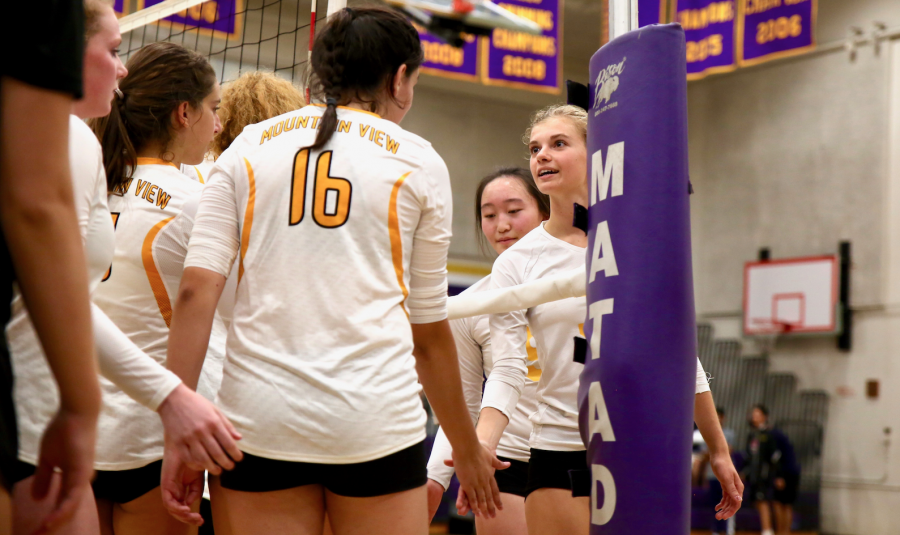 Roshan Fernandez
s the team came out onto the court for their first game of the season, the players appeared to be all smiles, but as they started to play, it became apparent that there were some slight nerves circulating throughout the court. Facing off against Mountain View HS on Aug. 24., each player seemed to feel both the pressure and the anticipation that came with the first set of the new season.

The team struggled early on, and after trailing nearly the entire set, coach Colin Anderson called a timeout with the Matadors down 20-23. There had been evidence of smooth, well-executed plays, but the results just weren’t showing the way the team had hoped. At least not yet.

And sure enough, the team put on quite a spectacle, moving the ball with more efficiency and communicating better for the remainder of the set. After a few long rallies, the Matadors ran out onto the court in one big group hug, celebrating the victory of their first set of the season by a score of 26-24.

With the first set complete, both teams had quickly learned that there was no room for error, since this game was a very even matchup. And when neither team showed complete dominance over the other, everything was on the line for the last few rallies in remaining two sets. And the Matadors showed focus and execution, pulling through to take both sets by scores of 25-20.

But despite their victory and 1-0 record, the team knows that there is still much work to be done and they have a long season ahead of them.

Scroll down to read what the players had to say following their 3-0 sweep over Mountain View HS.

Sophomore Anumita Alur on her new role on the varsity team:

“It was such a good feeling, like last year I got some playing time, but not as much as I do this year, so it just felt really nice to go out there and actually score points for my team.”

Junior Sarah Huang on the nerves towards the ends of the sets:

“To be honest, when we won the second set, I didn’t even know that we won so I was like ‘Oh, sweet.’ But yeah I try not to look at the score because if I do I know it will kind of affect [the way I play].”

Senior Alia Johnson on her role in the upcoming season as captain:

“[Being captain] is a lot of pressure, but it’s also nice to be able to lead the team and share the experience… [This season] I’d like to win as many games as possible, but also just have fun and improve as a team.”

Girls volleyball will play their next home game on Sept. 6 at 6:45 p.m. against Piedmont Hills HS in the main gym.