What’s new at the Welcome Back Dance 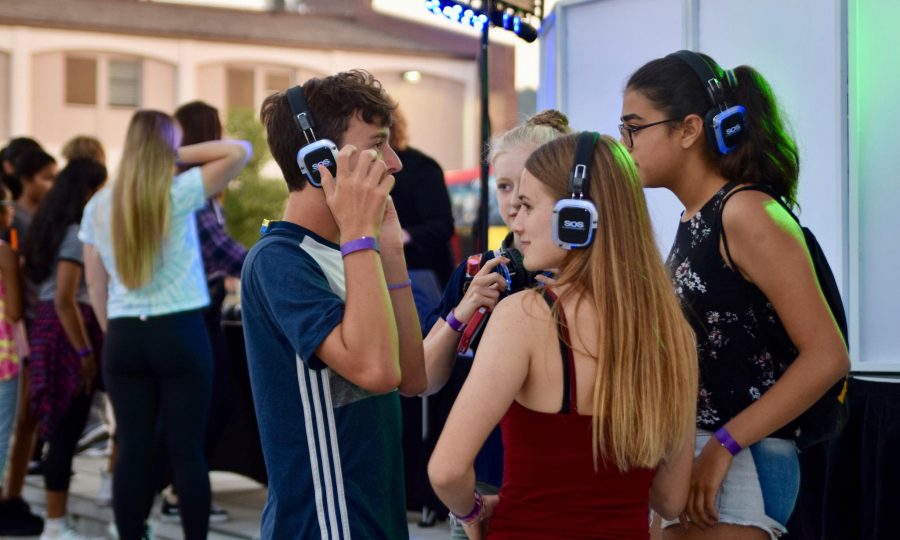 he smell of pizza and cotton candy wafted from the rally court, and traveled all the way to the line of waiting MVHS students that had gathered outside the main gym. The process to enter the Welcome Back Dance was the same as last year, but that’s where the similarities drew to a close. Once inside, an unusual sight greeted the students; one crowd dancing in time with the music blasting through the speakers, and another disjointed crowd bobbing along to  different rhythms with neon colored headphones. However, the split between groups was intentional. The students with headphones were taking part in the Silent DJ option, one of many new features introduced to the traditional first week event.

As a departure from last year, MVHS Leadership and ASB introduced a raffle, a Silent DJ, a popcorn and cotton candy table and a skee ball station to their Welcome Back Dance. According to class of 2020 treasurer Surya Ramesh, the ultimate goal for leadership was to revamp the first dance of the year as they pulled inspiration from a leadership conference last year.

“We went to the boardwalk and saw the Silent Rave,” Ramesh said, “[where they have] silent headphones and a dance party thing, and we thought it was really cool because the silent dance party got a bunch of people involved.”

The silent DJ, one of the more heavily promoted features of the dance, was the most apparent change to the Welcome Back Dance this year. Many students were seen wearing headphones and jamming to the music that couldn’t be heard by others around them. Former Leadership member, Senior Florence Yang, talked about her Silent DJ experience.

“[It’s] really cool [because] it’s all silent from the outside,” Yang said. “But you see people dancing really hard so I just [want to] start off going to the Silent DJ and hopefully more people will come [because] they see how fun it is, because it’s awesome. It’s literally like the coolest thing ever.”

Since the Silent DJ was a new addition to this MVHS social event, Yang noted some initial reactions of students as they familiarized themselves with it.

“I’m trying to lasso some people in, but I can see the [hesitance],” Yang said. “You’re wearing a pair of headphones, and it looks weird.  I think they might slowly become more like, ‘Oh wait, that seems pretty cool, maybe I should go try it out.’”

Despite some initial uncertainty, as the night wore on, more students were seen with headphones on as the dance progressed.

“The problem is that there’s a disconnect from half the crowd who are using this Silent DJ to the rest of the crowd,” Chaudry said. “It makes [the dance] less enjoyable.”

In addition to the Silent DJ, Leadership made several other changes in hopes that the dance would become more unique and entertaining.

“I noticed that there [are] the bouncy houses, and we have the silent dance as well with the headphones,” sophomore Maria Pereverzeva said. “And I don’t think we had Mario Kart or whatever it was last year. Free food is always good, so I’m always down with that.”

Ramesh explained that Leadership tried to fulfill past requests and formulate new ideas to modify this year’s social events so that it would appeal more people.

“From past years, all we did was basketball hoops and air hockey, so this year we [tried] to get some food because I know that was a request from the past years,” Ramesh said. “We brought back Super Smash Bros because that [attracted] a lot of people to the dance.”

With these new additions, dance attendees had a wide variety of activities to choose from besides the traditional DJ and dance circle.

“I think it’s awesome that they have so many characteristics today at the dance [because] there’s just so much for people to do,” Yang said. “You can do literally anything you want at this dance. This is awesome. Good job, Leadership.”