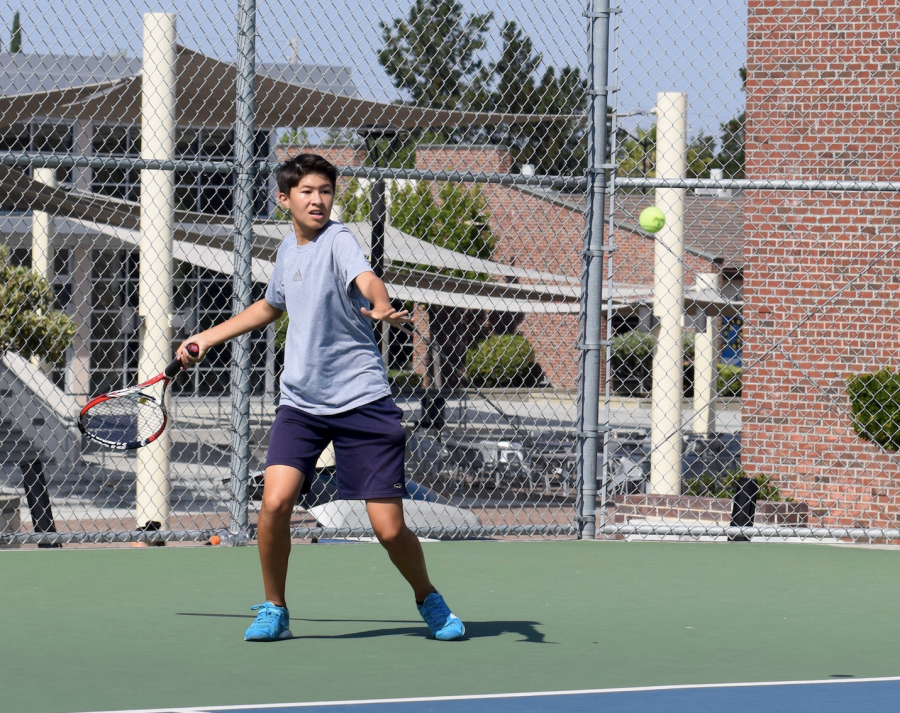 he week before school started, MVHS’ tennis courts were filled with sunshine, lively chatter and the sound of rackets swooshing back and forth. With coach Gene Fortino’s return and the recruitment of four freshmen, the team is expecting to perform well in the upcoming season.

The team has a rigorous schedule ahead of them this season, due to the fact that they are in one of the most challenging leagues in Northern California. However, the team recognizes that their performance throughout the season may not be accurately represented by their team’s ranking.

“You can finish fifth in our league and you still may be the 10th or 11th best team in [all of] Northern California,” Fortino said.

According to Fortino, MVHS is looking forward to the challenges they will face playing against top ranked schools such as St. Francis, Los Gatos, Saratoga and Los Altos. Although Fortino claims these games will be tough battles, he says competing against good teams will help players improve their skills, therefore improving the team’s chances of making a CCS run this year.

And leading the charge towards a successful upcoming season is Fortino. After missing last year’s season for personal reasons, Fortino has returned for his 13th year coaching the MVHS girls tennis team. Under him, the team has won six CCS championships and five NorCal titles in the past 13 years. Although last year’s team had a difficult season as eight seniors graduated the previous year, Fortino sees a lot of potential in the current squad.

“Last year we didn’t make the playoffs,” Fortino said. “But this year, with the four freshmen and a little more [training], I think we’re going to do well.”

Apart from seeking a CCS championship title as a team, the individual players themselves have set numerous goals as well. Many are hoping to improve their United States Tennis Association NorCal rankings, while becoming more confident with their strokes and skills.

“I guess I hope to be playing nationals and probably be [in] the top rankings in NorCal,” freshman Zara Fung said.

Both in and out of practice, the girls devote time to bonding and building strong team spirit. Although tennis is widely considered an individual sport, Fortino and the players acknowledge how important it is to maintain that team aspect.

Rashmi Ghonasgi is one of two senior captains who organize and plan events, activities, and practices. As a long-time member of the school’s varsity tennis team, she provides encouragement and direction to the other team members.

She explains that practices are very relaxed, and the most important thing to her is just that the team plays well and has fun.

“We have a cheer when we start, we always cheer for each other, we eat snacks together [and] we have team bondings,” Ghonasgi said.

Before and after practice, the players, and even Fortino, can be found relaxing near the tennis courts.

“I think that the team camaraderie is so important so we always try to keep it kind of a laid-back, fun atmosphere while still being very competitive, of course,” Fortino said.

And as for Fortino, he is glad to be back with the tennis program, and ready for another exciting and hopefully successful season.

“The way they’ve welcomed me back, the administration, the principal and everybody, it’s really touching,” Fortino said. “I’m really happy, it feels like I’m home.”