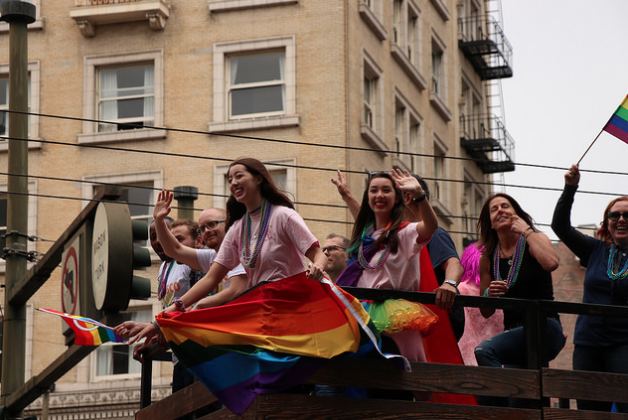 There was color everywhere — flags, capes, costumes. The street was flooded with spirited people and rainbow confetti. The smell of greasy hot dogs and buttery popcorn tempted the hungry people watching the parade in front of them. All of these hungry people were there to support the LBGTQ community through the San Francisco Pride parade.

On Friday,  June 26, 2015, the Supreme Court ruled by a five to four vote that the Constitution guarantees a right to same-sex marriage. That weekend, parades and festivals erupted across the country, celebrating the long-sought victory for the gay rights movement.

Two years later, on Sunday, June 25, a celebration took place on Market St. in San Francisco. Starting at 10:30 A.M., the marchers danced to the blaring music and ran down the street in costumes and colorful outfits, maintaining the joyous atmosphere throughout the day. Look below to see more from parade
attendees.

Why did you come here today?

Albertson: [I am] very very gay.

Tzonev: [I am] extremely, extremely homosexual.

Have you been here before?

Albertson: [It is our] first pride, but [we have been visiting] SF for a while.

What kinds of struggles exist in the LGBTQ community?

Albertson: A lot of people really really hate us for no reason and the misunderstanding that comes with that is hard, but you get used to it after a while.

Tzonev: My family is really not that great about it, but I’m pretty lucky because we live in a liberal area and I’m a tall person—I’m big, I’m scary, so people don’t really bother me as much as they might other people.

What do you hope will be accomplished through events like this?

Albertson: It’s seen as something as taboo and not really normal, and that should change.

Why did you come here today?

Joseph: To celebrate. I mean it’s pride and we’re in San Francisco, so we have to enjoy and be proud.

What are you most excited for?

Matt: Seeing the costumes and hearing what people have to say about Trump… [I don’t have] very nice things to say about him.

How did you guys come up with your costumes?

Matt: He started with those boots.

Matt: And then since he was Tonto, I had to be the Lone Ranger.

Any other thoughts? Joseph: This is for [us] to be proud. Enjoy life. No hate.

What are you most excited about today? Michael McRay: Just to be around such a positive, large amount of people. Everybody is just here to have fun.

What do you hope will be accomplished through events like this? Nick Mosher: Hopefulness, happiness and love.

How did you come up with the idea of dressing up your dog? Spencer Little: Two groomers and a really creative man.

Why did you come to the event today? Michael McRay: Being able to celebrate love and being together as family and friends.