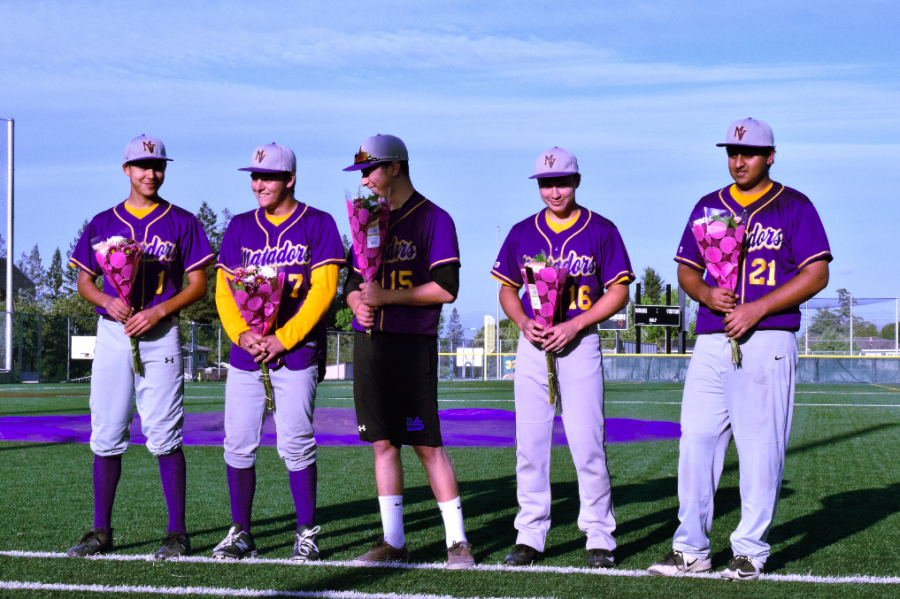 t was uncertain whether or not the Matadors would be able to secure a senior night win before their game against Gunn HS, but a late rally in the bottom of the seventh inning helped give the Matadors the victory with a score of 4-3. On May 8, MVHS took on GHS at home for the seniors’ last home game of their high school careers. Posters could be seen around the field in support of the seniors, while the stands were crowded with cheering students and parents.

After an uneventful first inning with no runs for either team, the Matadors were able to score in the second inning. The bases were loaded with senior Akshay Mahajan, sophomore Ryan Hada and senior Sam Brasesco due to two walks and defensive errors from the GHS fielders. Senior Allen Iwamoto hit a line drive into right field, sending Mahajan and Hada to home plate and the score to 2-0. However, GHS was able to come back in the top of the third inning. An error on part of the Matadors’ allowed a runner to score, bringing the score to 2-1. A line drive down the right-field line allowed another run, bringing the game to a tie at 2-2.

The bottom of the third inning and the inning preceding it both ended as one-two-three innings with no runners advancing to a base. However, in the bottom of the fifth inning, the bases were loaded again after junior Anthony Moll walked and juniors Sathya Kumaraguru and Jarrett James ran back to back singles. As junior Joshua Huang came up to bat, tensions were high in the stands. But Huang came through, hitting a groundball to second base, bringing in Moll and giving the Matadors the lead. Yet GHS came back to tie the score yet again by an error allowing a runner on first base and a ground rule double bringing him in after he stole second base.

With the game tied 3-3 at the top of the seventh inning, the prospect of extra innings seemed inevitable. However, MVHS was able to rally during their half of the inning, picking up the momentum after a double by Kumaraguru was succeeded by James getting on base by a pop up into center field and Huang loading the bases with a ground ball. Mahajan brought the game to a close with a line drive into left field allowing Kumaraguru to score and the Matadors to win their senior night 4-3.

Listen to the podcasts below to hear the seniors’ reflections on their time playing baseball at MVHS.