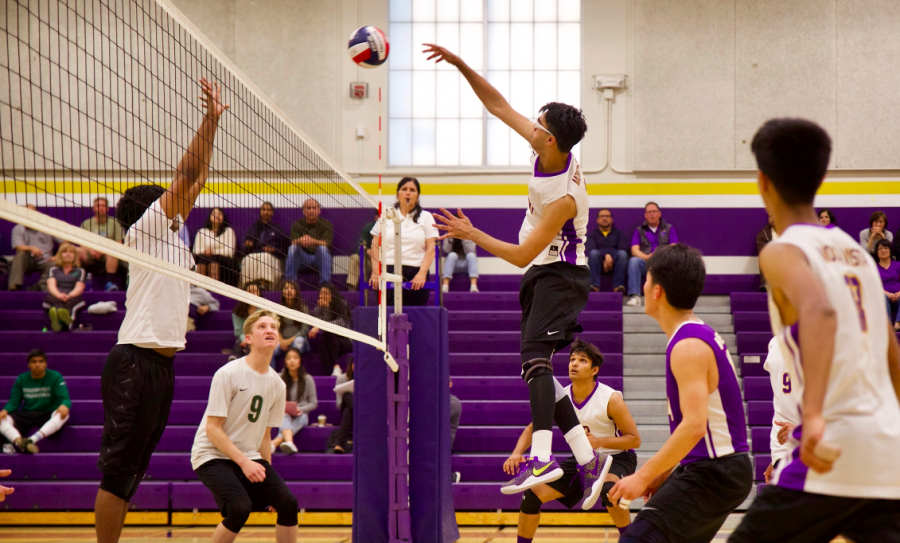 Update: Shen is defensive as Libero. Rao played in the second set. Clapping sequences followed blocks, not kills. The team has five sophomores.

series of “ooh-ooh ah-ah’s” followed by a clapping sequence came from the Homestead High School crowd.

It was nearly the end of the last set against HHS with the score at 16-18 and the Mustangs in the lead. With only the final points left to win the match, an HHS player scored three points off of blocks, erupting the crowd into its traditional cheer.

Just on the other side of the court was the seemingly dispirited MVHS team, some players sitting with their faces in their hands— others glaring at the freshly waxed gym floor.

After continuous deflects from HHS, MVHS fell behind, losing the final set 17-25. But this wasn’t just any typical loss for the boys.

Homestead HS’ boys volleyball team would’ve been undefeated — the key word here being would’ve—  if it wasn’t for their only loss to MVHS on March 24 as they lost the fifth set. The HHS team returned on April 26 to face the Matadors for the second time this season, hoping to tip the scale and give MVHS a defeat before they headed to leagues.

According to a Homestead HS JV player, the HHS team was rumored to be counting down the number of days and practices before their match against MVHS.

“We came in expecting to play hard,” junior and libero Jason Shen said. “That’s what we always do, but I think everyone was a little iffy about the energy of the gym because this is the game that clinches leagues.”

The Matadors started off the first set relatively strong, staircasing the score with HHS. Shen and senior Yash Hegde executed remarkable kills off of HHS’ tips.

Players like Shen, according to head coach Paul Chiu, continued to perform well despite the pressure of keeping an undefeated streak. MVHS didn’t stay far behind until later in the set when HHS’ front line grew aggressive with their kills, throwing off the Matador defense and getting six points ahead at 14-20.

After a timeout in which Chiu reproached his players, the Matadors pushed the offense to get up 20-22, but later failed to return HHS’ cleaner kills. HHS went on to win the first set 21-25.

Off the court, senior Prathik Rao sat on the floor with his leg extended, ice heavily wrapped around his right ankle. Having recently recovered from his previous ankle injury in MVHS’ first game against HHS, Rao repeated his injury on the other ankle in the past tournament and was in a questionable shape to play in the second round against HHS.

Chiu admitted that Rao was essential in defeating the Mustangs.

“We missed Tiki [Rao],” Chiu said. “He’s an indispensable part of [the team]. There’s definitely times where we get stuck in a couple rotations here and there, but he gets us out of it.”

But even without Rao in an effective position, the boys stepped onto the court to begin the second set, some of them even smiling.

The Matadors started off the second set strong with timely blocks from sophomore Gautham Dasari. They continued to dive and execute, but HHS stayed close behind similar to the first set. The teams battled for each point, but MVHS pulled ahead, denying HHS any chance of winning the set with the score at 25-17.

The Matadors had more success scoring more points offensively, but HHS didn’t let their guard down. The MVHS lineup consisted of predominantly sophomores. This is something the team had adapted to this season, with five sophomores on their roster, unlike most varsity teams.

Despite the younger players on the court, Shen admitted that he wanted to ensure that the sophomores were reminded of the level of play they were in.

“It’s rough being a sophomore when you’re going up against seniors and juniors,” Shen said. “I just come from their perspective and focus on getting them ready for the next point because that’s all that matters.”

Just in the middle of the set, Chiu signaled for Rao to enter the game. He played for several points until his ankle gave out and he was under the care of athletic trainer Javier Margarito once again.

It was clear MVHS was more distressed than HHS. During the last points of the set, Hedge and Shen could be seen standing at the bench, lacing their hands behind their necks. Shen was put in near the end but failed to execute his classic dives to save the Matadors. HHS eventually won the set 19-25.

The final set went no better for the Matadors.HHS pushed their offensive front line and continued to send the ball away from MVHS players. Despite deep kills from Dasari and Mathew, the MVHS team failed to come back and lost the final set to the Mustangs 17-25. Facing their closest competitors in the league, Chiu saw the loss as a takeaway as players experienced playing without Rao.

The Matadors will play Los Altos HS during their Senior Night on April 28.