He rises from the ashes 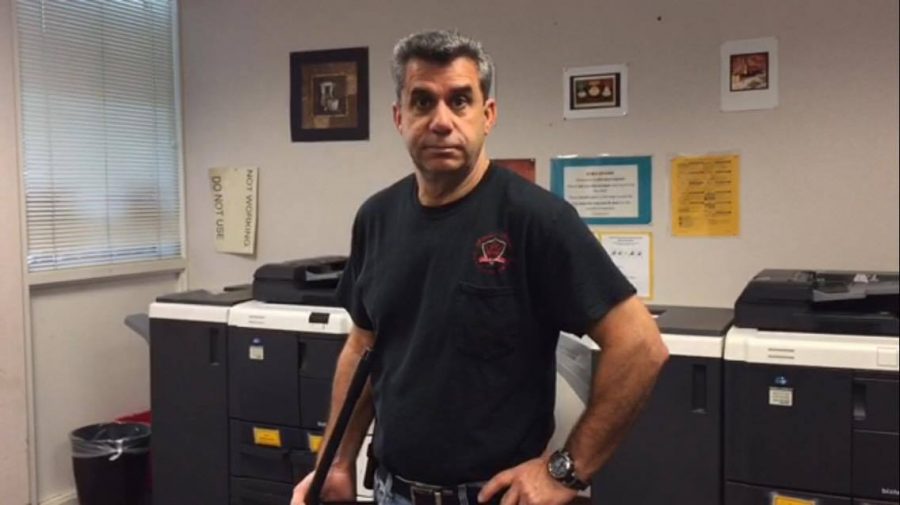 is first heartbreak was when his wife died of cancer. Fourteen years later, he found himself facing his second heartbreak as he watched flames eat away at his house.

Thirty-eight years. That’s how long MVHS custodian Isidro Goncalves had lived in his San Jose house before it went up in flames. It was the house he had purchased with the money he had saved at age 20, three years after emigrating from Azores, Portugal. He’d seen everything in that house, from his children learning how to walk, until their bittersweet journey into adulthood.

The phone call came on March 12, when Goncalves was in San Ramon with his girlfriend. As the fire reached the back of his house, a neighbor knocked on the front door and his son, oblivious to the roaring flames behind him, answered. That phone call was all it took for Goncalves to start driving home.

“I got a little stressed out. It was taking too long for me to get to my house; instead of taking [the usual] 35 minutes it [seemed] like it [took] an hour,” Goncalves said. “I wanted to get there. I just wanted to get there as quick as I could.”

When Goncalves finally made it back home, all he wanted to do was assess the damages at the back end of the house, but the firemen wouldn’t let him. They were still putting out the fire. His son sat speechless in front of the house – he couldn’t believe what had happened. Neither could Goncalves, who, upon arrival, didn’t think the fire would be this severe.

It wasn’t an electrical fire, but was sparked somewhere outside near the back of the home, next to the garbage cans. That’s all the information they have – he doesn’t know whether it was an accident or whether it was targeted. To him, it’s one of those things that is better left in the dark.

“Maybe it’s better because if somebody did it on purpose then I don’t [want to] know,” Goncalves said. “It’ll be the best way, I guess.”

The fire had demolished the family room, kitchen and master bedroom. The other bedrooms, Goncalves estimates, are 75 percent demolished by the smoke and soot. The fire left almost nothing behind, except the smell of smoke lingering in the clothes on his back.

It’s been two weeks since the incident. It will take another six to nine months to rebuild the house. Even though some of the mementos in the house will never be recovered, Goncalves says the memories made there cannot be lost.

“I don’t wish [for anybody to have] to go through that. The insurance will pay to build a new home, but you lose things you cannot get back,” Goncalves said. “It wasn’t things maybe worth a lot of money, but [it was] a lot of things things [that] money cannot buy. Pictures, tapes, various things like that.”

Some of Goncalves’ most vivid memories in the house include the birth of both of his children, trying to fix their house over the years and having family come over for the baptization and confirmation of his children.

Over the years, he’s come to face that sometimes, these things happen. On March 12, it was his house that went up in flames. On March 28, it was a rock that shattered his car window while he was driving home. In light of these uncontrollable events, Goncalves has maintained his positive attitude.

“Those are things we don’t have control over. We learn with life,” Goncalves said. “When we’re younger we’re not as patient — we get mad, we get upset, and we say ‘Why does this have to happen to me?’ We cannot really do that. It was meant to happen to me. There’s nothing I can do about it. That’s how life really is.”

Yet what Goncalves didn’t have control over, MVHS’ administration made up for with a swift and supportive response. Principal April Scott had sent out an email to the school staff notifying them of the incident. Teachers responded, most within a day, with monetary donations and gift cards for Target and Safeway for immediate relief items such as food and clothes. Goncalves also received cash to be able to spend on anything he feels is necessary. Goncalves was touched, and although he couldn’t personally thank every individual who helped, he placed a card in the office thanking everybody for what they did.

“He was a little choked up when we gave him the card because he wasn’t aware of how much people cared for him,” Executive Assistant to Principal Diane Goularte said.

However, Goncalves was not the only one who got emotional, as Goularte, who collected the donations for the gift cards, was also emotional after seeing Goncalves’ dedication and exhibition of strong character. According to Goularte, despite the incident, Goncalves did not miss a single day of work he had not planned beforehand to miss.

“People saw him at work and were surprised by the email because they knew that he hadn’t missed time,” Goularte said. “It wasn’t a situation where we didn’t see him for a few days and knew something was going on.”

To Goularte, this experience alone was able to illustrate how much of a hard worker and conscientious person Goncalves is.

“We have people that might miss work because they get a flat tire and here is someone whose house burns down and he still manages to continue on with work and with life,” said Goularte.

Goncalves knows that no amount of money from insurance or those around him can replace everything he had lost. Yet his sadness doesn’t equate to bitterness — he knows that there’s nothing he could’ve done. With each replaced trinket, he runs farther away from the ghost of that house, leaving his second heartbreak behind.