A reflection on Trump’s first days in office 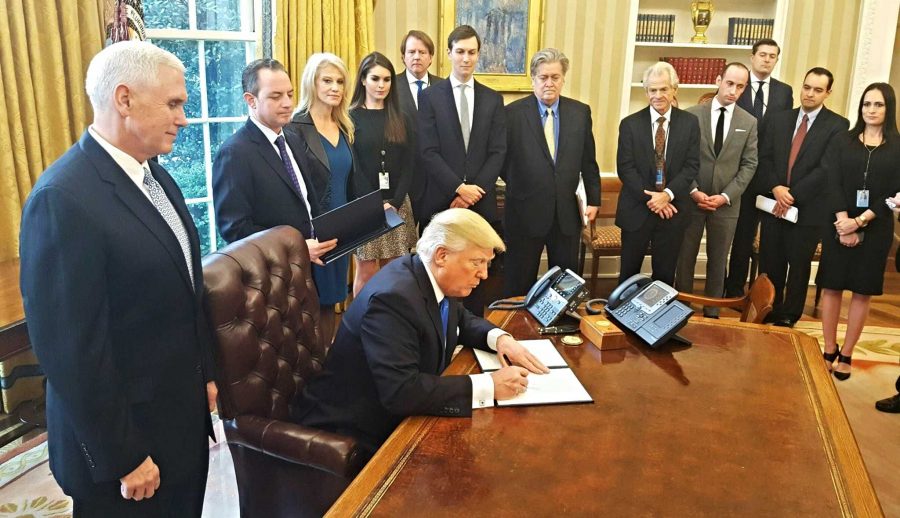 n Saturday, Jan. 21, women across America protested through the historic Women’s March, a show of both protest and solidarity for those affected by President Donald Trump’s campaign promises, such as women, Muslims and LGBT groups. But despite efforts to counter the new President, by Jan. 25, Trump had passed his first 10 executive orders, which were mainly centered around cutting the Affordable Care Act, strengthening national security and restricting abortion policy.

After the events of the Women’s March in San Jose, students reflect on their opinions of the direction the administration is taking, how they foresee it affecting the communities in Cupertino and whether protests are an effective way of countering Trump’s policies.

A big part of Trump’s executive orders focused on restricting the nation’s borders — this means the number of refugees America will accept per year has been cut down from 110,000 to just 50,000, and entry of immigrants from what has been called “terror-prone” countries — Iraq, Iran, Sudan, Yemen, Syria, Libya and Somalia — has been halted for 90 days.

“I think it will really affect Cupertino because people from other countries come here,” senior Alicia Marzolf said. “And it might possibly, in the far future, change Cupertino’s demographics.”

Trump has also issued an order to build a wall spanning across the border of America and Mexico, as well as considerably strengthening America’s immigration enforcement department by hiring 10,000 more officers and prioritizing undocumented immigrants with criminal convictions for removal.

“It’s good that he has national security in mind, but I’m not sure he’s going about it the right way,” senior Bennett Osborne said. “Because [by] doing this you are hurting a lot of people, but he also seems he is going for the whole isolation thing which is going to hurt trade with other countries.”

Since the instatement of Trump’s travel ban, many volunteer lawyers are going to airports to assist travelers that have been detained over their visas or green cards. The ban has been challenged by the 9th US Circuit Court of Appeals, and could possibly end up in the Supreme Court, becoming the first serious test of Trump’s executive authority.

The Saturday before Trump signed his first executive orders into law, women began protesting the new administration. A big part of why is due to Trump’s stance on abortion — on Wednesday, Trump ordered to block the use of taxpayer dollars towards foreign non-governmental organizations that perform or promote abortions.

“I think a lot of people are angered with what he’s doing, especially towards anti-abortion. I think a lot of women are going to continue protesting like they did on Saturday,” freshman Tajin Syed said. “I’m definitely one of them.”

This is a reinstatement of what is called the “Mexico City Policy” which was around during President Reagan. It was rescinded during the Obama administration, but this and the Affordable Care Act seem to be a slow unraveling of Obama’s policies. And while this has angered many women, countering the Women’s March, the March for Life took place on Jan. 27, one of the largest pro-life rallies in the world.

Trump’s actions bring into question the usefulness of protesting, especially in this age of such great division.

“Honestly, I think [the protests] are inspiring, but in terms of change like actual legislative change I’m not sure they’ll do much,” Marzolf said. “Staying aware is a good thing, being sure what legislation is going to be there, going out there and making your voice heard, voting, call and write to your Congress people because they will listen to you.”

Trump’s new executive orders leave many things up in the air, as he already begins to unravel the administration preceding him. His cuts on health care and abortion, his strengthening of national security have left some in trepidation, but yet also many hopeful of the next four years to come.