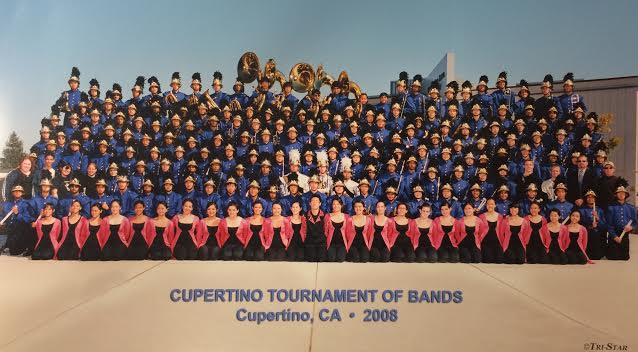 espite waning interest that lead to its discontinuation in 2013, the absence of the MVHS marching band has since left a hole in the music program — a hole of the tall feathered hat, booming drum and sharply tailored uniform variety. Current band teacher and conductor Ricky Alegria states, while the marching band may have a negative “nerdy” image attached to it, it has an energy unique from the other music programs at the school.

Alegria’s band experience can be seen in the way he walks, according to his students juniors Anisha Kollareddy and Hasini Shyamsundar. He has what is described as a “marching band walk,” evident because of how much he enjoyed his time in the high school marching band — he is still friends with many of his band members to this day. The countless hours spent together practicing after school, working as a unit to perfect drills and music sets are enough to bond any group of people together. The close knit community, the energy, the physicality. These are reasons why Alegria plans to revitalize MVHS’ marching band, and with renewed student interest, the MVHS marching band is no longer distant history, but a possible future.

Senior Alex Maertens was a part of the marching band for the few months it was still in session during his freshmen year. He had been a part of the band program since he had taken band at Kennedy Middle School, and while it was sad for him to see the band go, its end felt inevitable.

People were already hesitant of marching band because the extensive time commitment. But once being in the band program meant mandatory participation in the marching band, it caused many students to drop the class entirely.

“The expectation was that we’d get a choice  — we could play in the stands, which is pep band, or out in the field, which is marching band,” Maertens said. “But then we had to be in both and dedicate our time to both, which put people in a compromising position.”

In the end, the lack of participation forced MVHS’ marching band to discontinue.

When Kollareddy was in middle school, she remembered how a lot of classmates in her band class decided to stop playing once they reached high school, expressing their disinterest in continuing the program. The growing disinterest was made worse when the marching band was discontinued the year before she was to enter high school.

“I was actually really sad because at Kennedy during one of the football games, the advanced band would go over to MVHS and play with them,” Kollareddy said. “So it was sad knowing that I wouldn’t have that opportunity like every other school does — it was supposed to be the next step in the path and it wasn’t there.”

When Alegria came in 2014, the first thing he wanted to do was reinstate the marching band.

“Understandably, I feel the term ‘marching band’ is kind of a dirty word at MVHS,” Alegria said. “When I first mentioned marching band in class, I got so many eye rolls, and so many groans but that’s because [the students] didn’t know what it could be. It’s lot more physical as far as what you are expected to do. You are up; you are around; you’re moving — you are using all your senses to play the music. That, to me, brings a bigger sense of accomplishment.”

But it wasn’t until last year’s FUHSD Marching Band Expo did student interest begin to pick up again.

While MVHS does not have a marching band itself, according to Alegria, the other band directors were kind enough to still invite the band to the district wide expo. While the other schools marched, MVHS band would stand on the field and play their music, just like any other pep band would. As Shyamsundar stated, being able to see their peers from other schools accomplish what was once thought as the impossible was enough to make marching band seem like a more tangible idea to band students.

Right after the expo, Alegria had at least ten or twelve students run up to him, determined to start a marching band of their own. The interest meeting hosted afterward, just going over basic time commitments and responsibility, had a turnout of over fifty students.

For Alegria, what played a big part in renewing student pride for the band program is deciding to move the pep band from the benches to the field during half time. Being moved more into the spotlight helped the students take more pride in their work, and this pride showed at the end of the 2016 expo for many pep band students.

“We went [to the expo] last year too, but it didn’t have the same impact on us back then.” Kollareddy said, “At first we thought these schools were too good, we can’t really do it — we just stood in formation. But this year, we took one step — no forty steps forward. We started at the back of the field, and we started marching 40 steps. It was more work, but it was a step forward and we thought that maybe if we took a bunch of steps really fast we could start marching band too.”

Alegria states that so far, administration has been supportive. To help drum up interest, members of the current band program have been going to Kennedy and Lawson Middle school to hopefully snag new members for the new up and coming marching band.

For both Kollareddy and Shyamsundar, the biggest challenge would be laying the foundation. Nothing has been set in stone yet, so the members of the new band would have to figure out the unfamiliar territory for themselves.

Building a marching band would take time, according to Alegria. He would not find it unreasonable to expect a low turnout or interest for something brand new. Many students at MVHS have never seen a drum line or the the uniforms before. But he found that showing videos in class and asking the band to perform at the expo is the gradual momentum they need to get a new thing started.

“Basically we have to create our own identity.” Shyamsundar said, “Other marching bands, they have their own personality, and I think that we started from ground zero. We have to build something beautiful, and we have to make it stick.”