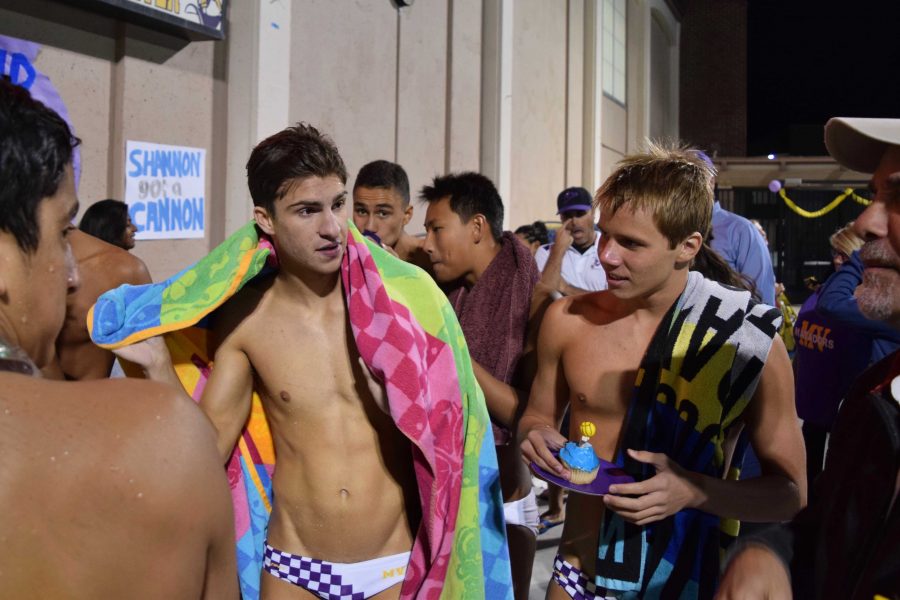 ake a look at the pool now, at the empty bleachers and stationary goals, and it seems like the calmest place on campus. You couldn’t tell that weeks ago the lights were blazing on a small but roaring crowd during the boys water polo senior night, as shot after shot tore across the surface of this now quiet pool. The fall season is over. The goals won’t go back into the water until next fall, when a new batch of faces will replace the class of 2017. They will have to pick up the pieces the graduating class left behind with a bunch of grins, and a whole lot of goals.

Closing out their final game of the season, the Matadors defeated Mountain View HS 13-12 with a last second shot by senior captain Spencer Springsteel, giving them yet another reason to celebrate on senior night.

By the time the team welcomed the Spartans on Oct. 20, the end of the season was approaching. They were sixth in the league, with only a league tournament left in their season and CCS just out of reach. Tonight, all seven graduating seniors would take to the pool for their final game at the Ron Freeman Aquatic Center.

The first period of the game was marked by a slow start. By the time Springsteel scored the first goal of the game, only five minutes remained in the period. With three minutes remaining, the Spartans went score for score with Springsteel as he brought up the Matador score with three more goals against the Spartan defense. By the end of the period, the crowd was beginning to get fired up on senior night.

“For me personally even after the first quarter ended I was kinda just ugh,” Springsteel said. “It was all just setting in that I was tired and had to just power through,”

In the second period, the Spartan defense blocked Springsteel from scoring, allowing junior Sina Faridnia and senior Aditya Pimplaskar to score. The Spartan offense overwhelmed the Matador defense early in the period, and with three minutes left in the period they had brought their lead to 5-6. After a Matador timeout the game slowed down, ending the period with senior goalie Scott Mogensen chasing down the ball to the cheers from the crowd.

“Especially having a crowd here, too [helped],” Springsteel said. “Every time we had a score or block, or had a good defensive play, I would hear and be like okay I want to do it again, keep it going.”

Once the second half started, the game began to inch closer. The Matadors’ offense was relentless, picking up a failed shot and pushing it back in for the 6-6 tie. Senior Pranav Madanahalli put his name on the scoresheet with his own goal, giving the Matadors the lead once again in the game. Somehow, after three missed shots, the Matadors still retained possession of the ball for Madanahalli to score once more. Once the water settled, there was an argument with the referees about the player count in the pool.

“You’re not supposed to notice [the referees] are there,” Coach Ben Vierra said. “It was a tough game to call.”

The Matadors kept their goal after the referee’s decision. The period ended at 8-8, and the shooting gallery began.

The Spartans took a shot and changed the score in their favor 8-9. After another goal by the Spartans, senior Brendan Hughes and Madanahalli responded by leveling the playing field to a 10-10 footing for both teams. Slowly, almost possession by possession, both teams brought the score up to 12-12, with only a minute and a half left on the clock. With only two possessions left for the Matadors, senior John Lentfer made a break for the goal and rose out of the water for the incoming assist.

“John just took his eyes off the ball. He did the right thing,” Vierra said. “ [He] popped up, did his job, he just didn’t think about the shot before he caught the pass.”

Fans slumped back onto the bleachers as Lentfer missed the goal and the Spartans took over the ball. One opportunity down, and now it seemed like there was only one left for the Matadors to reclaim their senior night.

The Spartans failed to convert the possession. With a new purpose, the Matadors called a timeout with only 34 seconds, one possession’s worth of time, remaining.

“We called the timeout, and then [coach] was like ‘Okay we’re going to run the same play that we did before that worked,’” Springsteel said. “And so we did it, I made it.”

For the final seconds of the game, the crowd could not sit still. Posters for seniors and disembodied heads were floating, bobbing and weaving with each possession, each shot. MVHS was seconds away from capping off their last home game, and the paper score board on the far end of the pool was stuck at 12-12. Springsteel went for a drive, and the crowd shot up to their feet in his wake. Milliseconds later, the shot was good. MVHS left the scoreboard at 13-12 with six seconds left. Madanahalli made a connection to Hughes from the top of the pool, and Hughes had given it back to him until Springsteel broke free of his defender in front of the goal. With twelve seconds left, Springsteel powered in the shot across the cage for the senior night win.

“There was kind of a second where I felt like this was kinda the best way to end my senior night ever,” Springsteel said. “This was great.”