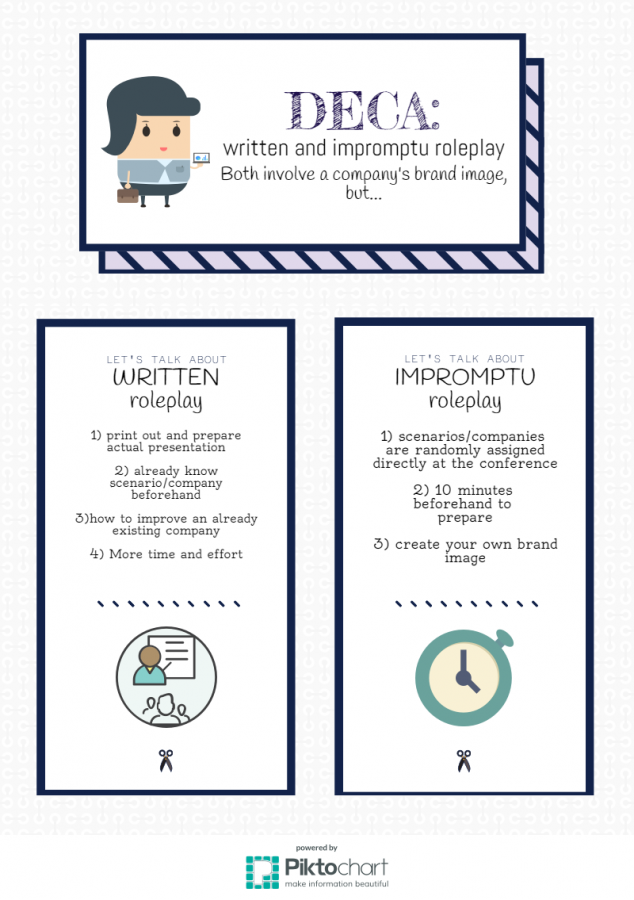 The closest competitive DECA conference may be next January, but officers are already training members in roleplay in preparation for them. “Roleplaying” consists of a ten minute job interview, in which members are randomly assigned a job in a business and must explain why they are capable for this specific position. Members incorporate common business concepts, such as finance, marketing, hospitality and management into their roleplays.

“[Marketing roleplays are] the first interaction the company has with customers. For example, the people who don’t have an Apple product themselves know that the Apple company is known for simplicity and elegance. If you were applying for Apple (your roleplay), I would make sure to uphold the brand image of Apple,” she said.

With 200 to 300 people in each event, a winning roleplay boils down to natural charm, first impressions and the ability to summarize what you can offer to the company in 10 minutes. In order to practice, members can review a document with “practice PI’s,” or “practice role plays.” Similar to a roleplay is a “written plan,” in which members also create a brand image for a company, but already know their topic and prepare a presentation before the conference.

“[An impromptu role play] is a high stress situation. If you screw up you’re like ‘Oh no no’, but at the same time, that’s what makes it so exciting,” sophomore Palak Jain says. “It’s like natural, free and a lot more fun than a speech or anything.”

While DECA trainees should be informative and analytical in presenting their company’s brand image to the judges, officers also encourage members to give off a “personal side.” Last year, in Kale’s own “Kay Jewelers” roleplay, her group advertised that it isn’t a ring the company is selling, but a promise between you and your partner.

“It was super sappy and general,” Kale says, “but like it was something different than what everyone else was doing.”

As for her number one tip? “Smile.”