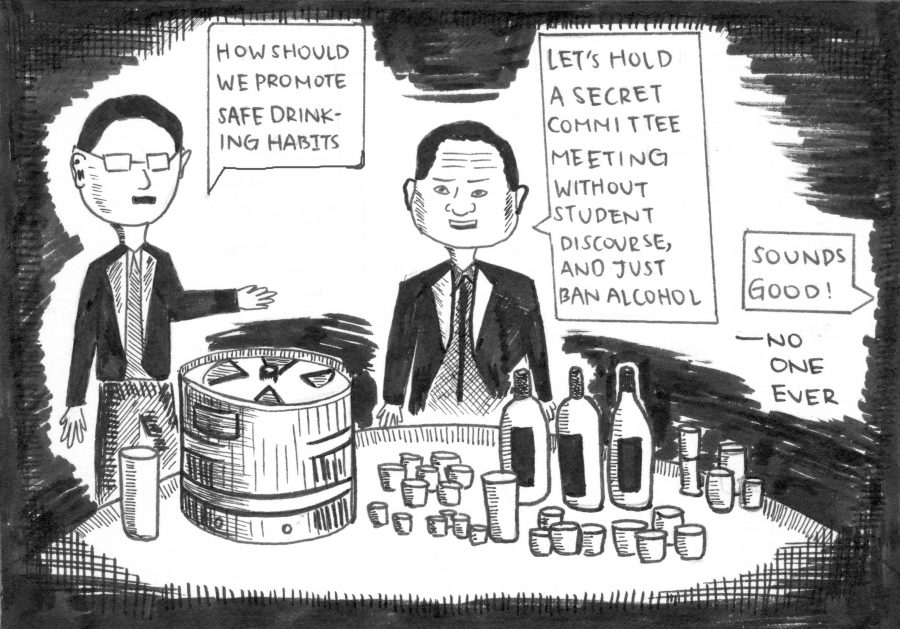 The last line is all one needs to know and all that matters.

In the uneasy wake of the Brock Turner case, a former Stanford University student who raped an unconscious woman behind a dumpster on the school’s campus, Stanford updated its alcohol policy this August. Whether it was in response to sexual assault or not, the alcohol policy is undoubtedly biased and unrepresentative of the students — and most importantly, uneffective.

Stanford’s updated alcohol policy bans containers of hard alcohol, spirits (alcohol content of at least 20% ABV) and distilled liquor in containers 750 millimeters or larger from campus. The ban is a “harm reduction strategy,” limiting the consumption of alcohol, and improving Stanford’s drinking culture.

“When considering a policy, one can look at it through multiple lenses,” wrote George Boardman, Stanford’s vice provost for student affairs. “I challenge you not to focus on the policy as something to be worked around.”

Certainly, the majority of alcohol retailers may only sell containers 750 milliliter or larger, which will reduce the availability of alcohol. The financial “barrier,” or jump in the alcohol’s cost-per-volume, from larger containers to smaller containers, could potentially turn away students.

Nicknamed by the students as an “open-door policy,” students are requested to leave doors open if consuming any alcohol, and faculty can intervene if things get out of hand. This establishes a sense of freedom for the students, and decreases the need to chug Budweiser in the confines of the bathroom, shrouded in darkness. Simultaneously, faculty have a sense of relief, as they are quickly informed of dangerous situations.

However, in the light of the “hard-alcohol” ban, students may begin “closing the doors” to drink their hard-alcohol, not only losing the sense of trust between students and faculties, but increasing alcoholic behavior “behind closed doors.” For example, RAs may be unable to quickly intervene during a transport.

The alcohol policy, itself, isn’t exactly the tipping point. It is Stanford’s Alcohol and Drug Subcommittee of the Mental Health and Well-Being Advisory Committee’s ten participants behind the policy and their limited diversity. According to Catherine Götze, Stanford student and writer of blog “Cath in College,” the alcohol committee recommended a ban on all hard alcohol in “frosh dorms” — a strategy to decrease transports to hospitals.

However, Gotze and a fellow student were the only undergraduates in this committee of ten and the only ones to vote against the policy, while the eight other non-undergraduate committee members voted for the policy. With the policy influencing all undergraduates, it’s expected — required, really — that a greater percentage of students participate in the voting, so the student voice can be heard and acted upon. 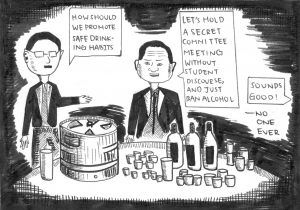 The policy is geared towards improving the alcoholic atmosphere, and fails to meet the mark. Parallel, in the context of sexual assault, the policy won’t decrease the possibility of rape, either.

Her drunkenness, his drunkenness. Any victim’s drunkenness, any rapist’s drunkenness.
None directly correlate to sexual assault, although intoxication is a significant — but not the
perpetuating-factor. One is raped because of another human being, a predator. In soberness, he or she already perceives women or men as “objects” free to pursue and engage. Thus, when in drunkenness, the predator executes this belief. As to how, who and where a rapist became accustomed to thinking this way, it may be the result of slanderous media, Hollywood’s gender stereotypes or perhaps the beliefs of a father or friend. Ultimately, it is up to Stanford to unearth the “backstory” of a rapist, instead of fussing over alcohol container sizes.

This new policy is certainly a start to reforming the alcoholic atmosphere. Yet in the grand scheme of “sexual assault,” the alcohol policy is a nuisance and distracts Stanford from the real aggressor: the assaulter’s mental mindset. Their image of “palm trees and golden sunlight” defamed, Stanford University may be feeling unsettled and “raw,” unaccustomed to being out in the open in such a negative way, ravaged by both the public and its own students.

The spotlight has always and will forever shine upon Stanford University, but for academic and athletic achievement.