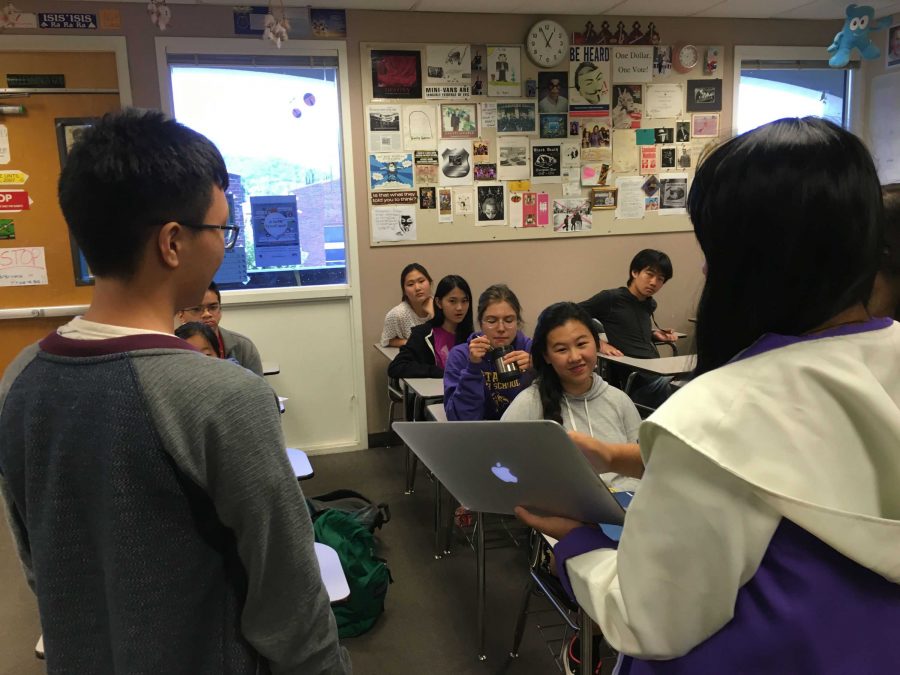 La Pluma officers explain the spreadsheet to new staff members. La Pluma hopes that by re implementing the spreadsheet, the club can have a more organized way to keep track of member’s stories

Stephanie Lam
he newly picked members of the La Pluma staff sat quietly in their seats as the eight officers stood at the front of the classroom. The solemness lingered in the room as the officers each  introduced their name, position and one type of writing style they wanted to practice, like slam poetry. It wasn’t until head selections editor senior Olive Wu jokingly told the staff that the gray gridded contacts in their eyes weren’t normal that the staff laughed and seemed to lighten up.

La Pluma held its first staff meeting on Oct. 7 in Literature teacher David Clarke’s room. But just because the staff decision was final didn’t mean that La Pluma limited the number of people who could offer submissions to S and S, their monthly publication.

“[La Pluma] is pretty selective, but at the same time we keep in mind that the final selection of the staff officers is not what determines our final publication,” said secretary senior Ankita Chatterjee. “We do publish submissions from online or other sources [and] consider a wide range of writing when we’re actually publishing our S and S.”//

As the officers touched lightly on the upcoming plans for La Pluma, it became clear that the officers were eager to prepare the staff for publication. In order to ensure that each issue went smoothly, Wu presented the La Pluma spreadsheet// The spreadsheet was designed specifically to keep track of staff member’s stories when it went through the editing process for the final publication.

In addition to a new spreadsheet, officers also encouraged each staff member to create a porfolio// of their work. It’s a new goal that selection editor senior Neelufar Raja hopes will benefit members in the future when they want to showcase their work.

The introduction about spreadsheets, groups and SNS lasted until the final minutes of lunch . While some members immediately left, other members like junior Grace Chang stayed afterwards to talk with some of the officers about upcoming events. Chang has high hopes for what La Pluma can offer her, and, after coming to the first meeting, is excited to be apart of the publication.

“I really like the idea of having a magazine that publishes our own work and writing.” Chang said. “I joined La Pluma to [not only] improve my writing, [but also to] connect with a larger scope of writers in the MVHS community.”

La Pluma hopes these new changes will help spread the word about their publication, and offer students new insight into the world of literary and creative expression.