“Audrie&Daisy” is a film of truth 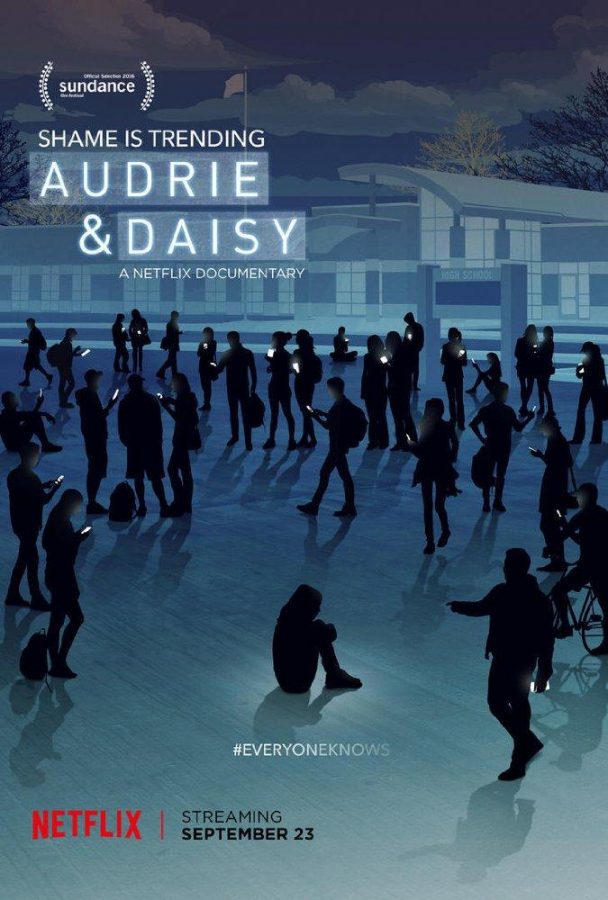 A poster photo for the film "Audriey&Daisy." The movie was produced by Actual Films before Netflix gained rights to it. Photo from IMDb.

Dylan Tsai
Sexual assault: a morbid and graphic topic, difficult to present in a film. Cyberbullying: intangible, nearly impossible to capture. Nevertheless, directors Bonni Cohen and Jon Shenk set out to report on both. For the past two years, Cohen and Shenk have been investigating the stories of two sexual assault and cyberbullying victims: Audrie Pott and Daisy Coleman.

They interviewed family, friends, police, lawyers and even the sexual assault culprits. They looked at culprit depositions. They scourged social media for evidence relating to the two cases, and then combined the two stories into one film. The result: a wholesome, true account of modern-day sexual assault.

“Audrie&Daisy” is both a documentary and a film, recording two sexual assaults while presenting compelling character stories. Audrie, a former student of Saratoga High School, was sexually assaulted while intoxicated at a Labor Day party in 2012. After vandalizing Audrie’s body with marker, the assaulters took illicit pictures of Audrie and distributed them electronically. Audrie was left struggling to figure out what had happened, who had the photos and how to fix her now tainted reputation. Unable to cope with the rumors and damaged reputation, Audrie took her own life. Daisy — who was also sexually assaulted while intoxicated — attempted to commit suicide as well. She was unsuccessful. Her case was brought to the attention of the local court, but the culprits were initially found innocent and Daisy was declared a liar and subsequently cyberbullied. “Audrie&Daisy” combines these two sexual assault stories to form a narrative of modern-day sexual assault: a type of sexual assault that destroys not with the action itself, but with the ensuing shaming and self-blame.

The accuracy of the film’s account is twofold. Though the details of the cases are too complex and convoluted to include in a single film, the directors manage to find universal truth by focusing not on the cases, but on the people involved. Completely avoiding the use of a narrator, “Audrie&Daisy” places the spotlight on each individual involved in the case. The inclusion of nearly all conceivable sides in the cases and candid footage of each person’s everyday life help the film transcend the typical court case and victim sympathy stories. The victims and culprits become people rather than archetypes, and the film becomes more of a story than a documentary. Furthermore, because there is no narrator suggesting interpretations, the film encourages free judgment on what each character says. “Audrie&Daisy” presents a challenge that cannot be ignored: Decide for yourself what’s wrong and what’s right.

What’s even more impressive is how the film emulates the experiences of sexual assault victims. Just as the sexual assault victims had to slowly piece together what had happened to them, the film forsakes summary in favor of revealing fragments of information that eventually fuse into a cohesive narrative. Each surprise is followed by another as the effects on the victims, the hashtags used in social media shaming and the sexual assaulters’ reflections are revealed.

To further portray a relatively intangible issue, the directors employ their fair share of special effects. Instead of using the standard dark light anonymity, Netflix and the directors merely add a layer of animation onto their faces to maintain their human character. In addition, the filmmakers brought the cyberbullying aspect to life by recreating Facebook messages and superimposing shaming tweets onto a city of houses. These special effects bring the film away from the realm of documentary and into the realm of entertainment. A very real topic rendered using a fake medium. This issue is especially difficult for the directors to navigate in their animation of Daisy’s assault — there could have easily been over dramatization, underplaying or factually incorrect representation. In fact, to some degree, it was guilty of all those mistakes.

But the animation is so carefully executed, so ambiguous in detail yet accurate in ambiance, that it allows the audience to experience the scene rather than watch it. The three-minute animated scene features aesthetic, motion-filled visuals that are not graphic, but are as eerie and convoluted as the world must have seemed to an intoxicated Daisy. While the result is not quite the “truth,” the effect it provides rings true.

Even so, sticking to the whole truth has its downsides. The problem is that, as a film, “Audrie&Daisy” portrays the complexity of the sexual assault situation a little too accurately. Both cases were chaotic, with grey areas and controversial resolutions and a plethora of factors that lead to the victims’ suicide attempts. But instead of focusing on a single issue, they included nearly every element that harmed the people involved in the assaults. Further, they only significantly emphasize the cyberbullying aspect so as to not completely overshadow the less noticeable harmful factors. The directors portray every inch of the chaos. This objectivity is a rare and commendable attribute for a film, but not being able to exceedingly emphasize any single factor is also a handcuff for the directors — especially at the film’s end.

The directors can’t end with controversial statements from the culprits or ludicrous examples of social media shaming; the film’s objectivity would be lost, along with many of the other intended messages. So, “Audrie&Daisy” ends on a montage of the victims demonstrating their strength, accompanied by uplifting music, that leaves a feeling of satisfaction, of long-sought catharsis — of closure at last. But does the audience really deserve to feel good?

The uplifting ending, while a great choice for objectivity and an emotional finish, underplays the moral dilapidation that the first hour and twenty minutes of the film take care to elucidate in full. The film’s objectivity risks weakening the impact of all messages. The fact is, the directors know a little too much.

Without a shred of doubt, “Audrie&Daisy” is truthful, in depth and wholesome. Without resorting to the overly dramatic effects of a Hollywood film, it portrays, with extreme accuracy, the plights of those involved in sexual assault and cyberbullying. There are times in “Audrie&Daisy” that leave even the most informed pundit about the cases leaning forward, scenes that leave the most stoic watcher engaged and interview clips that leave the most reserved bystander judgmental. Yet, no matter how well-researched and well-presented the stories are, not many viewers can consolidate that many contradicting viewpoints, judge that many characters and understand that many complex emotions over the course of just an hour and a half. “Audrie&Daisy” is as close as it can be to a complete profile of modern sexual assault, but whether or not everyone can deal with such a complete profile is a whole different story.