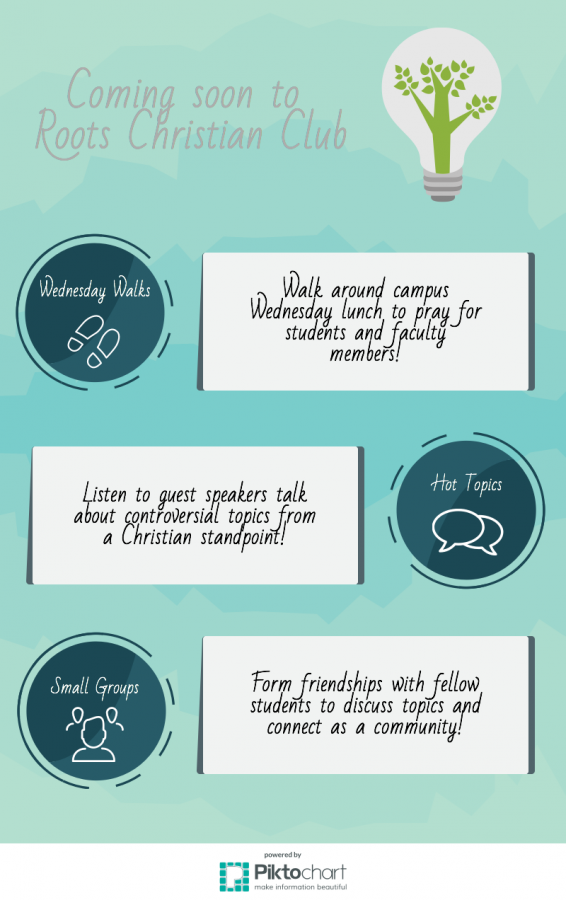 The presences of new Roots officers aren’t the only new changes for Roots Christian club. At their first meeting of the year on Monday, Sept. 12, the club officers announced new events and changes soon to come.

Senior Amanda Lam, the current social manager of Roots this year, hopes to expand the club to other parts of their community rather than focusing only on interdistrict outreach. Lam hopes to spread awareness about Roots to invite new students to join and show current members that there is a large Christian community open to them. As she has been attending the club ever since her sophomore year, she’s aware of what changes would help spread interest and improve attendance.

“I think that the overall goal for Roots is for us to be more collective as a community,” Lam said. “We want to make sure all the Christians on campus kind of know that we’re there for each other.”

Last year, the club had held weekly events called Wednesday Bread, which were prayer/worship sessions held on Wednesday mornings. Lam said that not a lot of people attended, so the officers decided to change the event to Wednesday Walks. In these walks, students will walk around the campus every Wednesday at lunch to pray for the school. Lam hopes that this will encourage non-Christians to take an interest in their club, as well as Christians who are not a part of Roots.

Many members of Roots are excited to try the upcoming events in the club. Sophomore Brenden Yu, who has been coming to Roots since his freshman year, found the future meeting topics to be informative and interesting. Yu was especially curious in the new  “hot topics” of the year, which are discussions where speakers come to talk about topics controversial to Christianity, such as evolution and homosexuality, from a Christian viewpoint. While these subjects go against the teachings of God in the Bible, Roots does not want to offend people who do believe them. Rather, they aim to encourage other Christians to promote love through God within their communities even if they do not necessarily have the same beliefs.

Roots IDC Representative junior Kevin Tong was very pleased with the turnout for the meeting. In addition to new changes, Tong said that the club is keeping old events as well, such as the IDC Praise Night, an event where local high schools can gather together and worship as one united body of Christ. He believes that these events help the students from different districts become closer together.

“A lot of times we’re separated, we go to different schools,” Tong said, “But we’re worshipping the same God, so this is kind of a way to bring us all together.”

Although the structure of the club has changed, the overall goal hasn’t. The club still encourages students to root in Christ, a goal originating from a verse in the Bible.

“Let your roots grow down into him, and let your lives be built on him. Then your faith will grow strong in the truth you were taught, and you will overflow with thankfulness.” Colossians 2:7