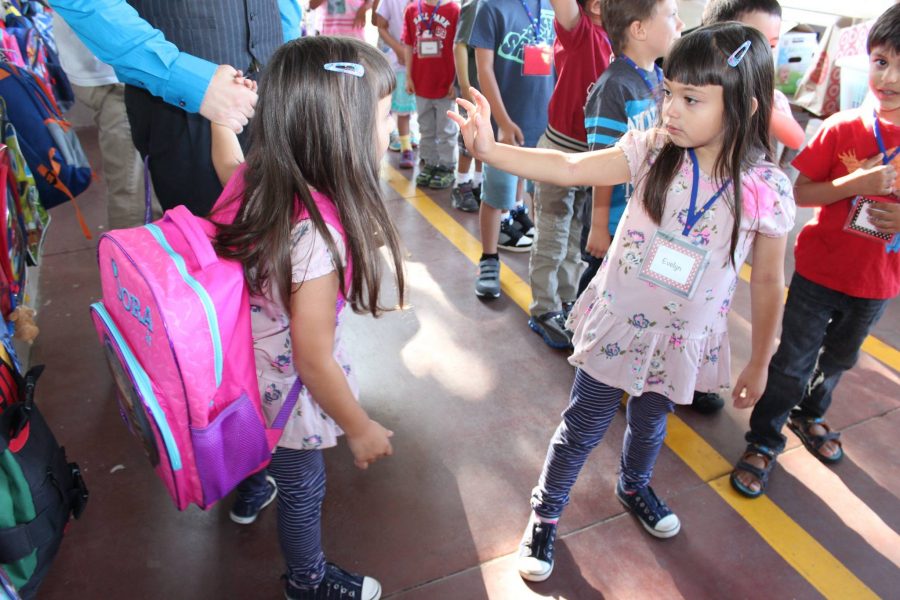 Daniel Lin
t’s the first day of school, and they’re saying goodbye to you. The panic starts to set in. You are afraid of leaving them behind for the first time, after watching them grow for years. You choke back a nervous sob as they part on their merry way, hoping you’ll be able to get through the day. Alone.

Separation anxiety is something even the most independent people have to face on their first day of school — including teachers.

For English teacher Vanessa Otto and Social Science teacher Eric Otto, parting with their 6-year-old twin daughters Elizabeth and Evelyn was a milestone in parenthood.

“The first day of kindergarten, that was kind of an emotional day for us,” Vanessa said, “probably more so than them, because it was also our first day at MVHS.”

After arriving at work first thing in the morning, Eric and Vanessa hurried over to Lincoln Elementary School, adjacent to MVHS, to say their final goodbyes to their beloved daughters. The scene was set — benches with different bins for school supply donations, students’ name tags in lanyards and two lines of kindergarteners, hoping their parents would stay just a little longer.

According to Vanessa, the most nerve-racking part of leaving her kids was not on the first day of school. It was the day before.

“It’s the anticipation of the day before the first day of school, when you start to realize, ‘Oh my god, summer’s over,’” Vanessa said. “They were babies and it’s officially over. Now they’re entering the educational world.’”

She looked at her daughters through new eyes, eyes which saw them as scholars, little kids and independent beings. Yet the proud parents of five years could not help but feel a part of their lives being torn away from them.
They were babies and it’s officially over. Now they’re entering the educational world.”
English teacher Vanessa Otto
“You feel very vulnerable,” Vanessa said. “You feel like a little piece of you is left behind and in the back of your head for the rest of the day, wondering how they’re doing or wondering what they’re doing at that exact moment.”

“It’s all good things,” Vanessa said. “It’s just that letting go of the past can be hard to do.”