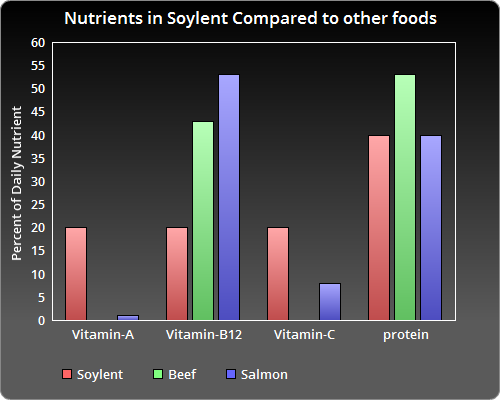 Soylent, founded by CEO and engineer Rob Rhinehart, is a meal replacement available in beverage, powder and snack bar form, formulated to fulfill all of an adult’s nutritional requirements and appeal to on-the-go millennials.

At $2.69 per bottle and $7.14 per bag of powder, the affordability and nutrition replacement Soylent advertises is far-fetched. Four bottles of Soylent, or $10.76, equates to 1600 calories — a day’s worth of nutrients? What sorcery is this? Soylent’s nutritional label even boasts: “While not intended to replace every meal, Soylent can replace any meal.” Considering Soylent’s bioengineered algae and algal oil can substitute everyday “Big Mac lipids,” why, if the Trader Joe’s of the world were to disintegrate, one could still live with a happy, soy-protein heart, in awe of Soylent the Savior! Supposedly.

In all seriousness, considering Soylent nutrients are consumed “alone,” such as Vitamin C without the orange itself, their effectiveness may be dampened, and thus the advertised nutrition of Soylent an exaggeration.

“The [Soylent] design has all the nutrients you need, technically,” biology teacher Kyle Jones said. “Like taking a vitamin pill, the vitamins [of Soylent] are part of a healthy diet, but missing a natural state.”

According to Jones, if one were to chug this “cardboard milk” until his or her deathbed, jaw deterioration and digestive problems are probable.

Soylent is advertised as a meal replacement and huge time saver. It’s thriving in the high-pressure, time-intensive professions in the tech industry. Even students at MVHS are beginning to take notice of it through word-of-mouth or online sources; junior Sameer Kapur first heard about Soylent through social media.

The reason for this endorsement stems from the lack of time many people have to make meals, or even go out and order food. As people put more time into their careers, “work” becomes a “home” — Google even offers homey nap pods to hardworking engineers — Soylent becomes an attractive alternative to normal food.

Ultimately, Soylent provides a way for someone to simply put powder into a glass, add water and get what the company claims is sufficient energy and nutrients to function. People can stay in the office and work while “eating” dinner, increasing the time spent working. Even people who claim they dislike the taste of Soylent say they might take it just to save time, if they had to. Junior Vedant Sathye said that in a pinch, he would still reach for the “cardboard milk.”

Despite the general positivity the Soylent trend has received, odds are that at least this version of Soylent will die out like most trends do. While the novelty of drinking your meals wears away, Soylent will solely and constantly be judged on its practical benefits. And therein lies the problem with Soylent. Of the people that have eaten it, none would say they would chose the taste of Soylent over regular food. Soylent is at best a utility, a nutritional drink available anytime in the United States and Canada. And it doesn’t really do a good job at that either, considering the questionable nutritional value of this engineered drink — which really renders at least this version of Soylent practically useless, a trend destined to flatline.

If grandpas and grandmas are giving thanks for Soylent on Thanksgiving, instead of turkey, remember that food isn’t solely nutrients: Food creates an intimate, conversational atmosphere, of “How was your day?” and “Eat your vegetables!” Think “Lady and the Tramp,” except Soylent, instead of spaghetti. Cringe.

“You don’t want to be the person who’s so focused on whatever it is that they don’t even have time to enjoy food,” Jones said. “You’re overbooking yourself or you’re going too fast, too much.”

Breakfast, lunch, dinner, midnight, and mid-midnight snacks are intermissions in one’s heady lifestyle, and sipping Soylent at a computer screen defeats the purpose of “breaktime.” One should not be so antisocial, apologies, so 21st century “savvy,” ubering from work to home in a flash, chugging “cardboard milk” in a deserted cubicle, instead of you, a date and a plate of spaghetti on Valentine’s Day.