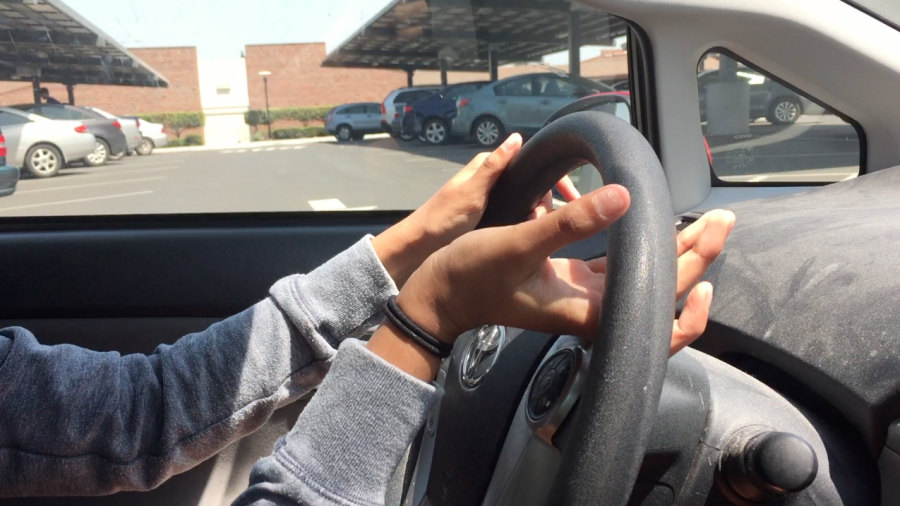 Chetana Ramaiyer
t was around 7:30 a.m. on April 9 and junior Devya Ramanathan had just arrived at Henry M. Gunn High School with her friend in the driver’s seat. They were there to take the ACT — something Ramanathan never ended up doing.

That morning, she left her house feeling relaxed as she was already familiar with the testing process of a standardized exam. Ramanathan’s father, Kalyan Ramanathan, had driven her to the exam the past two times she had taken the SAT, but oftentimes he would get very anxious before the exam and pass that anxiety onto Ramanathan herself.

When she arrived at the school, she discovered she had left her wallet at home. Her wallet, which contained her student ID, was a necessity to take the exam. She called her dad to bring her ID with only 30 minutes left before the exam. Her dad was surprised since Ramanathan usually wasn’t one to forget important items on the day of a test. Ramanathan, on the other hand, wasn’t as scared since she knew, or at least thought, she still had time. But by 7:45 a.m., the traffic had thickened. 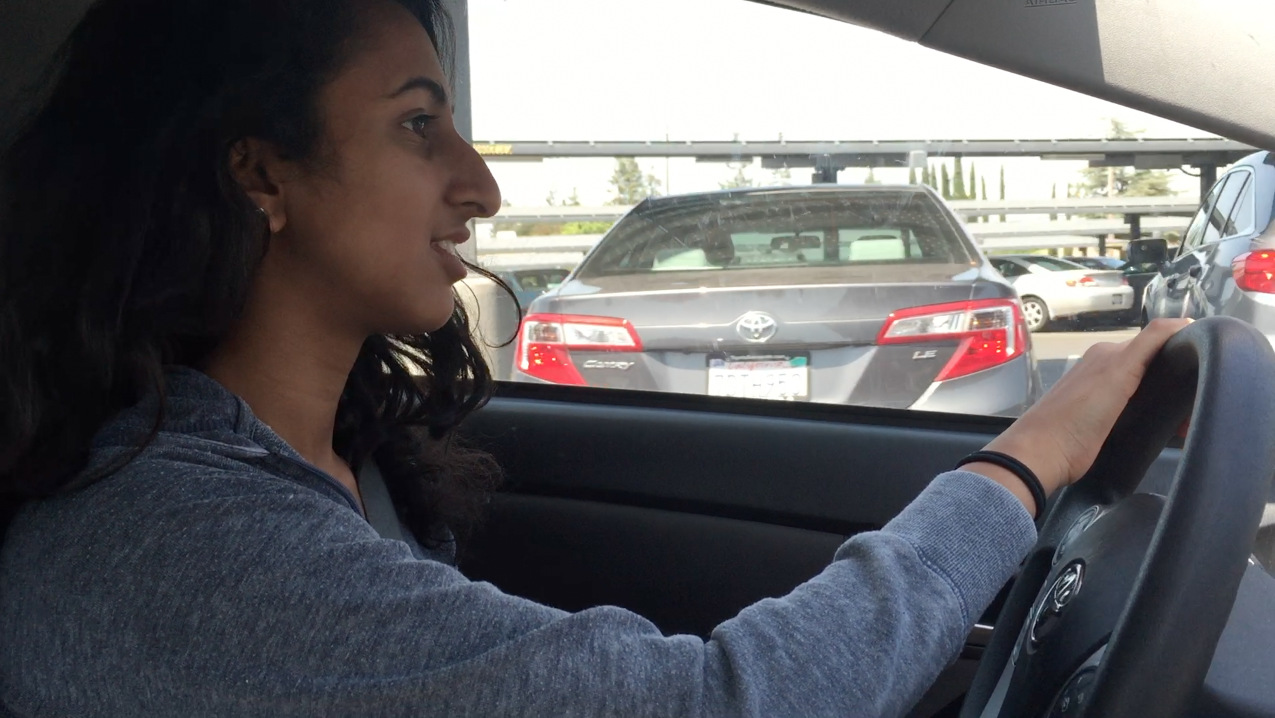 A month after her accident, Junior Devya Ramanathan is able to drive again. Photo by Chetana Ramaiyer.

t was 7:49 and Ramanathan still didn’t have her ID. Her dad finally turned onto Arastradero Road, only to find a line of what he approximates as 30 cars in front of him to turn into Gunn High School.

“I’m looking at those, I don’t know, 30 cars in front of me and I’m like ‘ok there is no way I can take a left turn and get into the school,” Kalyan said.

It was around 7:51 and Ramanathan’s dad parked on the other side of the street from where Ramanathan was waiting. With traffic clogging the road and time running out, her dad signaled for her to cross over.

Ramanathan stood there for some time, debating whether she should cross or not. And by around 7:52, she found herself on the other side of the street.

“[The traffic] was on a completely different level,” Ramanathan said. “There were cars everywhere and I had to walk in between cars and weave my way through the road.”

Relieved that she made it to the other side, she grabbed the ID from her dad and prepared to cross back over. Her dad wished her good luck and told her to walk back carefully. Or at least that’s what Ramanathan thinks he said; for the minutes leading up to the accident are a little hazy.

“I don’t know, it just happened all of a sudden,” Ramanathan said. “I flew maybe 10 feet or so and I was just lying in the middle of the road. And all I remember was that people stopped their cars and parents were getting out.”

It was around 7:55, five minutes before her test and 25 minutes after she arrived at the high school, that Ramanathan was hit by a car.

“I don’t know,” Ramanathan said. “I just kind of sat there. But I think my first thought was ‘oh my god, how am I going to take the ACT now?’”Her phone landed 50 feet away, completely destroyed. Her wallet, which led to the whole ordeal, and her bag were thrown in opposite directions. Most of her clothing was ripped apart. When she was thrown on her back, she skidded against the road, cutting her back in bloody abrasions.

“I don’t know,” Ramanathan said. “I just kind of sat there. But I think my first thought was ‘oh my god, how am I going to take the ACT now?’”

Kalyan describes how he had already gotten back into the car, ready to leave the chaotic mess of the traffic, when he heard her scream.

Junior Devya Ramanathan posted this photo on Facebook the day of her accident to explain to friends and family what had happened. Photo used with permission of Devya Ramanathan.

Her dad quickly carried her off the middle of the street and back to his car. Parents and pedestrians were gathering all around him, some crying, some calling 911, and some simply watching everything that unfolded after the accident.

“As a parent obviously you don’t want your child to go through things like this,” Kalyan said. “I wish I would have crossed the street and given it to her.”

Once Ramanathan was in the ambulance, Kalyan called his wife. Ramanathan’s mother, Meera Ramanathan, under the impression that a minor accident happened asked if her daughter could still take the test. Her mom later describes how she hadn’t realized the seriousness of the accident and only once she arrived at Gunn High School did she understand the situation.

“Does your life ride on it? Does your child’s existence depend on this thing? …Of course it doesn’t right? But at that moment, t-minus 15 minutes before the actual test, you’re not thinking about [that],” Meera said. “Because of the tension, a lot of mistakes are made and it doesn’t have to be that way.”

“Does your life ride on it? Does your child’s existence depend on this thing? …Of course it doesn’t right? But at that moment, t-minus 15 minutes before the actual test, you’re not thinking about [that],” Meera said. When Meera arrived at Gunn High School, people came up to her to hug her and were crying for her, but because she didn’t witness the accident herself, she describes how it was a lot like drinking up their emotions. Although she later found out that her mom didn’t understand what was going on, Ramanathan was shocked with disbelief when she heard her mother say this at the time.

“I was just pissed off,” Ramanathan said. “I was like ‘oh my god are you kidding me, I just got hit by a car, I’ve been lying in the middle of the road, I can’t feel my feet, everywhere hurts, this is unbelievable.”

Her mom had to drop her sister off at a friend’s house, so she wasn’t there with Ramanathan as they arrived at the hospital. But Ramanathan recalls being too angry with her mom to care about where she was. The nurses at the hospital had to continually calm Ramanathan down because of how furious she was with her parents.

“It got to a point where every time [my parents] came into my room, consciously or not, my heart rate elevated,” Ramanathan said.

“It got to a point where every time [my parents] came into my room, consciously or not, my heart rate elevated,” Ramanathan said.A few hours after the accident, a doctor had examined Ramanathan’s scans and determined that the extent of the injuries were relatively minor compared to what could have happened.

The person behind the wheel wasn’t a complete stranger either—she was the mother of one of Ramanathan’s childhood friends. The driver had intended to break upon seeing Ramanathan crossing but accidentally hit the accelerator instead. And when Ramanathan would’ve been taking the ACT, she was in the ER instead, with a broken ankle and foot, along with bloody scratches all over her back.

month later, Ramanathan wears a maroon boot around her leg. Around the house, she uses a wheeled chair where she can rest one knee to get around. Looking back, Ramanathan can’t grasp what drove her to do something so risky. She admits to having jaywalked before, but it was always on a small road with little to no cars.

“I feel like at that point in time, I was just really impulsive, and I just did it because I didn’t want to be late for a test that meant more to my parents than it meant for me,” Ramanathan said.

Although Ramanathan was physically fine, tensions between her parents and her have increased since the accident.

“[My parents] always revert back to ‘you couldn’t take the ACT,’” Ramanathan said. “But I got hit by a car. I’m so dependent on them these days and they just keep bringing it up.”

Kalyan looks back and thinks about how much stress he was under to get Ramanathan the ID. There were only 11 minutes until the test began and he was nowhere close to where Ramanathan was. Although he admits Ramanathan could’ve been more cautious when it came to crossing the street, he understands that the accident could’ve been much worse and is thankful regardless.

For Ramanathan, it wasn’t missing the ACT that was important to her, but rather the decision she made to jaywalk in such a dangerous situation that made her change her perspective. The pressure she felt to take the exam was what pushed her to do something so risky. She’s also come to the realization that she likely isn’t the only student that would have done the same thing in her situation.

“This accident really made me reflect on how much I was prioritizing school and academics and I don’t know, everything related to college, over my own life, of all things.” Ramanathan said. “It’s kind of sad to think that the majority of students, probably even here at this school would … put themselves in grave danger just so that they could take a test.”

Ramanathan will get her cast off around May and is prepared to take the ACT in June. But this time, she knows there are worse things than being a few minutes late to the test.