No offense, but: Examining our politically correct culture 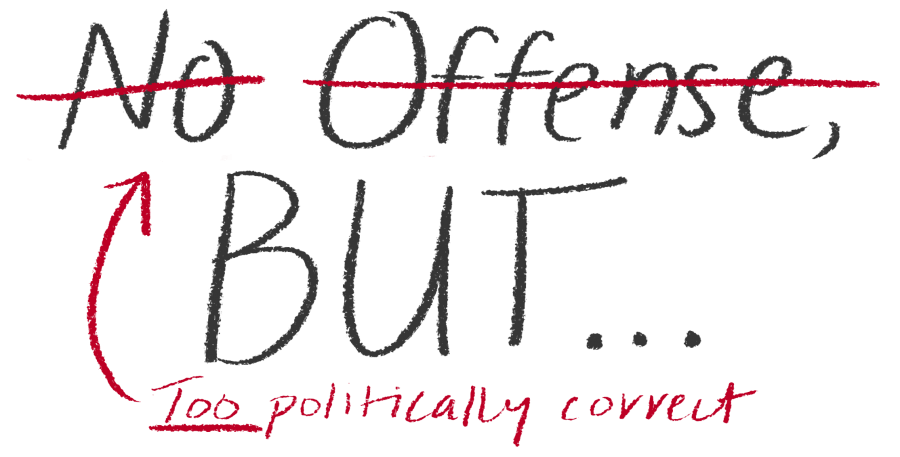 he phrase “politically correct” has been around for a long time.

You see, back in the 1950s it was considered Marxist-lingo — essentially, a “politically correct workers’ state!” was the same as a Communist state. Fast forward a couple decades and you run into a new definition: a rude phrase labeling leftists as people who thought politics was all about using the right words. By the early 1990s, politically correct, or “PC,” culture became synonymous with left-leaning activists.

As for today? Political correctness is The Donald’s worst enemy.

Doesn’t this new definition sound slightly absurd? After all, by erasing discussions which cause discomfort or offense, we’re hindering the opportunity to learn about controversial topics that need to be discussed in our society. We’re essentially placing a gag order on our citizens to protect everyone’s feelings — which would make no sense in a country which prides itself on the freedom of speech. Therefore, political correctness must be a bad thing, right?

But this definition of political correctness has become too extreme; you can be politically correct and disagree with an opinion. The concept of being PC is about having respect for those who are the subjects of a discussion.

Millennials have faced considerable backlash over being PC. We’ve been labeled as “overly-sensitive” by sources like TIME magazine, with the differences between being politically correct and overly-sensitive trivialized.

As for the common theme? Our generation is too easily offended to hear a joke.

The view on our PC culture can be seen on college campuses. As authors Greg Lukianoff and Jonathan Haidt put it, people feel like millennials’ political correctness is about turning “campuses into ‘safe spaces’ where young adults are shielded from words and ideas that make some uncomfortable.”

Yet as another group of millennials leaves MVHS followed by complaints of being “too PC” to laugh at “edgy jokes” (lookin’ at you, Jerry Seinfeld), maybe it’s because we care about respect. Maybe it’s because we want to hear humor and discussions where the punchline isn’t [insert offensive term for gay]. Even in a survey of 298 MVHS students, 59 percent point out that being politically correct is equivalent to respecting the targets of a discussion.

Ultimately, political correctness is not a movement to destroy the expression of neutral stances on controversial issues. And as PC as millennials are made out to be, not all of us support ultra-liberal stances on every social issue. As Forbes points out, liberals as well as conservatives can “champion these policies.”

No offense, but it’s about respect.