Custodian Thomas Orsua turns in his radio, rides his white cart to the cafeteria, throws away the trash he collected during the day and signs out. Heís done with his shift for the day. But instead of climbing into his car and heading home, Orsua shifts gears and heads to the locker room to change for his second job.

Now, he’s on the open field, timing, training and encouraging students to  improve their personal records.

Thomas Orsua. Custodian by morning, sprints and relays coach by mid-afternoon. But Orsuaís track story doesnít begin here. It begins 50 years before, 1964, in Sunnyvale High School (now Kingís Academy), where he was a track star. 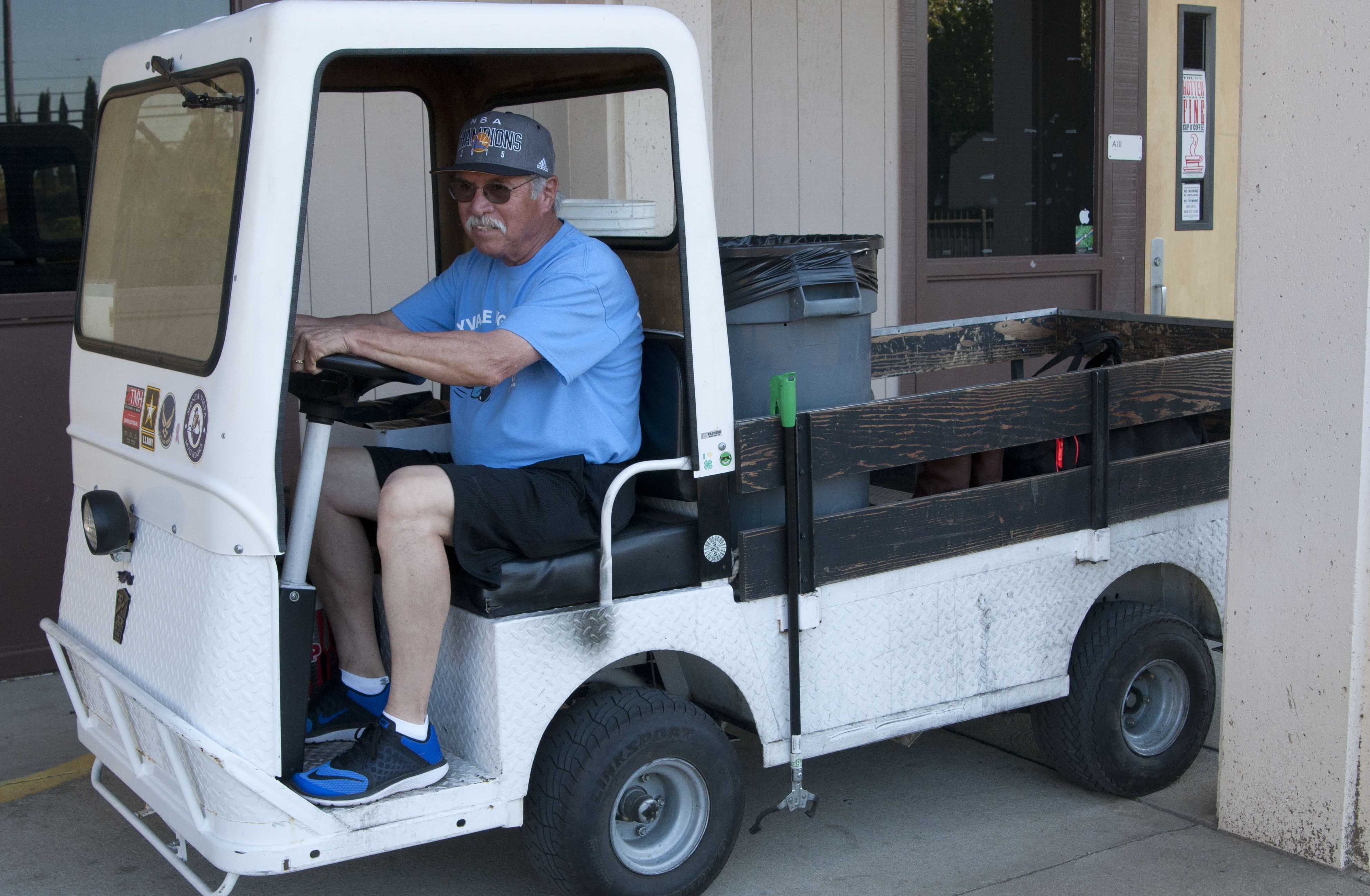 Custodian Thomas Orsua rides his cart to the cafetria for rounds afterschool . He then heads to the locker room to coach Track & Field.

Alongside him during track meets were his older brother Joey Orsua and his younger brother Charlie Orsua.

Due to Joey Orsua’s prominence on the track team, Thomas and Charlie Orsua joined the cross country team before the 1964 school year began, practicing with the team during preseason practices before even entering high school. During track meets, his brothers would encourage him to beat his competitors and set new records.

In his freshman year, Thomas took home gold in the Santa Clara Valley Athletic League (SCVAL) 880m. For sophomore year, he ran the 880m again, taking home the gold in both the SCVAL and CCS. Junior year, he set the mile record for Sunnyvale High School. Then, in senior year, he fell off the radar.

“I started dating. Girls got in the way,î he said. ìMy coach took me aside my senior year and told me that I had a scout looking at me when I was a junior, and if I had continued running well my senior year as I did my previous three, I probably would have got a scholarship to go someplace.”

But Thomas didn’t do so well, and that was the end of his career as the star of the track team.

[My coach] told me that I had a scout looking at me when I was a junior, and if I had continued running well my senior year as I did my previous three, I probably would have got a scholarship to go someplace.” Custodian Tom Orsua

After graduating high school, Thomas went to college, but instead of going to college on a scholarship, Thomas enrolled at De Anza College.

But a few months ago, Orsua received an email.

“There was an email that came through and they said they were looking for an assistant coach for sprints and relays”, Orsua said. “And I thought well, I did that in high school so maybe Iíll give it a try.”

It was an opportunity for Orsua to share what he had learned and experienced in his high school career. But he soon learned that there was a lot more to it than just having the previous track experience.

“I had to take some courses on coaching fundamentals, from the California Interscholastic Federation, I had to be familiar with all the articles and bylaws with their constitution,” Orsua said.  “I finished those two courses, took a course on concussions, I’ll be taking a course on cardiac arrest and then I’ll be taking a first aid class.”

It was Mar. 22, the first home meet of the season. As one of the fastest runners passed by, Orsua cheered loudly. Although Orsua was cheering for the person in the lead, he was also watching the other MVHS competitors.

“I want to learn everybody’s name, know what events they’re in, and eventually know their times,” Orsua said,  “so I can talk to them and be a little specific, rather than being general about it. I’m getting closer to reaching this goal.”

Orsua is constantly learning. He calls himself a rookie coach, admitting that sometimes, some of the older students know more than he does, but he observes head coach Kirk Flatow. Orsua notices the way Flatow rallies all the kids at the beginning of practice, the way he coaches the students, the way he pinpoints weaknesses in even the best of athletes.

“He’s just really supportive,” Sophomore Andrea Chang said. ìEven though he doesn’t really say much, he always there to say good job, with a smile and everything.”

Since becoming a coach, Orsua has learned about the amount of organization that goes into each track meet. When he was in high school, the only thing that mattered to him was his own race. But now, Orsua appreciates the volunteers that quickly set up the hurdles, the announcer who runs around with a microphone reminding athletes of upcoming events and even the people whose job it is to make sure the track is clear.

Despite the realization that not every student is going to win and that he has to stay at school for up to four or five hours extra, Orsua can’t imagine letting his job go.

“Every coach is different in some way. There are the coaches that always push you really hard and always tell you ‘Do better next time’, and there are coaches that tell you ‘yeah, you did really really good,’” Track and Field athlete freshman Evelyn How said.  “Coach Tom [Orsua] is like that, he sometimes doesn’t tell you what to improve on, but he just encourages you.”

After this year, Orsua hopes to retire from his job as a custodian and  continue coaching track. He also wants to call up his older brother to  encourage him to  become a track coach.

Although Orsua didn’t continue his track career in college, he wants to encourage them to use their athletic ability to help them propel academic careers, imagining how different life would have been had he been recruited to a college track team.

“I wouldn’t have been here right now. I might’ve gotten married and had a couple of divorces by now, or [I could have been] involved in some sort of corporation zooming to the top and all of a sudden crashed and fell, and I would have been trying to look for another job,” Orsua said. “But now that I’ve gotten to this part of [my career], I’m glad that I’ve done it.”