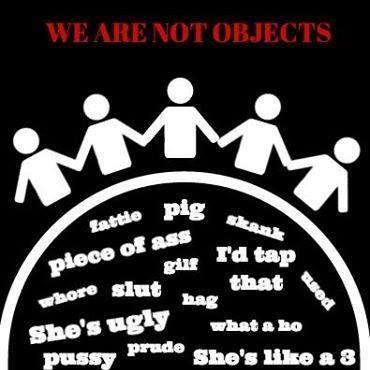 n April 17 at 8:00 p.m., a senior at Lynbrook High School, LHS, who wishes to remain anonymous, updated her profile picture with the hashtag, “#NotaNumber”. The profile picture was in response to a Facebook groups recently discovered by the LHS community.

“We found out that there were these Facebook groups and chats of guys basically ranking women,” the senior said. “If you’re giving someone a number, it’s just objectifying them.”

According to the anonymous senior, all girls who were not up to the standards of participants in the group would be made fun of, both online and in person. The senior then said that the ones deemed physically “acceptable” by them were disrespected and objectified.

The senior acknowledges that even without these public Facebook groups, students may use their private Facebook chats for similar purposes, and similar occurrences would happen regardless; however, this had turned into a public Facebook group, complete with initiation-like processes for people looking to join.

“Naming [a list of] the top 5 girls at Lynbrook will get you in,” the senior said, “so it was just kind of disgusting to see my friends and classmates be objectified like that. It’s not fun.”

“It’s just a shame that they would go that far and stoop so low that they would want to objectify women,” Meduri said, “but that’s their choice, can’t do much about that.”

At LHS, many, like the anonymous senior and her friends, felt that it was their responsibility to take action since the group was used as a serious medium to objectify and harass women. So, other students created the movement #NotaNumber to show that they weren’t afraid to put down such practices and to raise awareness about the fine line between appreciating someone’s physique and portraying them as a sexual object.

Meghan Rai, junior and a former MVHS student was introduced to the Facebook groups and the movements against them soon after she joined LHS.

“I was kind of shocked and I was like ‘Oh my god, this school is so crazy, and I don’t want to be here.’ I didn’t feel like I really trusted anyone.” Rai said. “I was really upset and angry. It happens a lot apparently, and the most you can do is fight against [such ranking practices]  and hope people will recognize your voice.”

Rai soon became a part of the movement known as “Women Against Ranking” and posted the picture along with her sentiments on the matter. The response to “Women Against Ranking’s” efforts featured support, however a lot of students simply did not know that such groups existed. Some even disagreed and claimed that the students were making a big deal over it, Rai said.

“I guess they didn’t find it as big of a deal because they just thought it wasn’t sexist or anything. Maybe it wasn’t, I’m not sure. But it was definitely very rude and cyberbullying at least, if not sexist,” Rai said.

MVHS junior Shreevika Mitra believes that sometimes it’s easy to ignore the true implications of ranking and take it as a joke.

“The people who created it might not have been thinking about the repercussions that it has, and when people make things about that, they’re not thinking rationally.” Mitra said. “I think the people who wrote that should think about if it was written about their sisters or their mothers. If women in their lives were talked about that way, how they would feel and think back and think ‘is this right, what we’re doing?’”

Mitra thinks that education is the way to go, suggesting that the LHS administration be notified and a rally be held to explain to the students the full impact of their actions.

She believes this isn’t just an issue of gender, but more of an issue of objectifying human beings. These sentiments were shared by the anonymous LHS senior, who intended to spread her message about sexual harassment without targeting a specific group. Although the anonymous senior faced support from many of her friends, both male and female, she also saw posts from some other peers, particularly male peers, that felt targeted by the movement.

“One person, I remember he said that he felt this movement was targeting men in general at LHS and… that we were painting all the guys a bad image… but that’s not the point,” the senior said. “The point is that we weren’t trying to target the group in general. We were just using the opportunity from the group to speak up about this issue and if they were on board with this movement I feel like they should have been okay, because plenty of other guys were sharing our profile pictures too.”

The issue is not just about gender or even about sexual harassment or objectification, but according to Mitra, it comes down to identifying the difference between a teenager’s natural tendencies and publicly disrespecting someone.

“I think we all tend to objectify people.” Mitra said. “We’re teenagers; we don’t always think rationally, but I think we cross a limit when we do it so openly and in a way that’s so degrading.”