Made up of makeup: using special effects makeup as an art form 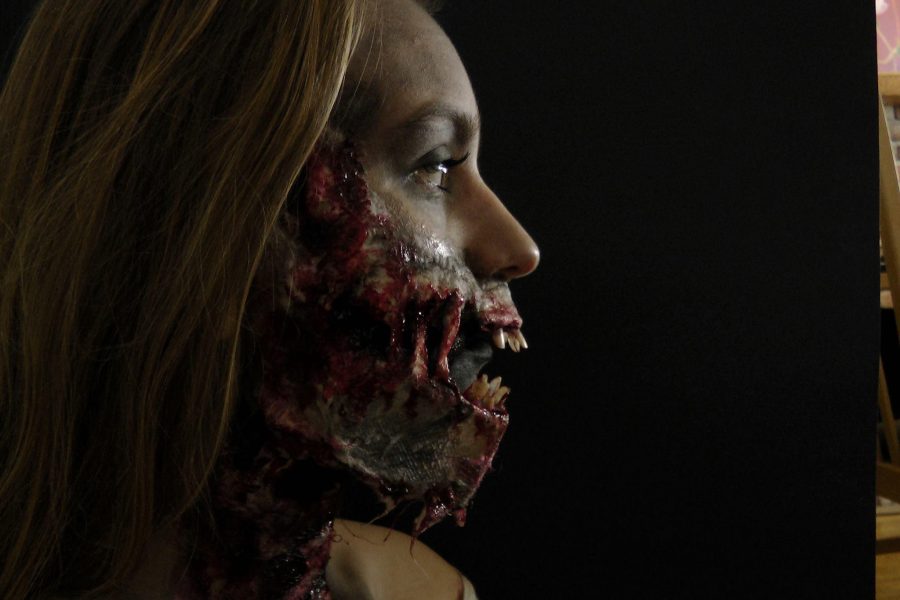 Ilena Peng
very so often, junior Nadia Berndt can be seen with bloody cuts all over her face, her skin peeling off in a way that would make any who see her do a double take and wince.

While typical high school girls may use light makeup as a part of their daily routines, Berndt uses it as an art medium to transform her face into something else. Using tools like gelatin, silicone and liquid latex, Berndt can make herself become one of the undead.

The application of special effects makeup, otherwise known as FX makeup, is dramatically more time-consuming than regular makeup, with each look taking Berndt anywhere from two to four hours to complete. However, Berndt still likes it more due to the creative freedom it allows.
There’s not a lot of wiggle room [in traditional makeup,] you can maybe change up a lip or an eyeshadow color. But when you do special effects you can literally change the structure of your entire face, have green skin, or have a really long nose.” Junior nadia berndt
Berndt cites junior Kayla Gottlieb as one of her most supportive friends when it comes to FX makeup. Gottlieb says that Berndt often sends photos of her makeup looks to their group chat and she that she typically reacts to the scary ones by telling Berndt that she hates her. Gottlieb blames a week of nightmares on Berndt after seeing one of Berndt’s gorier makeup looks.
Blood and gore isn’t really my thing, but it’s still impressive.” junior kayla gottlieb
Despite the occasional scare that her friends receive from Berndt, they continually support her endeavors.

Junior Jemma Serre is another one of Berndt’s supportive friends. And even though both Gottlieb and Serre don’t consider themselves to be particularly good at makeup or particularly interested in it, both find it very impressive what Berndt has achieved using nothing more than her face as her canvas.

“It’s really cool… that she’s found that thing she really connects with and that she has that artistic expression with the way that she does her makeup,” Serre said.

Meanwhile, Berndt continues to build on her collection of FX makeup tools and hopes to continue to improve, saying that she’s gotten in touch with a cinematographer to hopefully take her skills and showcase them on a more professional level. And although Berndt might not view special effects makeup as the most realistic career goal, she still considers it to be a true art form.

“You’re basically painting your face and your face is your canvas.”

Originally published in the April print issue of El Estoque