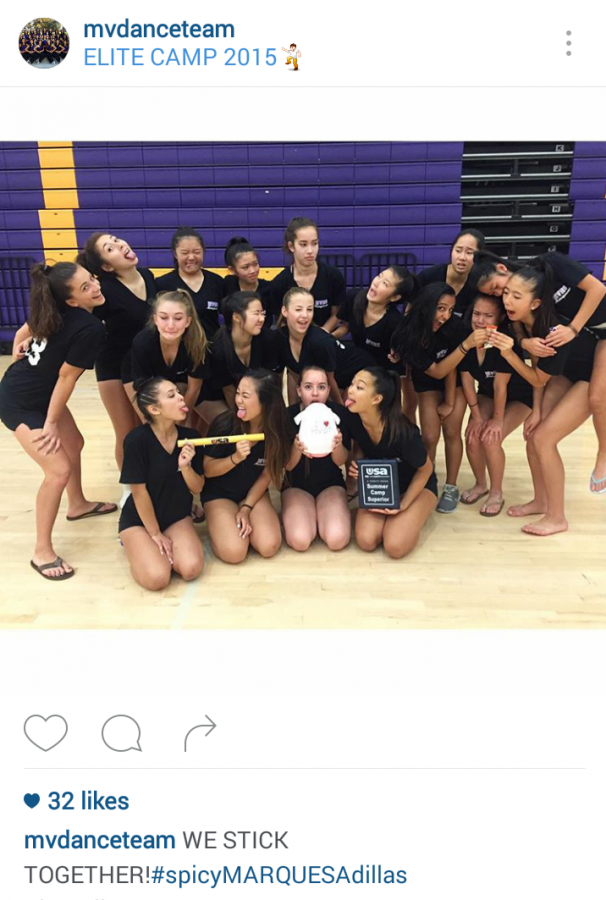 At their annual dance camp, the Marquesas have fun while improving their skills. Pictures like this one posted by the Marquesas' official Instagram include the hashtag #spicyMARQUESAdillas.

Even when talking about the “Feel the Rhythm” chant, junior and Marquesas officer Riona Guha chanted so enthusiastically that one would almost think that she was with her team getting pumped for a competition.

According to Guha, “Feel the Rhythm” is a chant that the MVHS dance team, also known as the Marquesas, say before every competition. Forming a huddle, the Marquesas all extend one leg into the center of the huddle. And thus, they proceed with the chant that they all know too well.

In previous years, the dance team has had team songs but Guha explained that they forgot the lyrics to last year’s song and never created a new one this year. Instead, the team showed their bond another way, through an inside joke: spicy marquesadillas. Not only has the inside joke worked its way into a few hashtags, it’s also become part of their “Feel the Rhythm” chant. After forming their huddle and going through the chant, they finish it off with a sizzling sound, a hiss, to go with the idea of being spicy marquesadillas.

“Every year the team dynamic is slightly different and this year we happen to be super duper close so we’ve been doing this new thing,” Guha said. “At camp we made this inside joke about being spicy marquesadillas… so now at the end of [feel the rhythm] we go ‘SSSS.’”

Other more serious backstage rituals include pep talks. Senior and co-captain Carissa Yee typically gives pep talks with her co-captain and officers to inspire the team before performing.
It’s just like a nice bonding moment as a team to get right before [a competition.]”
SENIOR CARISSA YEE
Other traditions have stuck around for a while, like the team egg, affectionately known as Bob. Sophomore Erin Lewis isn’t sure when Bob became the mascot but she knows it’s been a tradition for a while — Bob even has a Facebook account.

“The egg is our mascot,” Lewis said. “His name’s Bob and we always bring him to competitions. He had a kid last year whose name is baby Bob, or Bobby.”

Whether they’re long-standing traditions like Bob Egg or just a quick hashtag, little quirks like these keep the Marquesas closer together as they motivate each other and get pumped for Nationals.

“We just let it be spontaneous,” Guha said. “Otherwise it doesn’t really gel well with the team.”