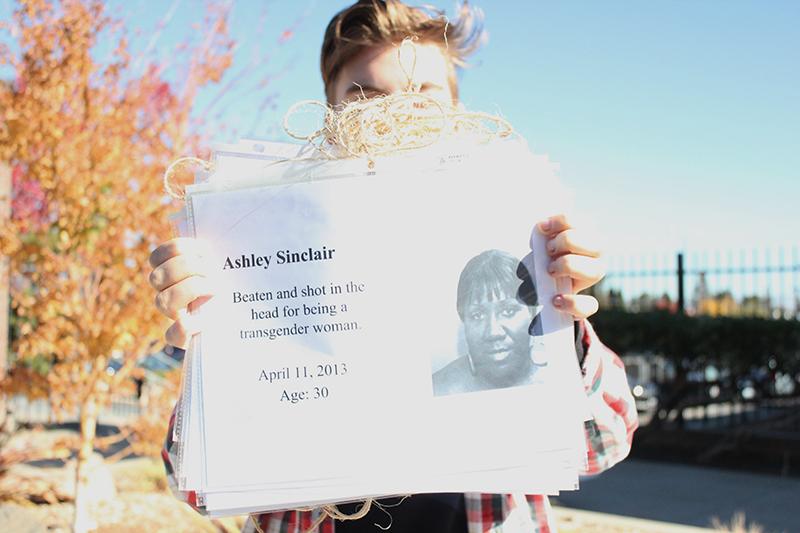 Senior Nikki Stuart, co-president of GSA, holds the banner that they will display during the vigil. The banner has the photos and stories of transgender people who were murdered or committed suicide. Photo by Sneha Gaur.

On Nov. 20, GSA will be holding a silent vigil in the academic quad during lunch to remember transgender people who have died as a result from transphobia and recognize the struggles that trans people face every day.

If you want to learn more about how to be inclusive in your language, GSA will be having a meeting on Nov. 23 in Room A208.

EE: What is GSA’s plan to recognize this day?

Senior Sierra Rodrigues: We’re going to hang a banner that has the stories of different people who were transgender and died either due to suicide or murder.

EE: Who are some of the transgender people who have been killed or committed suicide as a result of transphobia?

Senior Nikki Stuart: One that I can remember off the top of my head is Leelah Alcorn. She was a trans teen, and her parents were totally unsupportive. When she tried to present herself the way she wanted and have her pronouns respected, her parents isolated her from all of her friends. She was dealing with a lot of depression and didn’t have enough support, so she decided to take her own life.

EE: What are some of the struggles that trans people face every day?

NS: Most states have no protection for trans people at all. At school, the majority of trans students have at some point felt unsafe, have been verbally abused, avoided locker rooms and bathrooms because of fear. A large number, but not a majority, have been physically harassed. Fifty percent of trans people have been victims of rape or some kind of sexual assault by a romantic partner [as stated by the National Rape Response Services. Trans women especially have faced the most violence out of everyone in the trans community.

[According to transstudent.org] they have a 1 in 12 chance of being murdered, and trans women of color have a 1 in 8 chance of being murdered, and it has to do with the intersection of gender and race. Six states don’t have any hate crime laws, and quite a few more have laws that cover sexual orientation, but the majority don’t cover gender which trans people would fall under. Forty one percent of trans people have attempted suicide [according to the American Foundation for Suicide Prevention], which is highest out of the LGBT community and much higher than the national average. There’s also a lot of microaggressions through non inclusive language or blatant transphobic language that people either have no idea how hurtful they sound, or they don’t care.

EE: Have you seen any examples of these microaggressions at MVHS?

SR: It’s using it more as a noun rather than an adjective.

NS: We need to point these things out. This is just one example, but there’s a lot more. Like saying “your pronouns are too hard” tells trans people that they’re being a burden and that they shouldn’t be themselves around other people because it’s too hard for other people to be around them and interact with them. Speaking for myself, I understand that people are not going to be perfect all the time, but taking the focus away from trans people and their struggles is not the way to support us.

SR: You can support trans people by making sure to use their pronouns. If you slip up, don’t make it the focus. Just correct yourself and keep going with the conversation, don’t make a big deal of it. When you talk about pronouns, don’t call them “preferred pronouns” because they are that person’s pronouns. It’s not optional to refer to them with their pronouns.

NS: Another thing is that cis people have genders, but trans people just get gender identities. It’s little language things that serve to further cissexism in our world. It perpetuates the idea that cisgender is normal and transgender isn’t.

SR: And that’s what we want to bring awareness to with Trans Day of Remembrance.

NS: We want everyone to learn how to treat trans people with respect and be inclusive with their words and actions.

Come out to the academic quad at lunch on Nov. 20 to show your support.