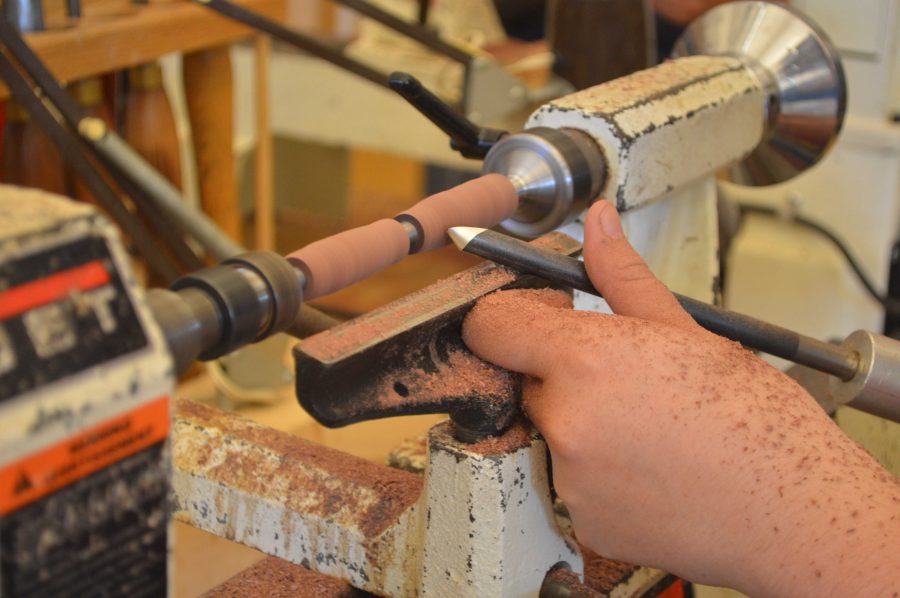 he sounds of the metal tool shaving off wood on spinning lathes fill the woodshop room at lunch on Oct. 23. During this woodshop club meeting, students work to shape their wooden blocks into cylinders. By the end of the 40 minute session, many new club members are well underway to creating their first wooden craft: a pen.

According to president junior Dara Woo, unlike many other craft-based clubs, at least half the people in woodshop club have never taken the class before. A small portion of the other members, including Woo, are woodshop veterans who could not fit the course into their current schedule.

“We created [this club] because I was in Woodshop in freshman year and I didn’t have the time to fit Woodshop 2 in my schedule, yet I still wanted to continue my passion of woodworking,” Woo said. “One day I was talking to my grandfather, and he told me, ‘Why don’t you create a woodshop club at your school?’ and I thought it was a great idea.”

During the meeting, many of the older veterans guided the new members in creating their first pen. According to vice president junior Jamsheed Mistry, older members are present throughout the whole process while creating the pen.

Newcomer junior Himanshu Chaudhary enjoyed the experience of making his first craft. He explained how the officers are really approachable, and how they are extremely helpful in teaching new people how to make pens out of wood.

“They take [you] through a step-by-step process, slowly building and teaching us how to do things,” Chaudhary said. “They all take into account how much you know about woodshop and help you accordingly on what you should do and how to do it, telling you what you’re doing wrong and how to correct it.”

Mistry said that older members explain how to cut the wood for the pen using the bandsaw, drill a hole into the wood, set-up the lathe and assemble a pen using a pen kit.

The pen is a good place to start for beginners, according to Woo, because it allows new members to experience the basic tools for the club. For first-timers, it takes two or three meetings to fully finish their first pen.

“We start them out by showing them how to make a pen because that’s the easiest project to make,” Mistry said. “It teaches beginners how to be safe, which is the biggest priority.”

However, many of the members won’t be keeping their creations. Woo states that the club is planning to donate these pens to the army during winter break.

“My hope is by Christmas, we’ll have over 20 pens to donate to the military,” Woo said. “It’s not that many, but I do think that it will be a significant amount to at least make some soldiers happy [and] to show them how much we appreciate them.”

Although Chaudhary would like to keep his first pen, he and other newcomers are aware of the plan to donate their finished creations.

“I do want to keep them, but I don’t mind because it is fun making them,” Chaudhary said. “I think it’s good that we’re giving them to the military, and we will get more opportunities to make things.”

The club is well underway to meeting its goal. According to Woo, around 10 pens have already been created, with many more being created in the process. The club advisor, Woodshop teacher Ted Shinta, is aiding the club by providing the club with pen kits and boxes to put their creations in.