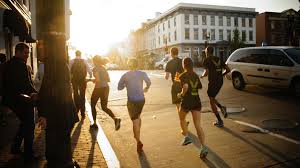 Photo by Simon Rosengren is licensed under CC BY 2.0

Daniel Lin
ust decades ago, wearing a computer on one’s hand would have been deemed stranger than fiction. Today, it has been transformed into a reality — it has even revolutionized one of our most run-of-the-mill activities: exercise. In just a matter of years, the inception of running watches has not only bettered athletes around the globe, but reconstructed our perceptions of the potential of wearable technology.

ross country coach Jodi Johnson owns a Nike+ running watch that she received two Christmases ago from her parents.

Johnson uses the GPS routing tool and the timer most often, using them to track how long she is doing her stretches and to measure the pace of runners on the cross country team.

In contrast with her day

s without a watch, Johnson feels that the Nike+ has provided her with an improved tracking performance that tells her how hard she has been running and what her average pace is. Previously, Johnson would calculate pace by running routes that she
could drive and then finding the distance.

Johnson also feels that the watch has given her a psychological edge, in that it gives her an incentive to become more focused on running. Even then, there are some drawbacks to owning a running watch.

“It sometimes makes running a little less fun because I feel I’m always running against my watch instead of just running,” Johnson said.

As for whether or not she has plans to get a different watch, Johnson is quite certain she will buy a new one once her Nike+ breaks. However, she does not plan on buying the same model, as she thinks her current one is a bit clunky. Even technology is in a race to be the best, with each new model advancing to the next.

ophomore Derek Lee has owned a Suunto Ambit2 S running watch for one year. It has changed the way he runs as a powerful motivator. Lee f

inds the ability to program the watch to be the most valuable for him, reminding him of what workouts to do on certain days. He has even taken this function as far as to remind him when the next class period
starts.

n June, sophomore Sabrina Huang, who always wanted a sports watch, got an Apple Watch Sport and now uses it to supplement her running experience, using it to track her miles, times an

Huang is still unsure whether or not she will purchase a new running watch. She plans on waiting to see what new features the next Apple watch will bring — for example, the watch does not currently have a built-in GPS application she can use. An additional feature she would like to see is the ability to see running logs on the watch itself, as opposed to going on a phone to look at them.