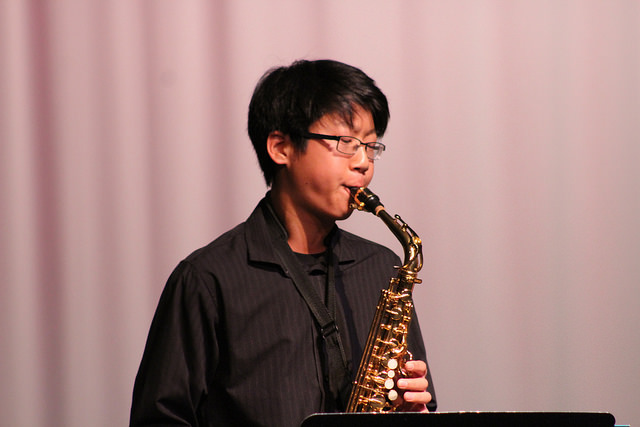 On a Wednesday night in the auditorium, a murmur spread through the crowd as family members sat in anticipation of the first jazz band concert of the year. The class was dropped off of the official schedule last year, but music teacher Ricky Alegria planned to bring the jazz band back in full force with this debut concert. The concert was composed (music pun totally intended) of three combos, or small sub-bands — The Teardrops, The Can Combo and Hot Sax. Each combo showed off the outstanding skill of jazz band throughout the three songs they performed. Typically, you would expect a pretty decent performance from a high school jazz band, but the performance that they gave far surpassed the general expectations. The audience, though small and mostly parents, was ecstatic, whooping after a particularly impressive solo and clapping wildly at the end of each song. The concert was so professional that people would have a hard time remembering that this wasn’t a performance of three professional jazz bands that had worked together for years, but student-created combos that had put together this performance in a matter of weeks.

Many may be even more surprised that the combos were able to turn out such professional performances when they hear that the class is almost entirely student-driven. Members of jazz band chose, practiced and transposed the songs to create the products that took form on the stage at the concert. Alegria chose this format for many reasons, like his belief in learning by teaching.

Choir teacher Shari Summers agrees that teaching each other helps students learn, and she has seen that in choir as well.

“It helps them become a better leader, it helps them to be a better musician because they’ve got to be on the ball and know what they’re doing,” she said. “I think it helps the other kids that are under that person’s guidance because they become more of a team [and] they learn to work together better.”

Also, when the students are working in small groups and teaching each other, they may be more able to hear things that need to be fixed that would go unnoticed in a whole-group scenario.

“Sometimes the kids will hear things that we as the conductors aren’t aware of,” Summers said, “and [they will] say ‘hey, let’s work on this’ and the conductors will say ‘Wow, good job, that I didn’t even hear myself.’”

Sophomore Dylan Evans, who plays guitar for The Teardrops, said that working as a group and helping each other out is essential to having a successful combo. He remembers transcribing music into a different key during the process so that it would sound correct when it was played by other instruments.

“For ‘Just the Two of Us,’ I had to transcribe my C part into E flat for the second page and give it to [the saxophones]. If we hadn’t caught that, it would have sounded kind of weird,” Evans said.

Evans also said that this year, they have a wide range of ages in jazz band, as opposed to previous years. Although the class has traditionally been sophomores and above, this year the course was open to freshmen, which has resulted in a diverse grade and experience range for the class.

Alegria decided to bring back jazz band after students who had previously been involved in the class came and asked about the possibility of resuming the program. He worked with the students to make it happen, bringing back a whole new kind of music to MVHS.

As Evans and Alegria mentioned, the curriculum for jazz band is extremely student-driven. However, Alegria does give them some direction in the beginning of the year to set them up for success.

Jazz band’s first concert swept the audience off of its feet with the surprisingly mature talent of the combos. The student-driven curriculum has worked to set the combos up for success and as students continue to learn and master the craft, only good things can be expected from concerts in the future.

Here are some highlights from the jazz band concert on Wednesday, October 7.