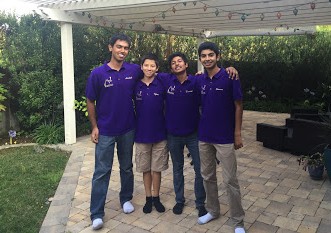 Humble Beginnings
wo years. That is the amount of time it took for robot enthusiasts sophomore Sameer Kapur, his older brother Aashish Kapur, now a freshman at University of Illinois at Urbana–Champaign, and sophomores Ninaad Sridharan and Tyler Smithline to build a business from the ground up and spark an interest in robotics among the youth in their community. Together, the four started a summer camp to share their passion and inspire children to tinker with robots the same way they did. Having accomplished all of this in two years, they have set their eyes on even bigger goals this year.

For Sameer, robotics was just a hobby he was first introduced to in fourth grade. He began his journey into the world of electronics, robotics and programming when he joined a team for First Lego League, a competition in which kids create robots that perform certain tasks against other robots. There, he met Smithline, who was also interested in robotics. Sridharan, who always had a fascination with building things, joined Sameer and Smithline in eighth grade, and the three have been working closely ever since.
In the future they could actually apply that knowledge to a real life-car or building something that could help people.

sophomore Ninaad Sridharan
It was in 2014 when Sameer and Smithline first decided to take their hobby to the next level.

“We had such a great time with robotics, learning it, building robots and just hanging out with friends,” Sameer said, “that we wanted to spread the love and passion for robotics across all of our community.”

Teaching Technology
Future Engineers Summer Camp, which takes place at Little Champs on De Anza Blvd., teaches engineering through LEGO robotics kits such as Power Functions, NXT and EV3. These are a series of kid-friendly kits designed to teach beginning students about hardware and software programming. In age groups ranging from third grade to seventh grade, children work collaboratively in groups to build robots. One highlight of camp is Battlebots, a competition in which they take learned technical skill from the class and apply it to a head-to-head fight of robots.

The mission of the camp is to get youth involved in STEM related fields, including of course, robotics. Another highly emphasized ideal at the camp is a focus on real-world scenarios. In other words, students take things they learn in school or see in real life — such as steering a car — and create robotic applications pertaining to that experience.

“In the future they could actually apply that knowledge to a real life-car,” Sridharan said, “or building something that could help people.”

At Future Engineers Camp, Sameer, Sridharan and Smithline focus on individualizing learning to better suit their students, keeping a one-to-three mentor to student ratio. These mentors also focus on attributes of a good teacher to provide their students with the best possible camp experience. According to Sridharan, a quality of a good teacher at the camp is patience and coming to camp with a good attitude.

After being recognized by the San Jose Mercury News last June, Future Engineers Camp has seen a spike in registrations, accounting for approximately 20 percent of their enrollments. There was so much interest in the camp that parents continued to call and enroll their children, right up to the morning of the first day of camp.

“When we were driving [to the first day of camp], I got a call from the mom of a student and she was like ‘Hi, I really really want to enroll my student in your camp,’” Sameer said. “We were already full, but it was really nice to hear that students are very interested in learning, and we ended up accepting him.”

Bright Futures
Kapur, Sridharan and Smithline plan to expand their summer program to attract a wider audience this year. The camp is currently targeted toward younger students, but the teachers of Future Engineers Camp strive to change that, bringing their program to a more mature audience, inspiring older students to explore fields of coding, tinkering and building. In order to reach this goal, the group plans on focusing on advertising and giving more demonstrations. While marketing his camp to students, Sameer discovered that hands-on applications spark an interest among his community. Driving an R/C car or flying a drone, for example, kindles a burning desire to learn more about engineering.

In retrospect, Sameer and Sridharan think that working at the camp has allowed them to do much more than share their passion for engineering — it has allowed them to increase capabilities such as people skills, marketing, and running a business. According to Sameer, eighth graders tend to lack experience in public speaking, technical expertise and teaching. Running the camp has made them more confident as both teachers and as aspiring pioneers in the business world.

“If there’s anybody thinking about starting a business or helping students, it’s such a great opportunity,” Kapur said. “You should definitely do it — it’s something you don’t want to miss out [on].”