Legalizing death by doctors in California 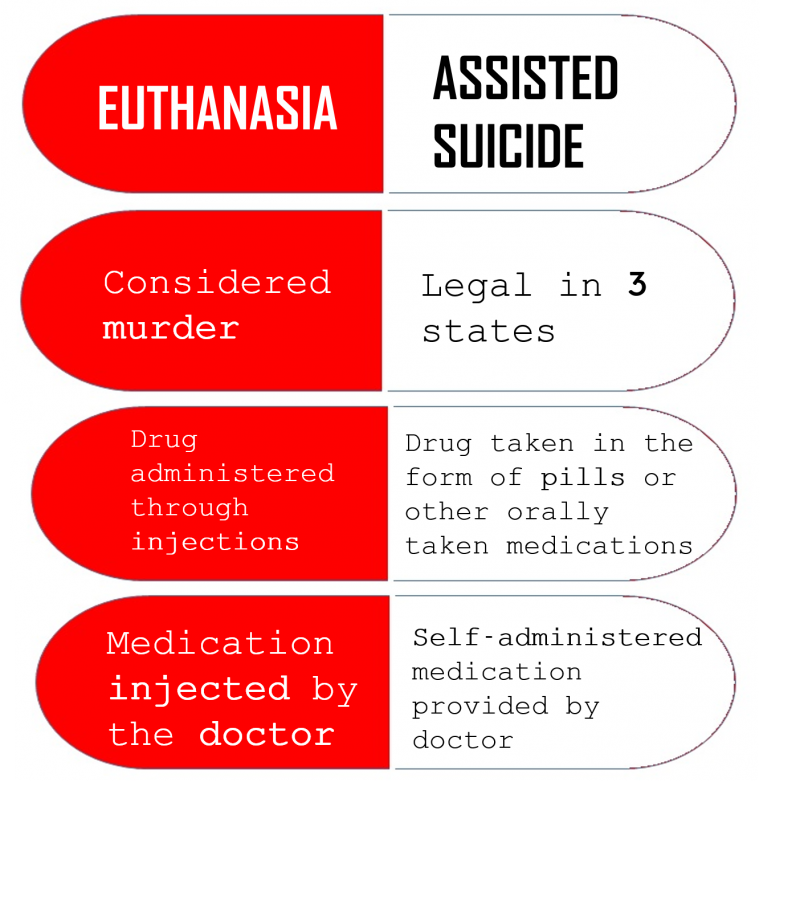 Ilena Peng
t the moment, the End of Life Option Act Bill is sitting on Calif. governor Jerry Brown’s desk in Sacramento, waiting to be signed or rejected. The bill aims to legalize assisted suicide in California. If Brown signs the bill, euthanasia will remain illegal but assisted suicide will be legalized under several restrictions. Two doctors must confirm that the patient has less than six months to live and have talked over other alternatives to assisted suicide first. The patient must also be in sufficient mental health to make the decision and three formal requests must be made before the suicide.

It seems people tend to use the terms euthanasia and assisted suicide interchangeably, but there is a dramatic difference between the two. The difference is in how the medication is administered.

Senior Mariana Miranda agrees with the strict conditions that the new bill proposes a patient should meet.

“If you’re going to allow something like that you’d need a lot of restrictions,” Miranda said.. “The patient has to be mentally well enough to be able to decide their own fate.”

Freshman Amanda Wilson has a neighbor who is fighting cancer. Wilson finds it hard to see someone she knows so well experience so much pain. Although she hates to think about it, Wilson admits that if it did come to the point where assisted suicide was in the picture, she thinks it should be permitted. Wilson believes that continuing to pay for medical bills, combined with the constant shadow of knowing a loved one could die any moment, is torturous. Although Wilson definitely believes this is a last resort, she thinks it should definitely be an available option to those seeking it.

“I like [the options that are opened through] euthanasia,” said Wilson. “I think people should decide whether they want to live or not.”

An anonymous freshmen had a friend who recently died from heart failure. Since assisted suicide was still illegal at that time, her friend passed away in the hospital after failing to find a heart donor.

“Euthanasia probably was a better choice,” she said, imagining her friend’s experience. “You’re just laying in bed suffering until you die.”

She hates knowing that her friend was resigned to spending the last moments of his life in the hospital waiting to die.
“It’s definitely a controversial thing,” she said, “but I feel like if they’re prepared to die then they should just be able to put an end to their misery.”
Deciding to legalize assisted suicide is certainly not an easy decision; so far only three states have legalized assisted suicide. Calif. awaits to find out whether Governor Brown will join those three states in making the option of assisted suicide open to those suffering from terminal illnesses.