SAT study time should be integrated in a personalized schedule 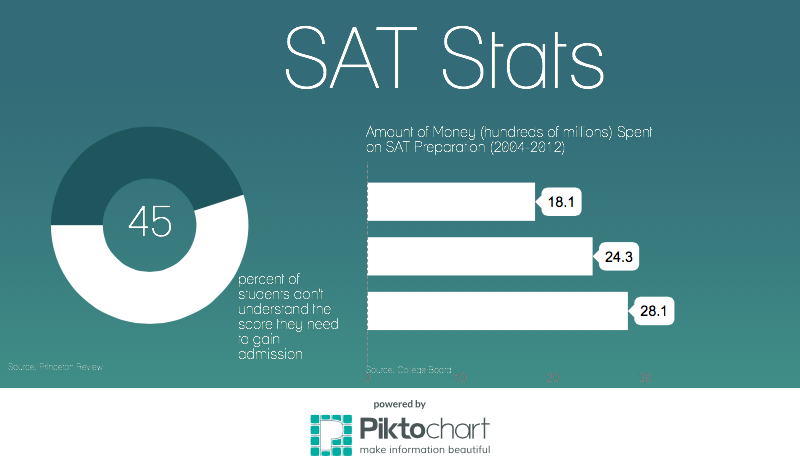 On May 2, according to the College Board, over ten thousand high school students nationwide will take the SAT. Their average will hover more or less in the 1500 range, several scoring more and several scoring less. All of these students know the purpose of the exam: to apply for admission at several of America’s universities. Yet as they go through the motions—they have to suffer through a five-hour exam after all—many are lost, completely unsure of the score they will receive, an uncertainty that lies across the score range. Forty-five percent of these students don’t understand the score they need to receive to gain admission to their target university and the way to reach it, according to an October 2014 study conducted by Pew Research Center.

Exactly one year ago, I was one of the kids in the SAT room. I remember struggling through all three sections — critical reading, math and writing, praying that I would do well. It was my third time, and I knew it would be my last. Thankfully, several sleepless nights and long weeks later, I received a good score: 2350. Not perfect, but a strong score even for the schools I intended to apply to.

The road to my SAT score of 2350 was paved with sweat and test-prep books. I exhausted four in total: Barrons, Kaplan, McGraw-Hill and the College Board book, in addition to completing other tests I found on websites. In addition, I took several previous tests I found on websites. The winter break before the test, I remember taking one test every day. The week and a half leading up to the May SAT, I remember taking two every day.

Thirty tests and 100 hours later I reached my goal, but was it worth it? In a sense, yes, I was accepted to one of my top choice schools. But could I have used that time more wisely? It’s difficult to say. I’d say those sleepless nights and long hours spent grinding away at practice tests were worth it, yet several others would reply with a common argument: that this time could be better used elsewhere.

The problem with what several people say about the SAT — that your time is better spent doing other activities — is only a half-truth. Sure, the time spent doing SAT prep could be spent doing other extracurricular activities such as volunteering or playing an instrument, but this is a false equivalence. The SAT takes 50-100 hours in extreme cases to prepare for: those scoring above 2280 spending approximately 45 hours studying on average according to Princeton Review, and this amount of time spread out over one to two years can be either negligible or immense, depending on the individual. These hours, through diligent time-management, could be integrated into a well-rounded, healthy schedule which still affords the student ample time to pursue other interests, whether they be career-oriented extracurriculars or for leisure.

Even if the student in question fails to receive his or her ideal SAT score, at least he or she can walk away from the testing center knowing he maintained a healthy schedule in spite of tough goals.

That’s what I ultimately what I recommend to all those who feel lost about the SAT: try as hard as you can, do as many practice tests as you can fit within a balanced schedule and rest at ease knowing that your standardized test score does not prevent you from college admission. In the end, each individual has their own priorities, with SAT studying fitting differently in each individual’s schedule.