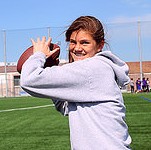 *Correction: Seniors won against freshman by 28 points not 21

MVHS holds a Powderpuff tournament each year, where the girls get the football and the guys get the pom poms. The games will take place this week, but players and cheerleaders have been practicing every Tuesday and Thursday at lunch since Feb. 2. The football team vigorously trains, receiving special coaching from a few hand-picked football players. And cheerleaders work to perfect their routine choreographed by girl dancers and cheerleaders for the halftime show.
First Round Games:
Wednesday, March 25
Class of 2015 vs. Class of 2018