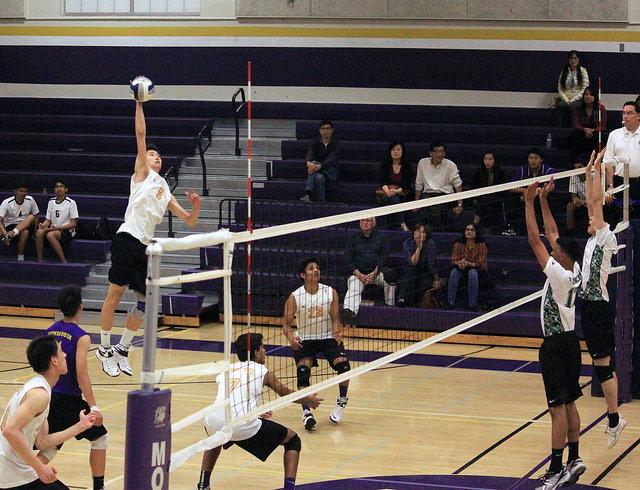 MVHS had a league record of 1-0 and an overall record of 11-0, but they soon realized that they are not invincible, even to the Eagles who only had one loss and one win to show for their overall record. The Matadors won 3-0(25-18, 25-15, 25-12), but their unforced errors made for an unnecessarily competitive match.

“Mountain View was the first game of the season so everyone was really pumped up,” captain senior David Chang said. “But this game, we weren’t expecting too much out of it and so we started out slow.”

The Matadors expected to sweep but the first set began with the Eagles ahead. Senior Matthew Ho of the Eagles immediately took the first point of the match with his strong top-spin serves. The Matadors struggled on this serve-receive rotation throughout the game and only took their lead in the first set until Ho’s serving streak ended

At first glance, the Eagles don’t have the height that the Matadors do and with only two seniors compared to MVHS’ seven, the Eagles don’t have the same experience that the Matadors do either, yet the Eagles kept up with consistently tough serves and scrappy play. Every now and then, Matadors’ passes connected to sets which connected to hits, producing outstanding kills similar to those seen at the game against the Spartans.

With solid passes and blocks softening the blow of the Eagles’ hits, the Matadors were clearly the better team and were winning for most of the match; however, MVHS was plagued by missed serves, net violations and shanked digs that kept the score too close for comfort.

“[The] competition wasn’t that great tonight,” coach Paul Chiu said. “I think we played down to [the Eagles’] level and we were not doing anything particularly well.”

The second set saw many missed serves as well, but the Matadors cleaned up their act and connected well enough to generate a crushing offence against the Eagles. The Matadors went on a three point streak at the beginning of the set with three straight kills. By the third set, the Matadors were still confident — they had won the two sets before. They just needed one more to win the match, but Ho from the Eagles was back starting the set.

Senior Kevin Zhang shanked Ho’s all-too familiar top-spin serve and then he shanked it again. Sophomore Prathik Aman-Rao passed the ball, but the hit went into the net. 3-0. 4-0. 5-0. 6-0. 7-0. The Eagles were on a run and every Matador, including Chiu, was angry.

Junior Alex Li channeled this anger into his play as on the eight point, he pounded the ball down the line from five, screaming at the Harker Eagle he had just pummeled. MVHS took its game back.

“After we were down seven nothing, I think everything went back to normal,” Chiu said. “The kids executed the way we are supposed to execute and we took that third set ultimately pretty easily.”

As Chiu explains, the team was down 7-0 and went on to win the set 25-12, so they closed the set 25-5. The Matadors’ mistakes inflated the Eagles’ score throughout the game, but toward the end of the third set, the undefeated team had returned and won the match 3-0.

Although they won the match, the Matadors trailed the Eagles by points at moments in each set — they were not invincible.

“It’s easy to relax and think ‘we can beat them without trying,’” captain senior James Mullen said. “But in volleyball you always have to put some effort in there and that’s something we can work on.”