Friday the 13th. A dreaded time of gloom, misfortune and beating the dead horse of a movie franchise over and over again (for those interested, Paramount Pictures is planning to release the thirteenth 13th “Friday the 13th” movie on May 13, 2016). At least, that’s what it was if you didn’t go the the MV Drama Showcase. 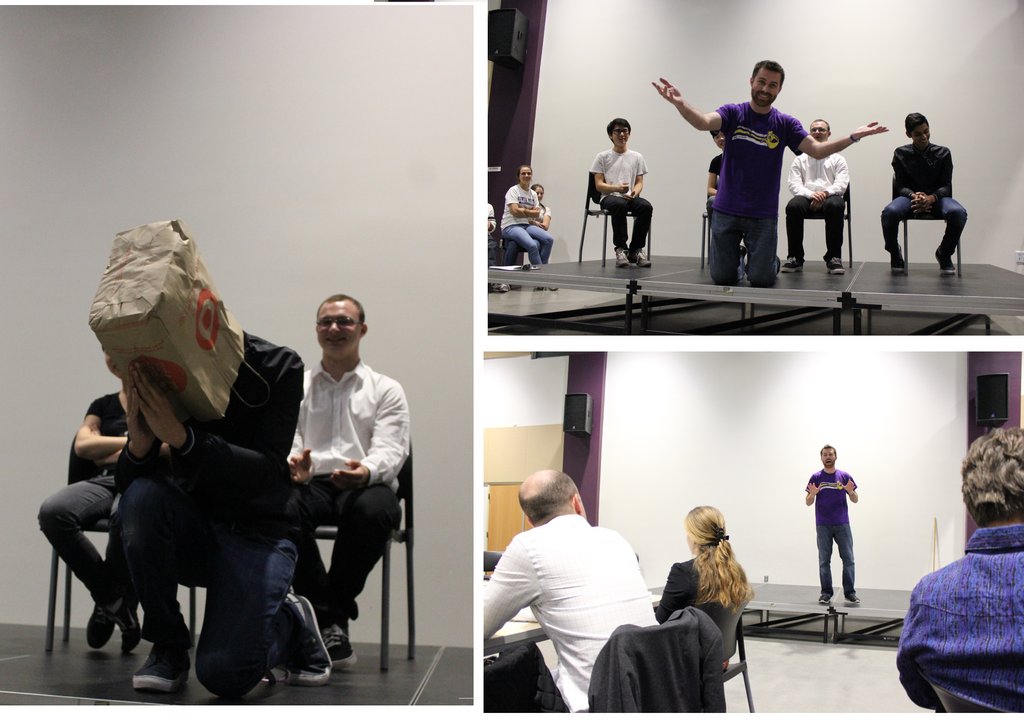 From 7 to 9 p.m., MVHS Drama and the Improv Club hosted the MV Drama Showcase for the Andrew Segal Memorial Scholarship competition. The night kicked off with a short introduction by junior Hari Ganesh and class of 2014 alumnus Alexander Pieb. English teacher and Improv club adviser Matt Brashears then took the stage, explaining the event to the audience and teaching them the lingo and gestures to use throughout the night. He signalled audience participation with the phrase “tonight’s loyal fans” and told them the punishments for bad puns and inappropriate behavior (apologizing on knees and wearing a brown paper bag on the head). He introduced the MV Improv Club, whose members yelled, gestured and dragged each other around like ragdolls as they adapted to the audience’s increasingly outrageous suggestions. Smooth jazz flowed in the air during the intermissions. The audience ate their salads, lasagna and chocolate cakes while chattering about the act they just saw, plans for the February break and life itself. The night continued with the sound of applause, laughter and that one guy who kept shouting “Cuba” and “Fidel Castro” for every suggestion.

While it is filled with comedy, the event honors a former drama student who passed away several years ago. In 2009, Andrew Segal, a class of 2007 alumnus and a member of the Arizona Repertory Theater at the University of Arizona, died of a previously undiagnosed heart condition. In 2010, with the help of then-MVHS Drama teacher Holly Cornelison, his parents created the Andrew Segal Memorial Scholarship in his memory to help other aspiring drama students throughout the Fremont Union High School District achieve a future in theater arts.

“We wanted to find a way to honor our son and we couldn’t think of a better way than to have a scholarship here at MVHS where he was a student and a member of the drama community,” Mitch Segal, Andrew’s father, said. “We thought we would broaden it to cover all the high schools in the district and be able to honor him by awarding a scholarship to someone who wanted to pursue theater at the university level.” 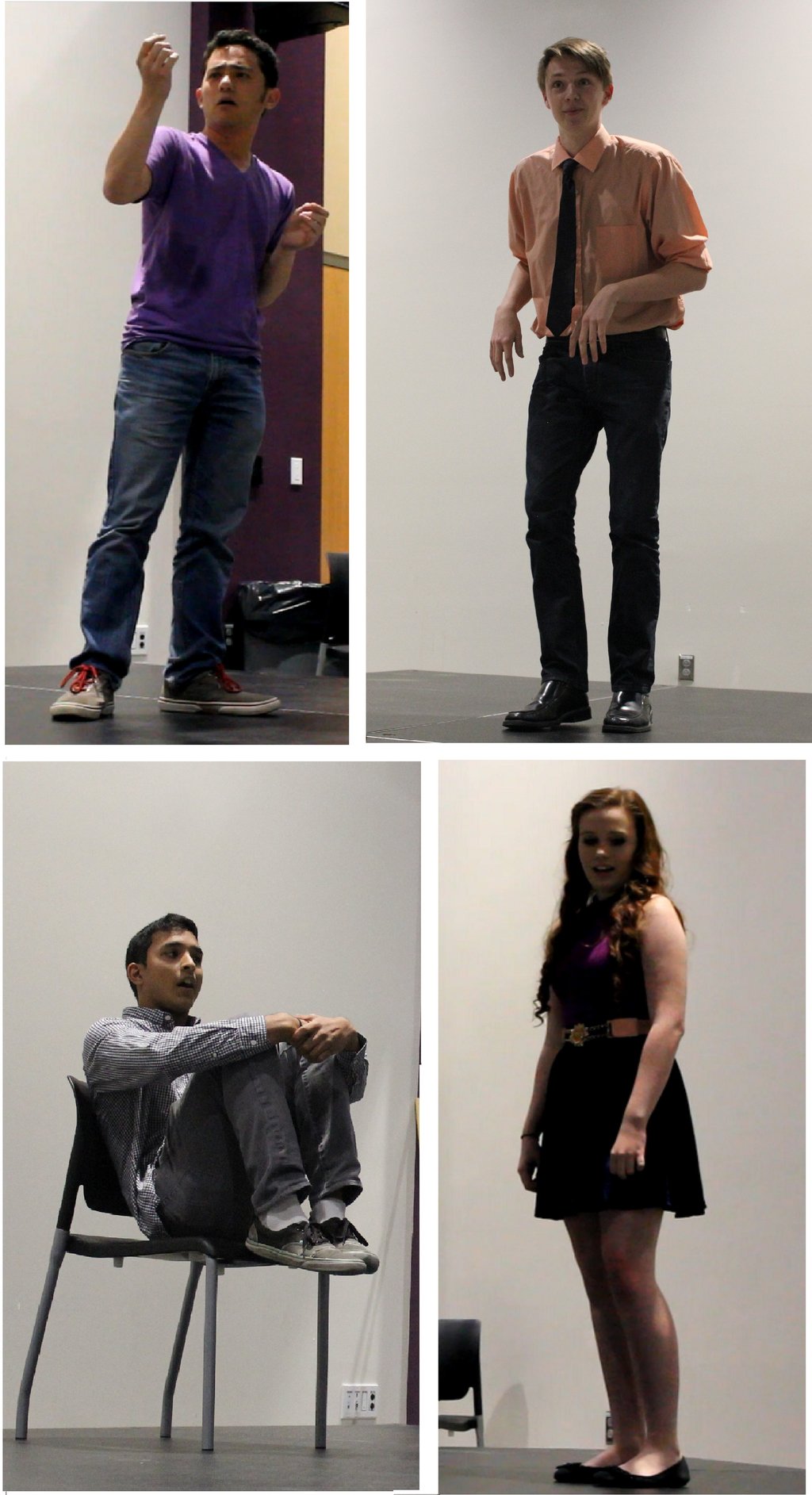 Every year, auditionees perform a monologue in front of the judges and audience for a chance to win a scholarship of $2,500. Some spent weeks preparing for the spotlight; others channeled performances finished years ago. This year, seniors Marshall Pangilinan (CHS), Parker Kaeding (FHS), Akshay Savale (MVHS) and junior Michaela Murphy (MVHS) competed for the scholarship. Pangilinan combined humorous tone and gestures (pelvic thrusts) during his rendition of the virginity monologue from the Shakespearean play “All’s Well That Ends Well” to win the competition and earn the scholarship.

While the actors were taking a break in between the sketches, the audience was served dinner as the Monta Vista Jazz Band played in the background. The band consists of juniors Peter Kim (drums), Kartik Jain (bass guitar), Isabel Zou and Suhas Anand (alto saxophones), Jay Lee (keyboard) and senior Joey Wilson (tenor saxophone). The sextet smoothed out the dining experience with half a dozen jazz songs to fill in as entertainment. While the audience was busy eating and chatting, several members would occasionally sway to the music’s rhythm. After one particularly intense drum solo by Kim, the entire room, even on the actors’ side, was booming with cheers.

Overall, the audience enjoyed the performances, with numerous members complementing the joy and humor the actors brought to the stage. Nearly all the members put forth suggestions for the Improvisation sketches.

“Everyone [at the showcase] was having a good time,” Class of 2013 alumnus Vineet Vijaykumar said. “I just thought the atmosphere was very casual, it was very nice; people got to talk, people got to eat, you got to meet new people, you got to see wonderful acts by the people who did the Improv show and overall, it was just a wonderful experience.”

Besides being a scholarship contest, the showcase provided a valuable chance for the Improv Club to showcase their skill in adapting to any given scenario. For the actors, it was a great show of their progress through the school year. The club, which meets every Thursday at lunch in room C209, spent around 20-30 hours preparing for the Showcase, according to Improv Club member senior Samantha Shieh.

“It’s been really great watching these students over time,” Brashears said. “This is really the big show that we have during the year so it’s really an opportunity for people to shine and show off what they’ve learned and just have a blast.”