La Pluma releases its first issue of the year 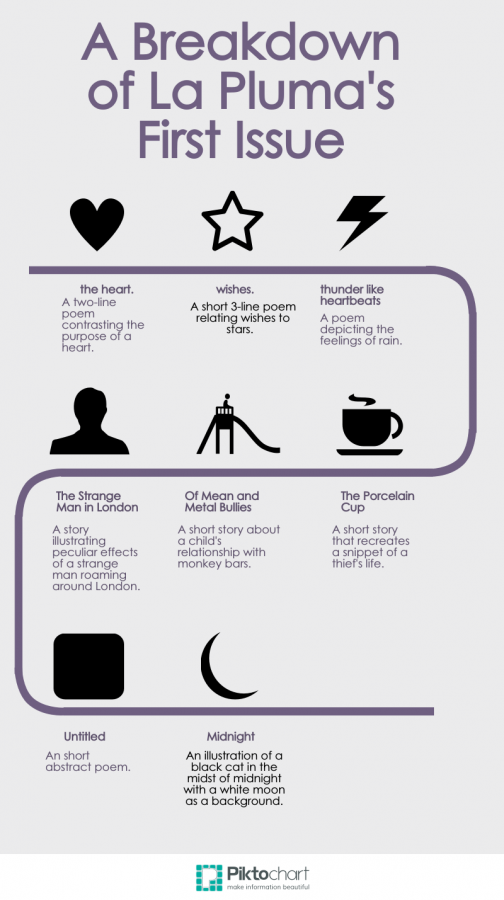 Aditi Desai
“Her knees touched the tip of her nose. Her voice repelled the idea of returning to defend her inability to do something other could. They were right. She was different and she couldn’t do what they could.”

This is a part of a short story called Of Mean and Metal Bullies, published by La Pluma in their first issue. La Pluma is a literary magazine that releases issues periodically during the year. It was created about five years ago and its issues consist of a variety of poetry and prose and art.

“Over the years, La Pluma has evolved into [not] just a literary magazine [but into] a club that incorporates art as well,” senior Tara Kumar said. “It doesn’t cater to just writers, but to artists of all types.”

La Pluma receives about 20 submissions per issue, submitted by students from all grades and classes. The La Pluma staff narrows down the submissions to eight final pieces which are later published in their issue. According to Kumar, La Pluma is intended to bring out creativity among MVHS and encourage them to submit their unique literary pieces. Below is a breakdown of the pieces included in La Pluma’s first issue. 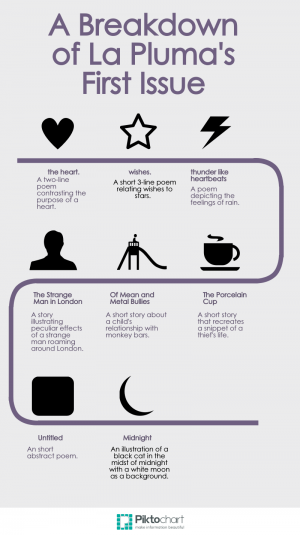 “Students in English class mainly write what their teachers want them to write. And they follow a certain prompt,” Kumar said. “[La Pluma] encourages them to open up their writing skills and encourage them to write about topic[s] they usually don’t write about. It encourages creativity.”

For its first issue, however, La Pluma was not received as widely as it expected to be at MVHS.

“I know that [La Pluma] publishes poems and art. I would probably be motivated to check it out but I haven’t. I just haven’t had a lot of free time but if I did, it seems like something cool to check out,” sophomore Sithara Menon said.

The lack of awareness of La Pluma in the MVHS community has caused for a deterioration in the willingness for students to read its issue. La Pluma conducts after school and school-related activities that encourage participation and awareness towards their club. Some students, however, are confused as to what the club is really about.

“I don’t really read [La Pluma] because I wasn’t really aware [that it had] print issues,” junior Shaili Davuluru said.

La Pluma offers public activities outside of school such as college editing and writing workshops to help benefit students in their academic lives as well as in hopes to bring more awareness toward the publication.

“Last month we installed a large art piece above the cafeteria, and it showed many students how creative La Pluma is,” Kumar said. “Through the art piece we also asked for students to submit their pieces to us, which helps them contribute to our club.”

La Pluma’s aspires to establish a stronger presence in the MVHS community. It plans on reaching out to students through writing and art shows that occur throughout the year.

La Pluma’s next coffeehouse will be held next March.